The smell of burned hay and grass wafts through a village of Podorašac near Konjic in Herzegovina while Maitham Hasan Hussain Ali Kamal and his family make their way to their summer house. The property needs to be tidied up before their arrival.

Ali Kamal is a foreigner and cannot own real property in Bosnia and Herzegovina (BiH). So his company Cliff House nominally owns this property. Until recently its director was Kemal Habibija, a counselor and deputy chairman of the Ilidža Municipal Council.

According to documents the Center for Investigative Reporting in Sarajevo (CIN) acquired, Habibija took advantage of the estate to obtain government grants worth 50,000 KM for his veterans’ co-op HERCEG-NATUR. In exchange, he pledged that the co-op would hire unemployed veterans to plant raspberries.

Ali Kamal said that he didn’t let Habibija’s co-op to lease his land and that his former director abused his office.

Even though the business failed and the raspberry plantation was abandoned, the relevant institutions say that the investment was justified.

Firm Gets the Estate

Several years ago, Maitham Hasan Hussain Ali Kamal, a former pilot from Kuwait, came to visit friends in BiH. He liked what he saw, so he bought an estate. According to the BiH laws, a Kuwaiti citizen cannot own land in his own name.

His friends introduced him to a lawyer named Dino Jajagić, who advised him to set up a company to buy property. In 2015, Ali Kamal and a cousin incorporated Cliff House in Sarajevo. They hired Jajagić to deal with legal issues and bookkeeping and Jajagić, said Ali Kamal, suggested that they hire Habibija as director. At the time, Habibija and Jajagić were colleagues in the Party for a Better Future.

“Here we don’t appoint managers with some high business school (degrees); there’s no need for that,” Jajagić told CIN. He added that he often works with Arab firms and explained that they are small start-ups.

“People don’t know exactly what they are going to do,” Jajagić said. “So, they set up a firm reasoning, ‘Well, we’ll see in due course what we’re going to focus on, let’s first set up a firm”’.

Jajagić said that the firm specialized in car rentals at first. Yet, the owner Ali Kamal, says that his original goal was to buy land. He said that he would have liquidated the firm if he could have owned property in his name. The firm only makes expenses for him. “I pay for nothing,” he says.

A business partner and a cousin pulled out of the firm not long after it was incorporated. Meanwhile, Ali Kamal paid 220,000 KM via the firm to buy around 27,000 square meters in Podorašac with a house, an additional building, orchards and fields.

Jajagić helped him track down that property, Ali Kamal told CIN. He said that he had renovated the house and planted raspberries.

It so happened, that the FBiH and cantonal ministries for veterans’ affairs in Sarajevo were giving away grants to veterans’ co-ops. These co-ops are firms with at least five founding members who should be veterans or their family members. In the beginning of 2017, Habibija with his wife Belma, brother Džemal and his wife Maja, as well as friend Enes Čorbo, founded a veterans’ co-op HERCEG-NATUR. Kemal became its director, a coordinator and a project leader. Habibija got an idea how he could profit from his double directorship at Cliff House and HERCEG-NATUR.

“Then I figured out, Kemal Habibija being Kemal Habibija, what could I do? I’m a director of this (Cliff House, author’s note) and I created a co-op,” said Habibija. “Let’s try to unite all of that.”

Ali Kamal recalls that Habibija had an idea about making raspberry jam. The co-op would supposedly invest 10,000 KM in the business and they would share the profit “50-50”. However, the Kuwaiti said that he did not understand what a co-op really meant and that Habibija never told him that he was personally linked to HERCEG-NATUR. They never formalized the agreement.

However, in the beginning of 2017, Habibija made a contract with himself. In the capacity of Cliff House’s director, he signed a contract in which the firm agreed to co-operation with a certain Kemal Habibija to plant raspberries and other fruit as raw material for the production of juices and jams. According to the contract, the firm provides orchards in Podorašac and Habibija invests 55,000 KM. The profit was to be split evenly.

Ali Kamal said that he learned of the contract in mid-2019 and that journalists told him that Habibija was the co-ops founder and director.

“He should ask me first, right? To do all these things,” said Maitham. “I should sign, not him. As a director he, I think, abused (his authority).” Maitham added that he did not authorize his director to sign contracts, nor did he let the co-op use his property.

“So he says,” Habibija reflected on Maitham’s words. “I might tell you another story while you have another thing on your mind. We are all entitled to our opinion.”

The Secret of Raspberry Jam

Soon after incorporating the co-op in 2017, Habibija submitted the contract and other required documents to the ministries for veterans’ affairs to apply for nearly the full sum he would invest into a new business. In his grant request, he wrote that the co-op needed money to hire veterans as workers on raspberry plantations.

In the same year, the co-op received 30,000 KM from the Federation of BiH, and then another 20,000 KM from the Sarajevo Canton as grants for hiring former soldiers and their family members.

By October 2018, all this money was gone. The Habibijas and people and firms connected to them gained the most. According to the reports, most of the money was spent on salaries and equipment: a chain saw; a string trimmer; a two-wheel tractor and a car. The co-op bought this equipment from Kemal and Belma Habibija. The co-op also employed Kemal’s brother Džemal.

CIN reporters came across Džemal at the Podorašac estate last year as he was waiting for commission members who were inspecting how the grant money had been spent.

“I’m here very rarely. I’m a guest here, just like you, come to think of it,” Džemal Habibija told CIN. The co-op had hired him full time. Around 10,000 KM of the grant money was spent on his salary and benefits.

For a year, the same status in the co-op held Džemal’s party colleague and agronomist Asad Jelešković. Both are in the Party of Democratic Action. He told CIN that he only advised the co-op and would visit the raspberry orchard only if there was a need. He had a lot of work to do in his own raspberry orchard. More than 10,000 KM was spent on his salary and benefits from the grant money.

“The place was in dire straits when I arrived,” Jelešković said. “The raspberry orchard was very neglected.”

Occasionally, the co-op hired Dino Habibija, the brothers’ cousin, and Hasan Bajrović, their neighbor and Kemal’s former party colleague. Another 2,000 KM was spent on legal and bookkeeping fees to Jajagićs’ firms.

A year later, the raspberry field was overgrown with weeds and in his reports to the ministries, Habibija claimed that the business failed because of the low wholesale purchase price of raspberries. The ministries’ officials accepted that explanation and found no fault with the fact that 50,000 KM was spent on a failed business.

Adem Šačić, the former chair of the FBiH Commission for Approval of Grants, said the requirements for approval of grants were met, and spending reports were done as required. “In order to plant raspberries, he had to have a certain amount of square meters of land as he has shown to us,” said Šačić. This was enough for the ministry and it did not ask for other evidence or clarification.

Cantonal officials did not want to discuss how HERCEG-NATUR spent its money. A letter signed by Minister Ismir Jusko reads that the money was spent on hiring and that the spending was justified.

Tourism as New Line of Business

In August 2018, Habibija was terminated as Cliff House director. He turned his attention to the ministries in search of new grants for his co-op. This time, he had an idea to profit from the surge in tourism at the Jablanica Lake – by offering Arab tourists rafting, motorized boat rides, swimming and lodging in bungalows. The FBiH ministry turned down his application because the co-op had abandoned the raspberry business.

But the cantonal ministry approved 10,000 KM. Then minister Muharem Fišo said that tourism was profitable and that he was glad to see people with ideas. Habibija had an idea to take tourists from Jablanica Lake to the Podorašac estate.

“So that they can pick raspberries,” said Habibija. Everything stopped, he said, because his wife fell ill.

According to the report, more than 3,000 KM has been spent on Habibija’s salary and benefits. At the time, Habibija as a councilor also received a monthly attendance fee and commission allowances. His co-op stopped operating last year with a 15,000 KM loss.

Sarajevo Canton Ministry for Veterans’ Affairs wrote in a letter that this grant was justified because, “it is understandable that all co-ops cannot pull through and continue to operate after the subsidizing of veteran population’s employment (has come to an end)”.

Habibija said he was not giving up on the co-op. “That’s a living thing. God will decide when I will do it, when I will be able to think about it, to get involved,” said Habibija. “That’s the only question.” 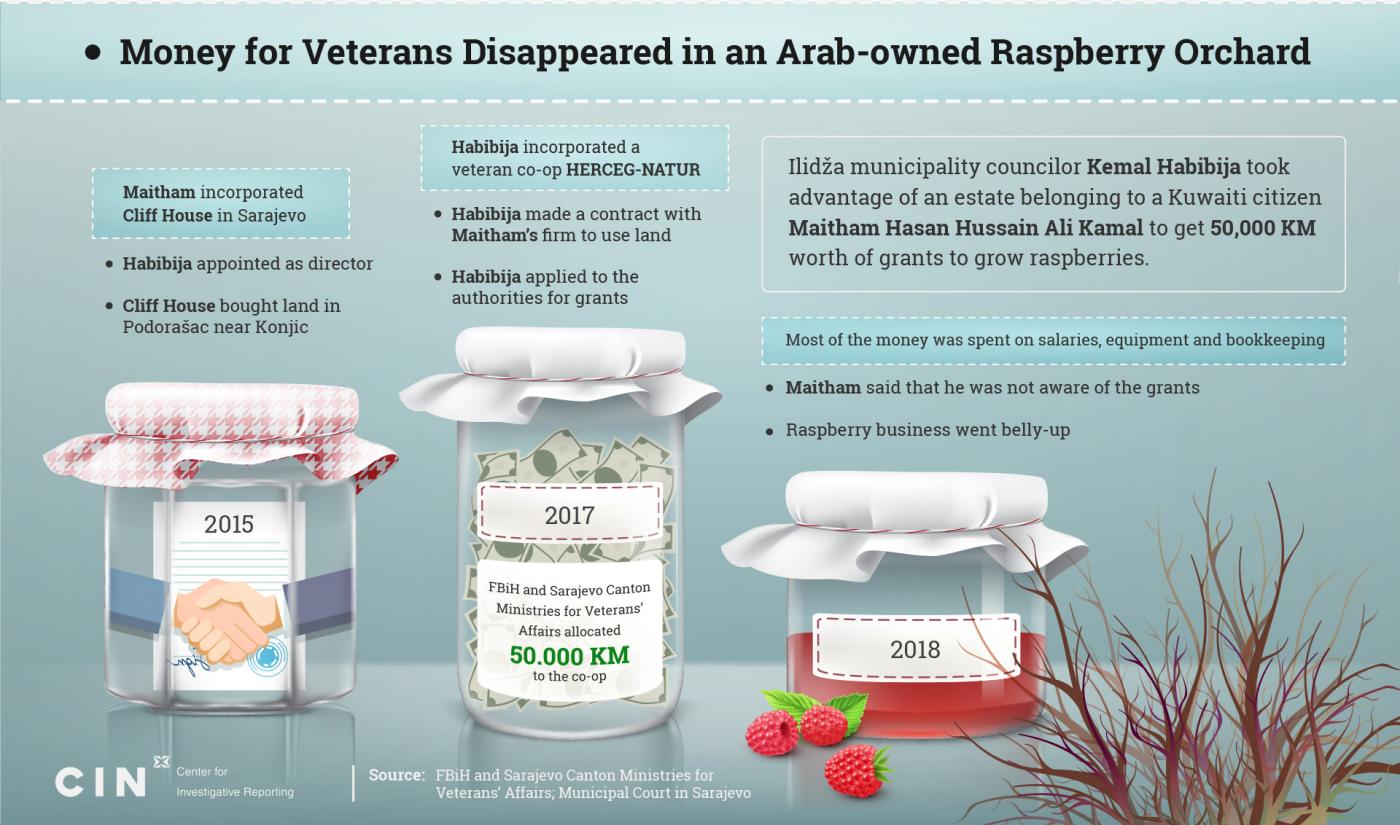