Rodoljub Radulović, accused of being a senior member of an infamous Balkan cartel, controlled at least two accounts at Credit Suisse. One was suspected of being used to launder cash from drug transactions. A second, previously unknown to authorities, was allegedly used to protect his ill-gotten assets. 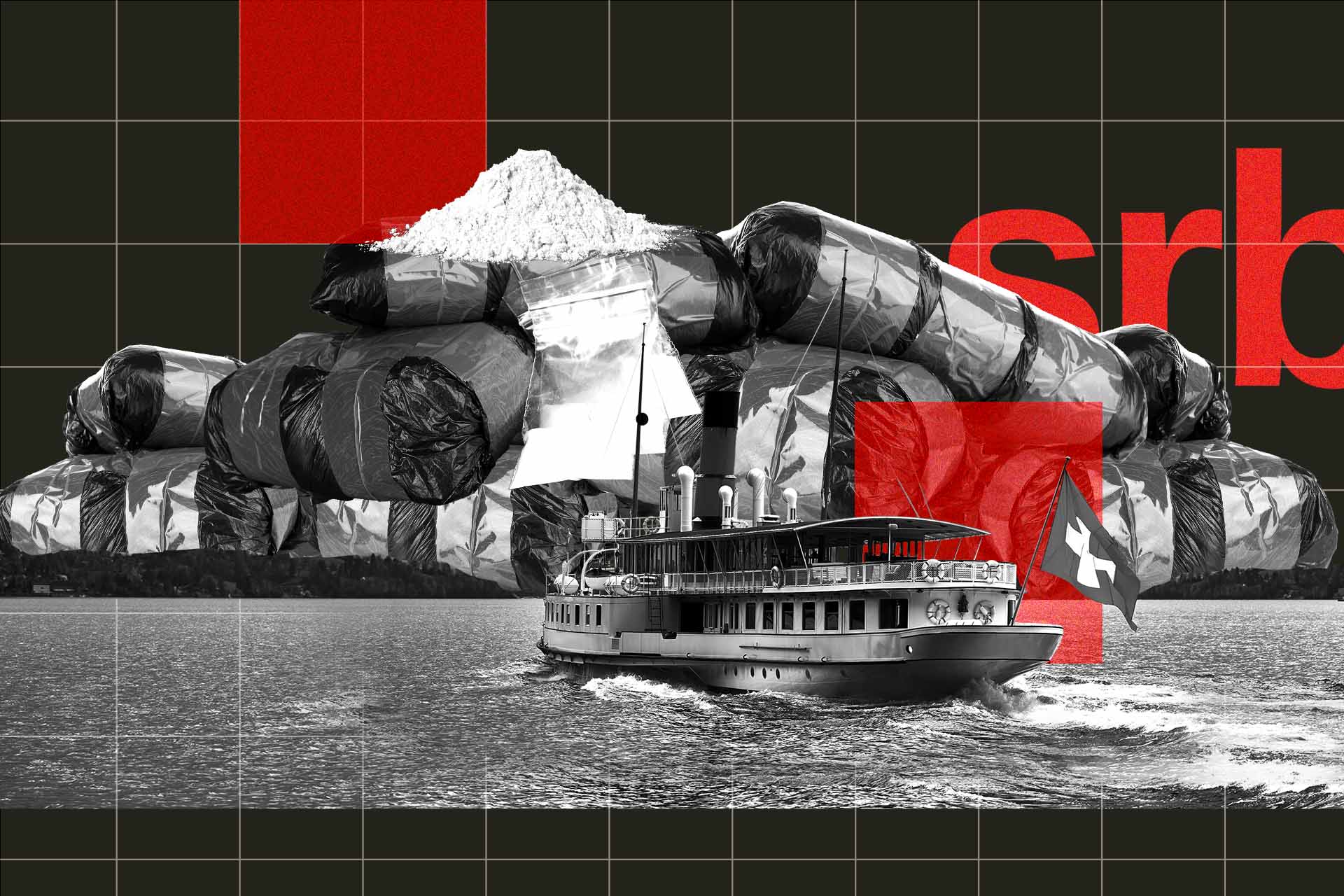 It should have been hard for Rodoljub Radulović to set up bank accounts in Switzerland. By 2005, the Serbian was more than $15 million in debt, under investigation by the U.S. Securities and Exchange Commission (SEC), and facing multiple creditor lawsuits and foreclosures.

But despite these red flags, Credit Suisse’s Zurich branch apparently saw nothing amiss when it opened two accounts for Radulović: one in 2005, a few years after the SEC began its probe, and another in 2007.

Journalists discovered these accounts, one of which held millions of Swiss francs, by digging into data obtained in the Suisse Secrets project. One of the accounts, listed under the name of an offshore company, was unknown to prosecutors investigating Radulović’s financial affairs.

Because the Credit Suisse data obtained by journalists is incomplete, there are a number of important caveats to be kept in mind when interpreting it.

As well as his questionable financial dealings, Radulović is suspected of involvement with a leading Balkan drug cartel run by Darko Šarić, a Montenegrin drug baron, and faces cocaine smuggling charges dating to 2012, involving a 1.8-ton haul.

Radulović, known as “Misha Banana” for his penchant for hiding cocaine in banana shipments, would not close his Credit Suisse accounts until May 2010, almost a decade after the SEC launched its probe of his affairs, and a month after his partner in crime, Darko Šarić, had been indicted on drug charges in Serbia. In 2012, Radulović himself was charged over the same case — but he had gone on the run. He hasn’t been seen since.

While both his accounts appear to have been closed just before the net tightened on his drug case, the fact that he was able to open them at all, long after he became a target of U.S. authorities, raises serious due diligence questions for Credit Suisse, experts say.

Maira Martini, an expert on anti-money laundering at Transparency International, said there should have been “zero” chance that a major bank wouldn’t notice someone who had been in trouble with the SEC — which issued a press release when it filed charges against Radulović.

“These types of things, it would be very difficult to miss,” Martini said.

Radulović’s lawyer declined to comment, saying a Serbian investigation into the Swiss accounts was still open.

Radulović, whose location remains unknown, was handed 10 years in prison over his drug charges after a trial went ahead in his absence. His sentence was later overturned for procedural reasons, and a retrial continues in Belgrade.

Radulović, who lived in Florida for years, earned an estimated tens of millions from so-called “pump and dump” stock market manipulation and fraud. Key among his holdings was his firm Ramoil Holding, registered in the Cayman Islands. In U.S. court records, Ramoil is described as a “sham” company designed to move money — Radulović’s ill-gotten gains — between his various firms through international transactions.

In October 2001 the U.S. SEC charged Radulović, some of his associates, and a Nevada-based company he owned, Ramoil Management, over a “$3.3 million market manipulation scheme.” The group was accused of falsifying Ramoil audits and making false public statements through press releases.

Those statements, which falsely promised that Ramoil would soon be listed on the NASDAQ stock exchange, “drove Ramoil stock price from $7 per share to an all-time high of $20,” according to the SEC. Next, 1.8 million Ramoil shares were dumped into the market. The end result, the SEC said, were “profits of approximately $3.3 million” for those connected to Ramoil.

The U.S. Attorney’s Office in New York City had brought fraud charges and issued an arrest warrant for Radulović in 2001, but he had disappeared. Eventually in 2003 the court issued a $1.9 million default judgment against the Serbian citizen. A second judgment was issued in a 2003 civil case by a Miami judge for $12.1 million for defrauding an oil company. With a judgment against him, banks moved to foreclose his property, including a waterfront Florida home.

Undeterred by any of this, Radulović simply switched locations and diversified. In the early 2000s he showed up in Belgrade and began living the high life, visiting luxurious tennis clubs and cavorting with film producers.

In Serbia, he made new alliances, setting up businesses in fruit imports, hospitality, and real estate, and forging connections with Serbian politicians. In September 2015, OCCRP and KRIK published a series of videos from intelligence sources which showed him meeting with senior Serbian police officials in 2008 and 2009, including then-Minister of Police and future Prime Minister Ivica Dacic.

Trouble, however, soon found him again.

Radulović had opened a Credit Suisse account in January 2007 through an offshore company in the Marshall Islands, Manmare Holdings, that had itself been created just a month earlier.

This account was worth 3.4 million Swiss francs (roughly $3.2 million) as of December 2008, according to the Suisse Secrets data.

By that point, Radulović was involved not just in financial fraud, prosecutors say, but in smuggling cocaine from South America to Europe.

According to a prosecutor’s report, Radulović also used his new Credit Suisse account to help Šarić clean some 3,386,000 euros’ worth of drug money. Official documents indicate police stumbled upon the account when, in August 2011, they searched the home of a person connected to Radulović’s group and found stray banking documents.

Follow the Money to Switzerland
Prosecutors say the plan to launder drug money via one of Radulović’s Credit Suisse accounts unfolded like this:On January 15, 2009, Radulović took 2,580,000 euros in cash from Šarić and lodged it into his own bank account in Belgrade. The next day, Radulović transferred the same amount to his account at Credit Suisse in Zurich. The cover story for this transfer, prosecutors say, was that the money was used for “buying a ship.”Radulović allegedly laundered another 806,056 euros through the Credit Suisse account using a different ruse.Again taking cash from Šarić, he then found businessmen “whose companies had money abroad but needed cash in Serbia,” according to prosecutors. Radulović gave the men cash and in return, their companies transferred the equivalent to his Manmare Holdings account at Credit Suisse.The money was paid in six transactions between December 2008 and April 2009, and the transfers were similarly listed as “shipping services, buying ship etc.” On July 10, 2009, this money was then converted from Swiss francs to U.S. dollars, and wired to his personal account at Hypo bank in Belgrade.

Meanwhile he came to the attention of European law enforcement. The British Serious Organized Crime Agency, believed Radulović was a leader of a Balkan smuggling cartel, alongside Šarić, according to Argentine criminal investigative files obtained by OCCRP. The group was suspected of smuggling tons of cocaine from South America to Europe and cleaning millions in drug profits.

Radulović’s role, according to prosecutors, was as the owner of ships that moved drugs across the Atlantic. Drug money was allegedly disguised as transfers related to shipping.

In late 2008 and early 2009, the cartel allegedly hid 1.8 tons of cocaine among soybeans loaded on a ship owned by Radulović, and sent it from Argentina to Europe. Police planned to seize the drugs in Greece but when the gang was tipped off by corrupt police, they unloaded the drugs onto a fishing vessel near the Spanish coast.

Although prosecutors were aware of one of Radulović’s Credit Suisse accounts, a second, previously unknown account also appears in the Suisse Secrets data. The account held less money than the other one, but offers significant clues to Radulović’s business affairs.

While studying the Paradise Papers, a trove of records from the offshore industry obtained by the International Consortium of Investigative Journalism, journalists in 2017 uncovered the private emails of Radulović’s son, Djordje. The emails showed that the father and son had set up a company in the Marshall Islands called Radfine to salvage the wreckage of the bankrupt Ramoil and protect its assets.

“Ramoil Holding was incorporated by my father … but was taken off the registrar in 1999,” the emails from Djordje read. “Certain assets which were acquired at the time under Ramoil Holding were recently discovered to still be in existence under its name. Now it is our intention to reclaim those assets but not under Ramoil Holding but under the company Radfine Holding. …”

Djordje told the company formation agents he dealt with that he wanted to “draft up something like an asset purchase agreement between Ramoil and Radfine which would enable Radfine to claim the mentioned assets.”

It remains unclear what happened to the Ramoil assets, but Credit Suisse was apparently facilitating Radulović’s banking while he went about his salvage operation. The Suisse Secrets data shows that an account listing Radfine Holding, Radulović and Djordje as co-beneficiaries was opened a few weeks before Radfine was created. The account held some 165,000 Swiss francs (about $134,000) as of June 2006. Serbian organized crime prosecutors told OCCRP and KRIK that this second Credit Suisse account had never before been on their radar.
Retrial on the Run
Despite the high-level connections he had made in Serbia upon leaving the U.S., Radulović was indicted by Serbian authorities over the seafaring cocaine plot in 2012. Sentenced in absentia to 10 years in prison in 2020, he later saw that verdict overturned and now faces a retrial.

Having surrendered in 2014, Šarić, who headed a gang that smuggled nearly six tons of cocaine from South America to Europe, was sentenced to 15 years. He too, however, is facing a retrial after his drugs charges were also overturned. He remains under house arrest in Belgrade.

Why Credit Suisse kept Radulović as a client, well after the SEC had begun investigating him and he had left the U.S. under a dark cloud, remains a mystery.

The bank declined to respond to questions from journalists about specific accounts or customers, but said in a statement that it took risk management and anti-money laundering compliance seriously.

“As a leading global financial institution, Credit Suisse is deeply aware of its responsibility to clients, and the financial system as a whole to ensure that the highest standards of conduct are upheld,” it said.

Though Serbian authorities had asked their Swiss counterparts for information from Credit Suisse in 2011, nothing concrete was forthcoming until 2013. By then it was too late: both of Radulović’s accounts had been closed in mid-2010, and the money was apparently gone.

Serbian prosecutors managed to track part of Radulović’s nest egg to Belgrade, where they seized some of his ill-gotten assets in 2012. In court, Radulović’s lawyer claimed that money his client had in his bank account in Switzerland was from a business deal, not cocaine smuggling.

A judge didn’t buy the story, and Radulović’s assets were frozen.

Radulović, of course, was not around to explain himself to the judge in person. He’s still on the run.