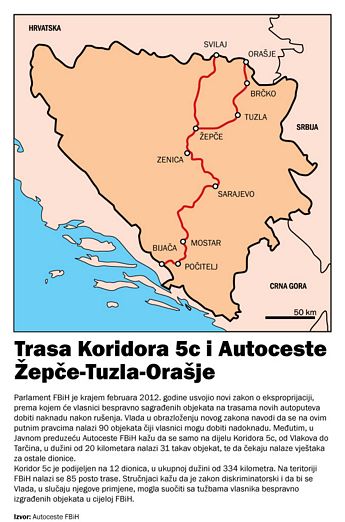 Experts say a new law on expropriation is unfair to citizens of the Federation of Bosnia and Herzegovina (FBiH) and could open the government budget to big losses from lawsuits.

The law which the FBiH Parliament’s House of Representatives passed last month allows the owners of illegally built buildings along Corridor 5C and the highways of Tuzla-Brčko-Orašje and Tuzla-Žepče, to seek remuneration if their buildings are knocked down.

The law also said that this right will be granted to home owners who have reported the address along one of these routes as their official residence.

The FBiH government’s rationale is that many refugees and displaced persons have built buildings along this line during and after the war. The government also reiterated how there was no efficient response from the authorities at the time which is why they made an exception and decided to remunerate those persons.

Goran Brkić, the deputy director of the Federal Administration for Geodetic and Real Property Affairs, who took part in developing the technical side of the law told the Center for Investigative Reporting in Sarajevo (CIN), that the government tried addressing this problem so that it could proceed with the highway construction.

However, he said that the resulting law has been criticized because owners of other illegally built buildings across the FBiH can complain that they have been discriminated against.

Director of the Public Corporation of FBiH Highways Ensad Karić, proposed payment in order to speed up construction. The corporation has taken out loans from the European Bank for Reconstruction and Development and for the European Investment Bank totaling € 255 million. Karić said that at the time of signing the loan contracts, the government pledged to pay remuneration to home owners whose houses were slated for demolition, even though no law allowed for the remuneration at the time.

“We lost four years because everyone said that it could not be done,” said Karić. He added that he was shocked when he realized that loan proceeds have gone unused since 2008. However, experts do not support this way of solving problems. Adil Lozo, a lawyer specializing in property law and a Member of FBiH Parliament, voted against the ideal.

He said every citizen who sued could win and the state budget would suffer if the law gets off the ground. Besim Mehmedić, a member of the Sarajevo Cantonal Assembly and the former FBiH Minister of Traffic and Communication, told CIN that the law was counter-productive because it helped one group of citizens, not the whole population.

The current Minister Enver Bijedić was not available for comment.

The law awaits signature by the FBiH Parliament speaker Denis Zvizdić and publication in the Official Gazette to be entered into force.