In 2014, the Land Registry Office of the Travnik Municipal Court deeded the land near Busovača to “VRADIS Investicija”, a Sarajevo company that closed down a long time ago, thus legalizing the long-hidden fictitious trade from 2008 with stockbroker Zijad Blekić.

CIN reporters found that a court official handling the case failed to check whether “VRADIS Investments” still existed. She also accepted the transfer application filed by Blekić’s associate, Edin Dizdar, although he presented no power of attorney to the Court, which is contrary to the Law on Land Registry of the Federation of Bosnia and Herzegovina (FBiH). Although the application arrived six years after the sale, it was decided the same day, which is not a common practice of this court department.

The head of the Land Registry Office, Maja Spahić, believes that her predecessor – who passed away in the meantime – made no defaults that would call into question the legality of the ownership transfer decision. At the same time, the prosecution claims the transfer had been carried out improperly and that Dizdar had an insider’s assistance in registering this property.

“VRADIS Investicije” was founded by Blekić’s and Dizdar’s close associates a few months before they bought Blekić’s land for BAM 1.1 million – four times the price the appraisal experts established subsequently.

The company received the money as a sales brokering fee for facilitating the purchase of land for the building of the Slovenian NLB Group in Sarajevo. The project was worth about BAM 33 million, and most of the money was paid to the landowner, the company “Unioninvest – izgradnja objekata”. However, this business plan has not been implemented, but instead, it caught the attention of the police and prosecutors. The investigation showed that company VRADIS Investicije played no intermediary role in the project, hence Blekić and a group of private businessmen and their families were accused of laundering millions.

The details of the transfer in question were partially described in the indictment the Sarajevo Canton Prosecutor’s Office filed against 19 people for embezzling a BAM 33 million loan from NLB Bank.

At the trial, which began in late October, the prosecution will try to prove that most of the money intended for the construction of the bank’s business center at Marijin Dvor in Sarajevo has been transferred to the accounts of companies controlled by the accused and ended up in their private accounts thanks to fictitious contracts.

One such contract was the contract VRADIS Investicije signed with Zijad Blekić for the purchase of land in Busovača. Blekić and Nermin Brkić, an employee of Blekić’s company Eurohaus have been purchasing plots in that area since 2007. For a short while, the land was used for potato growing and bull breeding.  Instead of business success, the land has become a ‘laundromat” of the big project in Sarajevo.

In 2008, the Slovenian NLB bank was looking to buy an attractive piece of land in Marijin Dvor for its center. The company Unioninvest – izgradnja objekata offered the land, and the bank accepted.

However, instead of buying directly, the bank entered a business cooperation agreement with Profin-Invest from Sarajevo, as a project holder, and several other companies that were given different roles in the implementation of the Marijin Dvor project. One of the founders of Profin-Invest, Armin Mulahusić, was the director of the Fund in which Zijad Blekić is the major shareholder.

The Slovenians granted the Profin-Invest a loan of BAM 33 million to purchase the land from Unioninvest-izgradnja objekata, make a design and obtain relevant permits for the construction of the center.

However, the center was never built, and most of the money was diverted – contrary to the agreement – into the fictitious business of various private companies controlled or owned by Blekić and others, says the indictment.

According to the prosecution, this company was never a sales broker nor did they enter a contract that would justify the millions BAM fee charged.

Company VRADIS Investicije was founded by Muharem Bajrić, Blekić’s next-door neighbor and a driver in his company Eurohouse. The Director of the company is Ramiz Bibić, an employee of the same brokering company. The witnesses interviewed during the investigation claimed the company was in fact run by Blekić and Edin Dizdar, a man who appeared in the Travnik court in 2014 seeking that the Blekić’s land be deeded to the non-existent company VRADIS Investicije.

Ten days after collecting BAM 1.1 million for sales brokering, this company transferred the whole amount to the private account of Zijad Blekić, the money which was used to purchase 13.4 thousand square meters of land in Busovača. During the 2020 investigation, experts determined that the land was worth four times less. Co-owners of the land, Zijad Blekić, and Nermin Brkić signed a contract with Bibić, the director of VRADIS Investicije.

Brkić later testified that Blekić was in debt and that he had approached him on one occasion, outlining a plan on how to resolve them. He asked Brkić to donate him the ownership over his part of the land, promising to return it to him after a year. Brkić claims his wife and he were summoned by the Sarajevo notary Miloš P. Jovović to sign a contract because the land was part of the marital property. He says he went to the notary convinced that he would be signing a gift contract:

“The notary put some papers in front of us to sign and hurried us to sign it… neither my wife nor I looked at what we were signing.”

Brkić claim to have received the contract later, by mail, but instead of the promised gift contract, in the envelope, he found a sales contract.

However, despite the unusual circumstances he described, Brkić never brought legal action to regain his share of land ownership in Busovača.

Brkić told investigators that Blekić has been assuring him that the land would remain in their possession because VRADIS Investicije was his company and he kept that promise for six years.

After the sale, Zijad Blekić continued to dispose of his part of the land, where he built a summer house he used to organize gatherings with owners of private companies, representatives of banks, and institutions from Sarajevo. Two years later, he donated his share to his daughter Azra, who soon returned the property to him.

Blekić did not want to talk to CIN reporters.

These contracts were also concluded with the same notary, Jovović, and the land was deeded at the Travnik Court. The notary claims not to remember the details as this was a long time ago.

The new fictitious owner of the land, the company VRADIS Investicije, was closed down in 2010 and merged with the company Unioninvest – izgradnja objekata, the director of which is Edin Dizdar. According to lawyer Asim Crnalić, although Dizdar managed the company, he did not know for years that the land ownership was not deeded to the company.

While the property was recorded in the company’s business documentation, the court records said that it belonged to Blekić and Brkić, which is contrary to international accounting standards.

When he learned this in 2013, he asked Blekić what it was all this about. “Blekić gave some explanation. He told him that it had been paid for and that it should be registered with Unioninvest because the merger had already been completed”, explains lawyer Crnalić on behalf of Edin Dizdar, who is held in custody.

Thus, in the summer of 2014, four years after the closure of VRADIS Investicije and six years after the purchase of Blekić’s and Brkić’s land, Dizdar filed a registration application with the Court in Travnik to register the non-existent company with which he had no formal ties as owner. He enclosed a copy of the 2008 purchase agreement.

Having inspected the court documents, CIN reporters found that he had enclosed a six-year-old excerpt from the court register for VRADIS Investicije. According to this document, the director was Ramiz Bibić, while at that time Dizdar did not have any function in the company. According to the FBiH Land Registry Law, a court clerk shall reject an application if submitted by an unauthorized person.

Despite a series of faults in the process, the head of the Land Registry Office, Maja Spahić, says that the transfer registration is legal, but that in this situation, she would have done it differently, and she would have asked for a fresh excerpt from the company register as well as an annex to the purchase agreement.

Lawyer Crnalić claims that following the recommendation of the then employee of the Land Registry Office, his client made an annex to the contract and sent it to the tax administration with the question of whether he is required to pay an additional tax.  Having never received any response, he embarked on the process with the old contract.

The annex to the contract is still not in the court documents in Travnik, but CIN reporters found that the decision registering the new owner was made on the very same day the application was filed.

According to Spahić, such urgency in resolving applications for transfer registration is not at all common in the Land Registry Office. 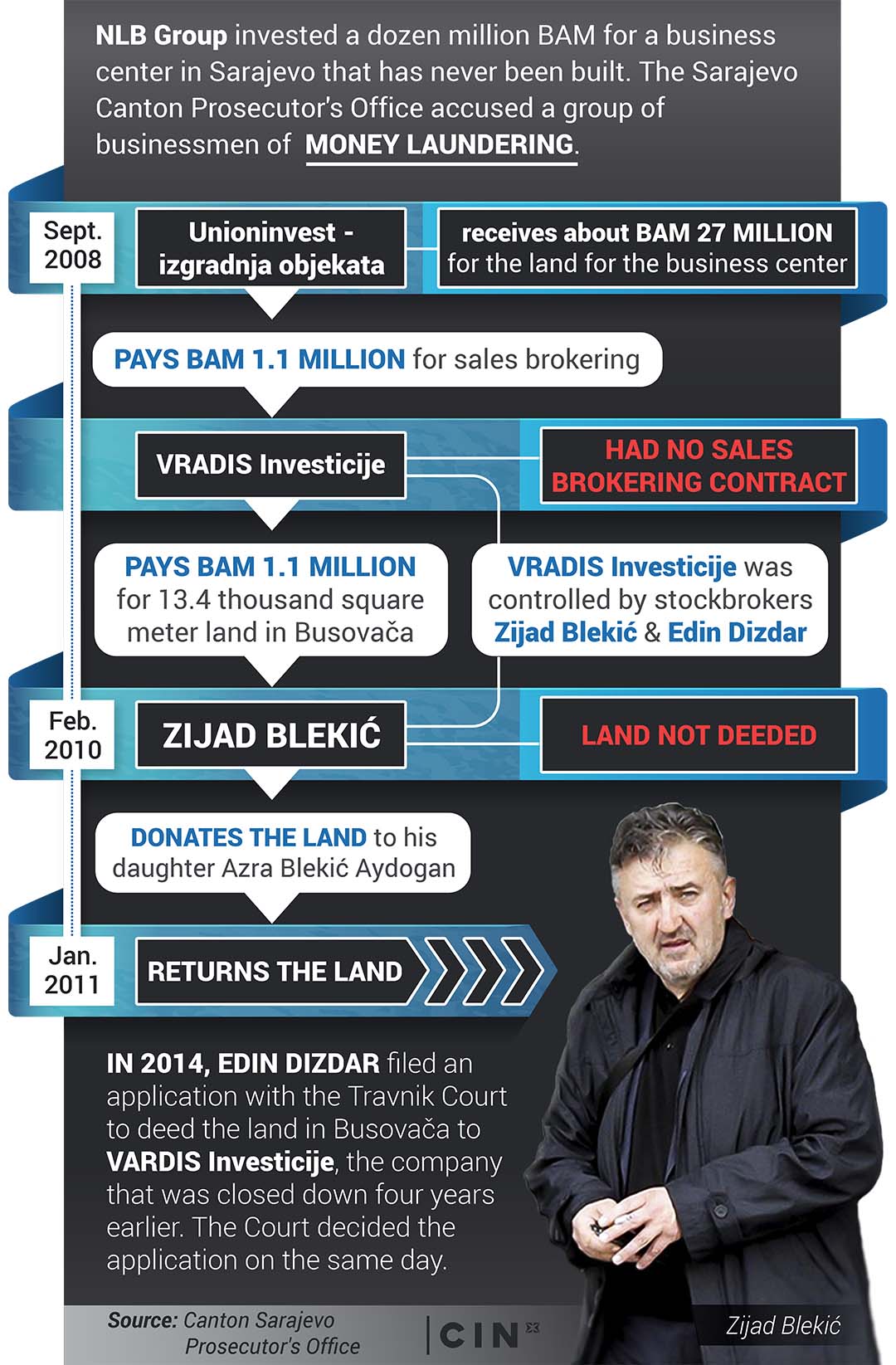