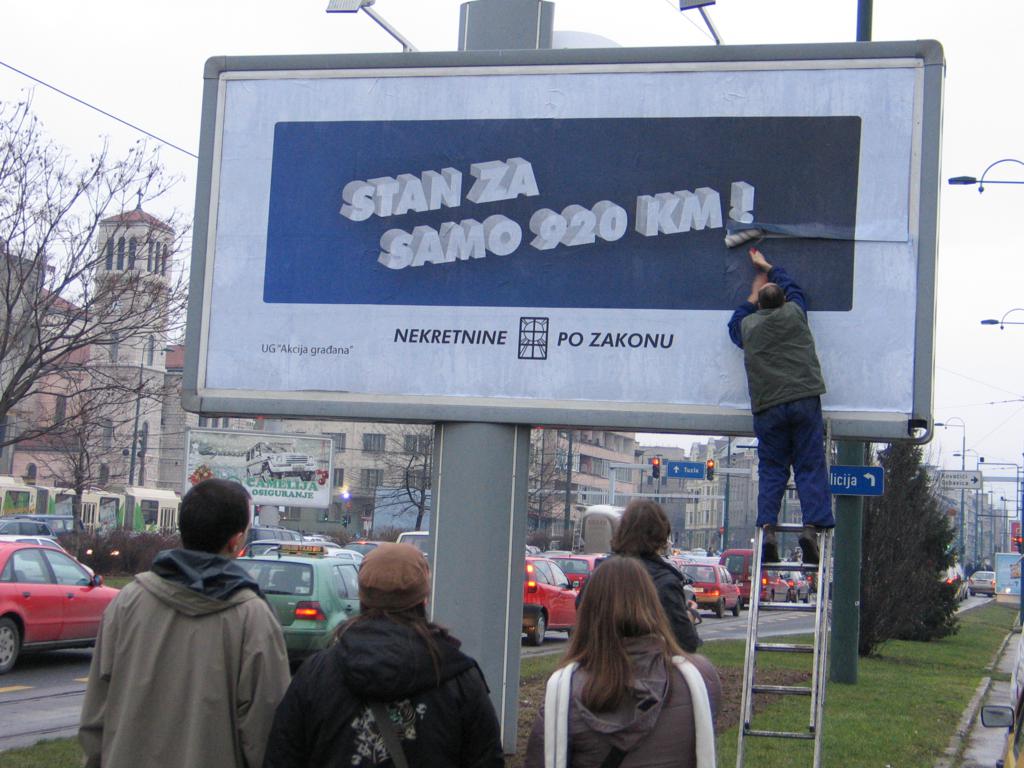 The graffiti was erased and the prime minister said he and his family were concerned and demanded quick action from police.

Behind the graffiti was a story by reporters from the Center for Investigative Reporting in Sarajevo (CIN) from September 2007 that found that the prime minister bought his apartment—which had a market price at the time of 500,000KM, for 900KM, paid with privatization vouchers.

Since the prime minister made his public demand for quick police action, members of an informal group called ‘Citizens’ Action’ have sent 4,000 emails to the police, each claiming to be the author of the graffiti.

And they didn’t stop there. One of them, Darko Brkan, said yesterday that Branković’s reaction to the graffiti angered them and inspired them to put out another message. This time it was on billboards in several sites, two in Sarajevo and others in other Bosnian cities. The billboards went up on January 24 in Sarajevo and featured an advertisement for a 132-square-meter apartment in downtown for only 920 KM.

‘In the beginning we wanted to put the posters close to the prime minister’s apartment, but then we decided to place them where they would be visible for all to see’ said Brkan.

Brkan said the group thought that all citizens have the right to know about the prime minister’s acquisition of the apartment and that this was a way to send him a message that he didn’t deserve to be at the head of the government.

Just like the graffiti, the billboards in Sarajevo didn’t last long. The first was removed on January 29 and the second on January 30.

The reason given by a cantonal authority was that the posters were located in places that were not reserved for billboards, and that a decision was made in July to remove illegally displayed posters.

The activists condemned the action and said the decision quoted was made in 2003 and only now enforced. ‘A decision to remove illegal billboards dates back to 2003 and the timing of the action of the authorities shows an agenda’ said Brkan.

Adem Zolj, director of the Sarajevo Bureau of Roads, dismissed that speculation and said that the removal of the billboards was pure coincidence. He said he had had no idea the posters were there.

He said that the owners of the companies that maintain the billboards were informed in a timely manner about the illegally displayed posters but failed to remove them, and that was why the authorities stepped in.

‘Poor Branković has nothing to do with it’ said Zolj.