Business across the Border

BiH Border Police haven’t had much success in uncovering drugs. They blame this on their lack of equipment and a lack of cooperation among other law enforcement agencies. 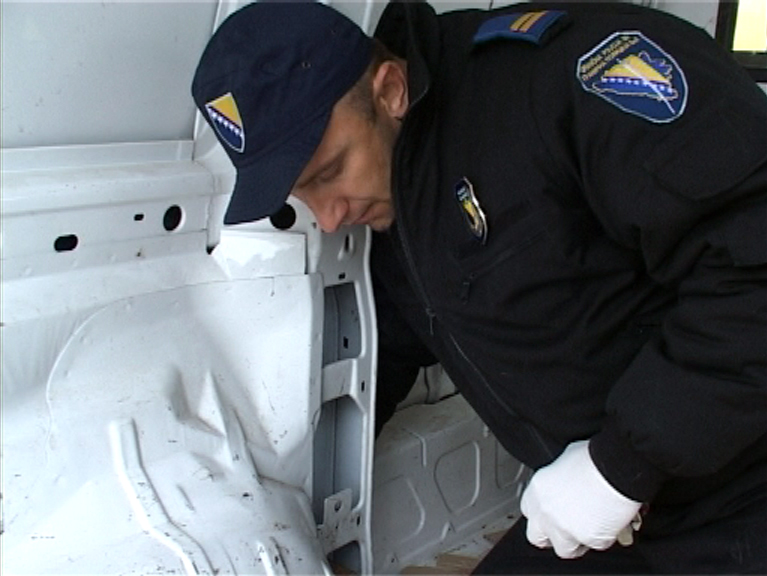 A random glance through the white Golf window made customs officer Velibor Vučković suspicious that driver Mirsad Plojović from Novi Pazar was lying about having nothing to declare.

A lump under the rubber mat behind the driver seat got the officer thinking that Plojović and passenger Besim Bajramović crossing over the Pavlović Bridge near Bijeljina into Bosnia and Herzegovina (BiH) were smuggling. Indeed, the lump turned out to be grocery bags filled with more than 27 kilograms of heroin, the largest amount of drugs Vučković had discovered in his 10-year career and the lone instance in 2005 that heroin was found being smuggled into the country.

Exposure of the illicit trade in narcotics coming into BiH is by and large haphazard, the result more of luck than any concerted effort by BiH Border Police and other law enforcement agencies. Porous borders combined with understaffed, underequipped agencies that compete rather than cooperate mean that drug smugglers can mostly move as they please across the borders of the Balkans.

Vučković told the Center for Investigative Reporting in Sarajevo (CIN) that the Golf could easily have slipped through without any search. As it happened, on that day in April 2005 the nearby border crossing of Sremska Rača was closed and backed-up traffic had been redirected to his location on the bridge. A line of trucks waited to be checked and the two passengers in the Golf did not look like obvious criminals. He admits that is not a reliable way to determine which vehicles to search for drugs, but you can’t open and check every vehicle and keep border traffic moving, he said.

Plojović ended up with a seven year prison sentence, but the court took Barjamović’s word that he was an unsuspecting traveler and released him. Vučković was not rewarded by his superiors. He said he preferred it that way. ‘Better alive and anonymous than dead and famous’ Vučković said. It does make him uneasy when he spots a criminal at a border.

Officers dread reprisals from the criminals they catch with drugs. Some customs officers joke that whoever finds drugs should call it flour.

Enes Gačanin, head of the Central Investigation Office of the BiH Border Police, is bothered by such jokes. He realizes they are the products of bad experiences. But such people perhaps are unfit for border work. ‘He should go home and receive his paycheck by mail’ said Gačanin.

Information from the BiH Ministry of Security and BiH Border Police shows that over the past three years a total of 27.2 kilograms of heroin, 163 kilograms of marijuana, 9.5 kilograms of cocaine and some synthetic drugs including ecstasy were seized on the country’s borders. Izačič, Kamensko, Rača, Hum and Arađelovo are some of the crossings at which individuals most often have tried smuggling in drugs.

The single lucky catch at the Pavlović Bridge accounted for nearly all of the heroin seized. By comparison, Serbian border police in 2007 alone found nearly 87 kilograms of heroin and more than 62 kilograms of cocaine.

‘All other drugs… let’s say heroin… everything that absolutely can’t be produced in BiH and everything that was seized, it clearly got across the state border’ said Nermin Lagumdžija, head of the Narcotics Department of the FBiH Ministry of Interior (MUP).

Gačanin offers as an excuse that information should come from other law enforcement agencies if border agencies are to perform the most efficiently. He said no country in the world has completely secured borders. ‘If we were to initiate absolute checks, we would grind everything to a halt’ he said.

His colleague from Croatia, Josip Miličević, head of the Border Protection Department of the Croatian MUP, agrees. He said that a modern border service doesn’t perform a detailed check up but collaborates with other police agencies that inform them when to expect drugs at the border. He said that rangers in Croatia share one computer network with other police agencies to increase efficiency. BiH has yet to reach that level of competency and collaboration.

Lazo Jovanović, inspector at the BiH Border Police field office in Bijeljina, said police agencies don’t cooperate out of jealousy. Each one wants a scoop for itself, so they don’t share intelligence. Typically, he said, border police hear information only after the suspect has been caught inside the country.

Gojko Vasić, head of the Crime Police of the RS MUP, said warnings are sometimes intentionally not passed to the border police because agencies believe there is a better chance of seizing goods inside the country. And his FBiH counterpart Lagumdžija said police are currently under no obligation to share information by any law or mutual agreements.

In contrast, Miličević said that Croatian ministers have signed an agreement on exchange of information to better insure collaboration.

Lack of trust cannot be fixed with any agreement, however. EUPM officials note that there have been times when information about upcoming actions was leaked by police structures, including border police, and raids failed. This does not encourage openness.

Donley said he has no real evidence of this, but speculates that it’s true. Personnel from secretaries copying papers for the prosecutor to police officials have access to information and could be leaking it. ‘I can see in the media that there is much information that has leaked and it should not have. And that’s a shame’ he said. This may be one of the biggest reasons why international police agencies do not share intelligence with BiH.

In sharp contrast to the police, criminals do work together. Those of varying nationalities and different generations have no difficulty cooperating for illegal gains.

Police also admit that their criminal adversaries are increasingly skillful. They monitor police on the border and devise new ways to smuggle. If caught, they take all the blame, sparing their accomplices who continue in the trade.

‘If it is easy to discover, it wouldn’t be lucrative’ said inspector Jovanović.

Another advantage for criminal groups is the immensity of the BiH border. Along 1,551 kilometers are 89 border crossing and more than 400 locations suitable for illegal crossing over fields or water.

Along the River Sava and in Posavina land is still mined from the 1990s wars, said Jovanović. Smugglers sometimes put up minefield signs. ‘Now you go ahead, risk and send an officer there.’

Experts say the most critical points for importing drugs are down south towards Montenegro and Albania and in the section that separates Herzegovina and Croatia. ‘We had a bust two or three days ago in the city area [Sarajevo]… two kilograms of cannabis. Allegedly, it came from Montenegro’ Lagumdžija said.

Ramiz Hasić, head of the Special Department of the Herzegovina-Neretva Canton MUP, said drugs come in to Mostar mostly from Sarajevo, but also from Croatia in small quantities. He had no specifics on how much. It may come in through the official border crossing point at Doljani, he said. Drugs well packed and put into large trucks would be hard to find.

Džemal Murga, inspector at the Narcotics Department of the KS MUP said there are drugs on the market that smell like fuel. ‘Obviously, it was imported in various tanks, where it gets some of that diesel odor’ he said.

The BiH Border Police lack special gear that would enable more detailed inspections of vehicles. They use police dogs, which are of limited use, while only infrequently using night goggles, mirrors that help detect false compartments under or inside vehicles and density measuring equipment that can reveal where vehicles outfitted for smuggling have been double-plated with metal.

Last June the U.S. Embassy donated $156,000 worth of such equipment to BiH Border Police. The field office in Bijeljina got some of it, but hasn’t used it. They can’t figure out how it works, inspector Jovanović said.

The instruction manuals and writing on the equipment are all in English. He said they were waiting for a translation from the EUPM.

CIN asked Donley about that translation. He said it was the first he’d heard about any translation being needed.