Some commissions at the cantonal level were not created according to bylaws made by the cantons themselves. Despite years of auditors’ warnings, large sums went into commission work and the money ended up with selected people. 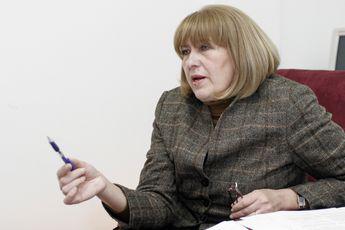 By The Center for Investigative Reporting

Cantons for years spent hundreds of thousands of KM annually financing commissions while ignoring laws designed to keep members from sitting on multiple boards and racking up big fees.

Those are the conclusions of a review of information that the Center for Investigative Reporting in Sarajevo (CIN) recently collected, including reports filed by the Auditor’s Office of the Federation of Bosnia and Herzegovina (FBiH).

Records and interviews with cantonal and FBiH leaders show that individual commissioners made several thousand KM each year on top of their regular salaries despite rules that were supposed to limit pay.

Auditors who had continuously complained about the commission system said their warnings went unheeded for a long time.

‘You see, they are making up commissions’ said Mirsada Janjoš, director of the Department for the Auditing of the Cantons’ Budgets and Agencies within the FBiH auditor’s office.

Officials, audits complain, created commissions that got paid to finish work that was just part of the regular jobs of government workers. The commissioners, often the government employees paid to do the work in the first place, got extra for the same work.

Then, what started out as a task for a one-time commission was stretched to cover months, she said and sometimes it turned into a permanent fixture.

Janjoš said commission fees were frequently paid without accounting and without justification.

‘There are no reports that could really show when, over what time, and how much they have worked, and whether they have truly earned the remuneration’ she said. 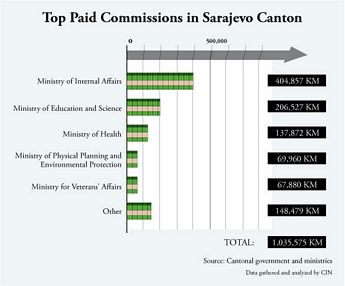 Some governments don’t have complete data about the commissions they are paying. According to Tarik Humačkić, secretary of government of the Sarajevo Canton, there has never been a complete record of commission work there, which made it difficult to comply fully with CIN’s request for data.

Taking into account the auditors’ reports and different levels of bureaucracy in the cantons, CIN reporters focused on three cantons: Tuzla, Herzegovina-Neretva (Mostar) and Sarajevo.

Only Sarajevo and Tuzla provided enough information to fully analyze, and Tuzla had information for only one year. Most Herzegovina-Neretva ministries failed to supply the bulk of the information requested for more than six months, which is in violation of the country’s Freedom of Information Law.

According to available records, Sarajevo Canton allocated almost 3.2 KM for commission work between 2006 and 2008. That probably means the actual figures are higher, because some ministries sent data about their commissions before the end of that year and before reporting was complete. Also, it is impossible to determine exact pay for more than 120 commissioners from the Ministry of Interior of Sarajevo Canton.

It was also impossible to establish the full amount spent on commissions throughout the cantons because of the different ways payments are budgeted. Sometimes the figure is logged as a fee paid in an independent contractor’s agreement, sometimes as a freelance contract, or sometimes as fees or contracts for work done on a temporary or occasional basis.

Janjoš said that she does not exclude the possibility that this is done to mask the real amount of pay going to commissioners.

Some cantons, faced with enormous commission expenditures they could not support, have limited payments. 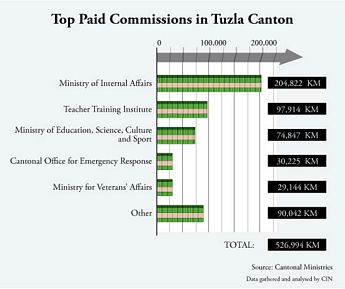 In 2003, the Tuzla, cantonal government decided that one person could not sit on more than two commissions and it set maximum commission payments at 200 KM for a president, 150 KM for a member and 100 KM for a secretary.

Under those restrictions, 4,800 KM represents the maximum anyone would have been entitled to in a single year for commission work—possible for someone presiding over two commissions. But some commission members in 2007 got more than 5,000 KM and some people sat on as many as 10 commissions.

At least one transgression wound up in court.

An indictment on charges of the abuse of office and authority the Cantonal Prosecutor’s Office filed against Sead Omerbegović, the minister of Internal Affairs of Tuzla Canton in January reveals other commission-related irregularities.

Omerbegović was accused of appointing 13 civilians to the commissions for drivers’ testing panels between June 18, 2004, and Aug. 31, 2007, and those commissioners collected 25,642 KM. The indictment claims that these appointments violated a decision Omerbegović issued himself that only officials and employees of the ministry of internal affairs could sit on the panels. 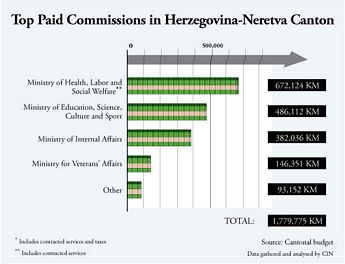 The costs of commissions continued to spiral, until governments earlier this year took corrective steps.

‘We have definitely passed a decision to stop paying for commissions except for the expert ones, for those people whom we are contracting with from the outside’ said Sead Bećirović, Tuzla’s finance minister.

‘There is resistance’ Bećirović said, ‘but I think that it’s high time for everyone to start doing their job, without creating additional commissions to collect a fee.’

Sarajevo Canton rules on setting up commissions also were ignored.

Among other things, officials were sitting on more than two commissions at the same time. And these commissions were created to finish work that is part of the regular duties of government employees and they did commission work during their working hours.

According to Humačkić, such data convinced officials that cuts were needed and in February they acted.

Commission members are now supposed to be paid extra only for work done outside office hours and commissions are no longer to be set up to do regular government employee work. For example, according to Humačkić, public procurement commissions are not paid, because the canton’s Joint Expert Services is supposed to do that work.

In Mostar, the cantonal government has cut commission fees by 30 percent and eliminated pay for commissions formed to do the regular work of government employees. Officials, however, resisted reporting just how much they have paid individuals in the past.