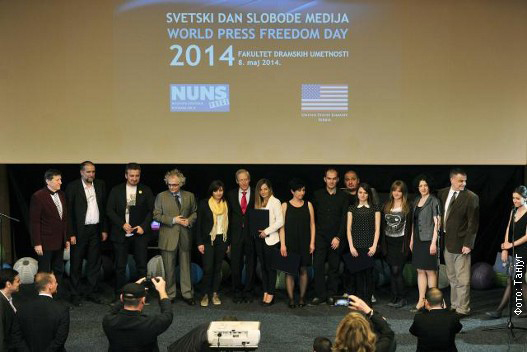 The award was established by the Independent Journalists’ Association of Serbia and the U.S. Embassy in Belgrade in honor of the World Press Freedom Day.

The reporters that the institutions, private firms and individuals were paying thousands of euros for the awards they have been receiving from Oxford-based European Business Assembly (EBA) for years.

Some of the recepients  of this fake recognition were The Clinical Center of the Sarajevo University and its then Director General Faris Gavrankapetanović and several private Universities in Bosnia and Herzegovina. In Serbia, the City of Belgrade and its then Mayor Dragan Đilas paid for the award.

The award for the best story published in broadcasting media went to Vesna Radojević and Anđela Milivojević from TV Mreža and the Center for Investigative Reporting in Serbia (CINS) for a video story about thousands of defrauded citizens who are still waiting to move into their apartments in the Film City in Belgrade.

The recipients in the category of print media were Aleksandar Đorđević and Slobodan Georgijev from BIRN Serbia for a story about the changes on the marketing market after 2012.

The U.S. ambassador to Serbia Michael Kirby said during the award ceremony that journalists should be independent and curious “in order to stir up the waters”.

NUNS’s president Vukašin Obradović said that all entries deserved to receive an award based on the courage and skill of the journalists who were ready to take on the biggest issues in the society and that investigative reporting was a good test of its democracy.

Thirty-nine reporters submitted over 50 stories and videos. The jury made up of Saša Leković, reporter and media consultant, Branko Čečen, director of the Center for Investigative Reporting in Serbia, Ivan Angelovski of the INSIDER production and the investigative reporter and editor-in-chief of Novi Magazine Milorad Ivanović have chosen the winners.