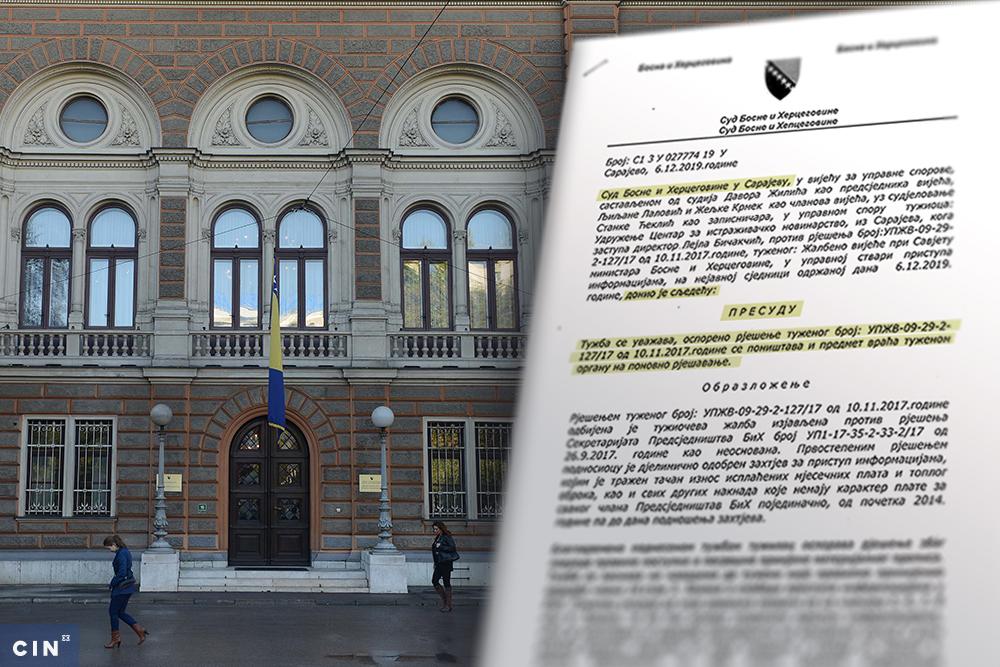 The Court of Bosnia and Herzegovina ruled in favor of the Center for Investigative Reporting in Sarajevo (CIN) in a judicial review case against the Appellation Committee under the Council of Ministers. CIN filed a public-records request to obtain earnings of the members of the Bosnia and Herzegovina (BiH) Presidency which the Committee unlawfully threw out according to the Court’s ruling. The Court voided the administrative decision and sent back the request to the Committee for a fresh consideration.

The Court reasoned that the Committee did not give a clear explanation and provided sufficient grounds in the course of its administrative review for refusing to grant CIN access to these records.

“Everything against the above mentioned (opinion) represents arbitrary and illegitimate application of law,” stated the ruling.

In September 2017, CIN filed a public-records request for salaries, benefits and allowances of all members of the BiH Presidency from 2014 onwards. The BiH Presidency’s Secretariat refused to comply with the request stating that these disclosures could harm officeholders. CIN complained to the Appellation Committee which turned it down without a clear explanation.

CIN next filed a court case in which it stated that the requested information was of public interest and that a government agency could not just quote the articles of the law, but needed to explain the rationale behind them. The Court agreed with this line of reasoning.

“Citing legal basis for a decision is not sufficient to make it lawful,” wrote the panel of judges.

Since this government budget line is also filled through taxpayer contribution, the Court stated that the Secretariat and the Appellation Committee failed to take into account the importance of educating the public about the inner workings of a public body and how it used funds at its disposal. The Court stated that it could not address these issues in its ruling because the Committee did not conduct a public interest test.

The panel of judges has nevertheless made a point by saying that base salaries of government employees should be made public, but that individual earnings might be excluded from disclosure in order to protect their personal information.

“The protection of personal information, as a part of protection of privacy is not a right that outweighs other rights, but exactly the opposite – it’s a body of rights that has the same importance and place just like any other right and may be limited with the same right of other persons,” according to the ruling.

This is tenth case that CIN won against public and government institutions for withholding public information. In the past, the Court of BiH ruled in CIN’s favor so that legislators’ earnings would be released; that agencies would turn over information about employees on freelance agreements or that the public would have access to records on employees.

Ruling in CIN’s Favor
Judge ruled in favor of CIN

Every year, by citing state and entity laws on freedom of access to information, CIN reporters collect government records they use to uncover misuses of public funds. Based on journalists’ work, the authorities initiate numerous investigations and file indictments. Reporters’ work has also led to changes in the legislation.

Also, CIN is of the opinion that informing citizens about officeholders and judicial officials’ income and property holdings is in public interest and it does so regularly. On the other hand, government institutions are inconsistent in the practice of law and its application – while some disclose all requested records, the others search for ways to avoid this.