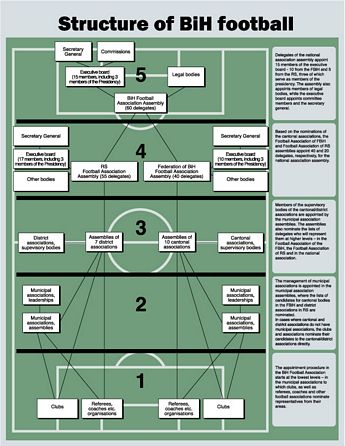 The leadership of the Bosnia and Herzegovina (BiH) Football Association has stayed in power for years thanks to the system that first put it there.

The way in which people are appointed at various levels of the association creates a framework that offers a select few multiple positions, broad support among people at different levels and a process that starts at such a local level that it makes change at the top almost impossible.

Entry into the association network is at the municipal, cantonal or district level. After these come the entity level and finally the state level at the top.

Clubs, even though some are vocal critics of the statewide association, have a role in naming the officials they later criticize.

According to Avdo Kalajdžić, until recently a coach of Mostar’s Velež, the crucial issue is that politics have tainted the sport. He said that people are chosen for many reasons, but not for their managerial qualities, and that oversight eventually damages the association’s ability to manage and administer a strong football program.

‘In general, football is ill, starting with the district to the cantonal to the entity to the state association’ says Kemal Alispahić, a coach of Jedinstvo in Bihać. ‘There are people in football who have no connection to football, but unfortunately, they are in some of the key posts.’

And they are there, say critics, at the expense of participation by former players—even legendary ones in BiH football—who rarely hold important positions.

Not everyone agrees on the importance of former players to the association. Hamdija ‘Tigar’ Abdić, a former war commander and now member of the executive board, the highest level of the association, said former players talk about the changes that Bosnian football needs, but do nothing about it. ‘What are you talking from Paris about? You, make yourself useful. As if someone cares that you were a football player’ said Abdić in a recent interview.

The Case against Meho Kodro

The indifference toward former football players was evident when the executive board sacked popular coach Meho Kodro after only four months at the head of the national team.

Kodro, who played for Barcelona’s famous ‘Barca’ club, and was a captain of the BiH national team, defied the association and refused to play a ‘friendly’ game against Iran that the association wanted for the money Iran was willing to pay to play the game. Kodro has said he considered the game a waste of training time for the upcoming World Cup qualifiers. The association, after agreeing with Iran to play, fired him for his refusal.

The firing stirred public outrage against the leadership and delegates held a special session of the general assembly. Delegates supported the executive board.

Iljo Dominković, the association’s president, said that the delegates’ support showed that the leadership had acted appropriately.

His position was echoed by the association’s Secretary General, Munib Ušanović. He said members of the board do not act as a statewide, separate group, but consult those at other levels.

Consulting other levels, in BiH football, can mean consulting oneself.

Mirsad Ibrišimbegović, a former referee and a football player, is an example of someone who occupied several posts at different levels.

Positions Run in the Family

Other members of the Ibrišmbegović family are involved in BiH football. His son Senad is a Premier League referee and owes his nomination and promotion to the board his father chaired.

Ibrišimbegović’s brother Mesud is more important to the family in BiH. He is a delegate to the BiH association, which allowed him to vote in support of his brother at the special session.

Ibrišimbegović is not the only man who collects posts in the ranks of BiH football.

Stevo Maksimović is an example of a man who began small and is now everywhere. He won his first position as a delegate from the Gnionica’s Vučjak club to the Modriča municipal association.

His next move was to be appointed by Modriča as delegate to the district football association in Doboj. He worked his way up to the executive board and its presidency.

The Doboj assembly appointed him to be delegate of the RS football association as well as the state association. He is also a member of the Referee Commission of BiH football.

Between these positions, Maksimović is involved in selecting people for leadership positions in the football association at all levels.

Maksimović says that he has no intention of leaving any of these posts as long as the statute allows it.

Voting for Each Other

Holding such multiple positions is not the only way that the network sustains itself in the face of criticism.

All voted their confidence in the state executive board, which has, as one of its members, Sulejman Čolaković, their colleague at the Zenica-Doboj Canton Association. Čolaković is a president and a member of the cantonal executive board.

Čolaković, Mujezinović and Ćurić, just like the majority of the members of the cantonal executive board, are also delegates in that association’s assembly.

The same goes for the Sarajevo Canton Football Association, where Mensud Bašić, otherwise a deputy president of the football club Sarajevo, holds seats on the association and the presidency, as well as on the executive board of the state association.

Čolaković said that under the old statute, members of the executive board were allowed to be delegates to the assembly as well.

The new statute does not allow this.

If multiple posts and the ability to swap votes aren’t confusing enough, there are more twists and turns in the structure of the association. The entity associations have mostly harmonized their statutes with those of the state, but not all cantons have taken that step.

The new statute mandates that the president of the association at the state level chairs the assembly but has no voting right. However, the statute in the Republika Srpska (RS) makes it possible for the members of the presidency to be delegates to the RS assembly with voting rights.

‘Regardless of the interpretations, it doesn’t make sense to us that someone is chairing a body without being a member’ says Rodoljub Petković, Secretary General of the RS football association.

Petković said many people hold several offices because there aren’t enough qualified football officials who could take over. ‘It is hard to find people with football credibility, experience, knowledge so that we could say – this one cannot be here if he can be there, etc.’

Čolaković says that the situation in BiH football is not as bad as it has been portrayed. ‘This is the most mature part of the tissue in BiH, in this complex country. It is the only part of (everyday) life which does not have any problems’ says Čolaković.

Ivica Barbarić disagrees, and says that the problem lies in the presence of people within the leadership of BiH football who don’t belong there.

‘They have created the system we have and the system suits them. It is very difficult to change it. I don’t see a healthy rank and file. It’s all some kind of sycophantism to satisfy some personal interests’ says Barbarić.

After a shorter version of the story ‘Connections Keep Officials in Power’ was published in Dnevni Avaz on December 23, 2008, Mr. Kemal Alispahić, coach of Bihać’s Jedinstvo club contacted the Center for Investigative Reporting (CIN) in Sarajevo.
Mr. Alispahić said two of his statements were taken out of context and that he can not stand by his comments: ‘In general, football is ill, starting with the district to the cantonal to the entity to the state association’ and ‘There are people in football who have no connection to football, but unfortunately, they are in some of the key posts.’
The full version of the story can be found on the CIN web site: www.cin.ba. CIN stands by the story as found on the website.