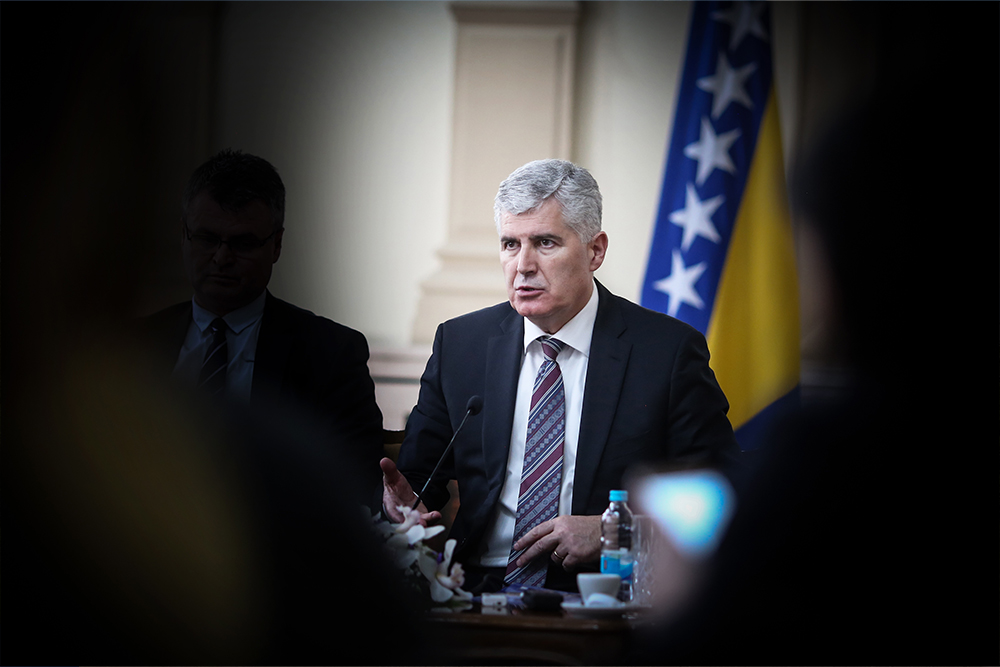 Blago Prskalo, the father-in-law of the president of the Croat Democratic Union of Bosnia and Herzegovina (HDZBiH) Dragan Čović, donated apartments in Zagreb and Makarska and land in Mostar to his daughters Bernadica Čović and Mirjana Perić.

Although with a miner’s pension, from 1998 to 2009, Prskalo managed to set aside 837 thousand marks for the purchase of these properties. However, in all these purchases he had intermediaries: the villa in Makarska and the land in Mostar were bought on his behalf by his daughter Bernadica, and the apartment in Zagreb by lawyer Božo Ćorić.

In 2015, the Center for Investigative Reporting (CIN) wrote about the Čović couple acquiring real estate directly, through purchase or gift until 2003. At the time, investigations were launched and lawsuits were filed against Čović on suspicion that he used public functions for personal gain, so Bernadica started buying real estate on behalf of relatives, who would later donate it to this couple.

In 2013, Prskalo donated 896 square meters of land in Mostar to Bernadica, which she bought five years earlier with his power of attorney for 50,000 BAM. On this plot of land, which they merged with another piece of land, the Čović couple has built an expensive villa in which they live today.

Bernadica helped her father to buy a three-story villa in Zaostrog on the Adriatic coast, Croatia, for about 625 thousand BAM in 2009. After a little over a year, Prskalo sold two apartments of 73 and 74 square meters on the first and second floor of this villa, with spacious terraces and two garages, for 586,500 BAM. The buyer of these apartments was Stanislav Mucić, owner of the design and construction company “MUCIC & CO” from Dugopolje, Croatia, and director of the company with the same name based in Ljubuški, BiH.

Mucić did not register his title deed immediately because the flooring of the villa was not yet completed. He did that only in October 2020. On the same day, Blago Prskalo donated a 104 sq.m. apartment on the ground and first floors of the villa to his daughter Bernadica.

Mucić donated his apartments to his wife Marija a month later.

Back in 1998, Blago Prskalo bought a three-room apartment in Zagreb for around 162,000 BAM. In an interview with CIN reporters, he did not want to explain the details of the purchase of a 71-square-meter property with a garage, which he calls a “small apartment”: “those willing to work can make fortune”, Prskalo said at the time.

In 2015, after CIN’s story about the property of the Čović couple, he donated the property to his second daughter, Mirjana Perić.

Around the time of the purchase of this property, Prskalo’s sons-in-law Dragan Perić and Dragan Čović worked closely together in the special operative industry. Čović was the director of “Sokol” from Mostar, the founding company of the “Soko Vit”, the company for the production and design of weapons and military equipment, where Dragan Perić, Mirjana’s husband was a director.

This company was the co-founder of “Hercegovačka banka” from Mostar, which the Croatian government used to transfer millions to help Croats in BiH. The Bank’s interim trustee  Toby Robinson said in a 2001 report that Soko Vit was one of the companies used to illegally extract money.

Profit made from leasing Sokol’s apartment

Shortly before leaving Sokol in 1998, Čović got to use a 100-square-meter company apartment in Mostar. A year and a half later, he bought it with his wife for 33,542 BAM worth of certificates. Eleven years later, he sold the apartment for 190,000 BAM to Matan Žarić, the current General Manager of Elektroprijenos BiH.

At the time of the sale, Čović and Žarić also met on the dock. As president and Board member of Hrvatske pošte i telekom (HPT), they were accused of transferring the company’s 4.7m BAM debt to the former Ministry of Defense of the Croat Defense Council (HVO) to three private companies from Mostar and Široki Brijeg. The companies later collected the debt in shares and thus became the majority owners of Eronet. The court later annulled the transaction, but the indictment against Čović, Žarić, and others was rejected for being late – the criminal prosecution had already become time-barred.

A month after Prskalo bought the property in Zagreb, Čović’s and Perić’s colleague Branko Kolobarić, the then president of the Sokol’s Board of Directors, bought the apartment in the same building. He paid 146,000 BAM for a two-room apartment with a garage.

Lawyer Božo Ćorić acted as a proxy in the purchase of apartments of both Prskalo and Kolobarić, and ten years later he formally registered the title deeds by bringing the documents to a notary for verification.

The FBiH Financial Police investigated Kolobarić and Dragan Čović, and in 2003 filed a criminal report against them, claiming that at the time of the purchase of these apartments Kolobarić and Čović signed harmful agreements for leasing Sokol property. The report was submitted to the Prosecutor’s Office of the Herzegovina-Neretva Canton (HNK), but no indictment was filed.

Real Estate of the Lawyer And Politicians

In 2005, the Law Firm of Bernadica Čović was authorized to buy land in Mostar on behalf of her aunt Zdravka Ćuljak from Switzerland.

In the settlement of Bare, 2,396 square meters of land with devastated buildings were bought for 84 thousand BAM, which Bernadica and Dragan formally bought from Čuljak in 2011 for 330,000 BAM. According to documents, instead of money, they gave her a 76-square-meter apartment in Makarska, which Bernadica bought in 2000 for nearly BAM 138,000. However, CIN reporters learned that the utility bills for this apartment still come in the name of Bernadica Čović. Also, according to land registry records, she is still registered at this address.

It has been 11 years since the property exchange,  but according to the available documentation, her aunt did not register the title deed over the apartment in Makarska.

Next to the land in Bare was her father’s land, which he donated to her two years later, and on which they built the magnificent Čović family mansion.

In addition to these properties, Bernadica is the co-owner of business space in Mostar, which she bought with her colleague Drinka Zadro in 2003. They purchased this 102 – square meter space for their Law Firm for BAM 80,000.

Unlike his wife,  rarely did Dragan Čović engage personally in real estate trading. In 1997, his father Frane gave him a house with a land area of 1,160 square meters in Ljuti Doc, a place between Mostar and Široki Brijeg. In the middle of 2020, Čović sold this house.

After his father’s death, he inherited a 358-square-meter house in Mostar.