For five years the Prosecutors’ Office and police in BiH have continuously uncovered the masterminds and associates involved in counterfeiting Bosnian identity papers. Many abuses have been reported and those who got false documents include criminals and citizens from neighboring countries.

Hundreds of people, including criminals, managed to obtain counterfeited Bosnian documents. These fake documents enable them to avoid justice, police and prison but also to cross borders freely, to obtain passports and visas, and abuse them in many other ways.

‘This is how terrorists, war criminals, drug dealers, car thieves, people who commit business fraud, people who engage in economic criminal can hide. This is how they can register various citizens associations, private companies’ said Gojko Vasić, a head of the Republika Srpska (RS) Crime Police.

Over the past two years, the Prosecutor’s Office of Bosnia-Herzegovina (BiH) has conducted a wide investigation into forgeries and illegal issuing of Citizens’ Identity Protection System (CIPS) documents. Prosecutors said it is difficult to state precise figures, but they suspect that hundreds of people, including criminals, have obtained bogus BiH IDs.

This has shown that CIPS, designed to be a system that would thwart forging of identification documents and the use of fake IDs and help fight against organized crime, has not lived up to expectations.

Boris Grubešić, a spokesperson for the BiH Prosecutor’s Office, said 70 people are believed to be masterminds and facilitators behind those activities. So far, some 25 suspects have been arrested, including municipal officials and employees of law enforcement agencies that issue personal documents.

For example, Mladen Smiljanić, who worked as a investigator in Brčko District police and was also the local contact for the Interpol’s office in Sarajevo, was arrested in February 2009. In the indictment, he was accused of hiding a warrant against an unnamed person from Serbia, in order to enable this person to obtain Bosnian papers. For his services Smiljanić asked for either some 4.000 KM or a motorcycle.

Criminal activities have been discovered throughout the country, but mainly around Banja Luka, Brčko, Bijeljina, Bratunac, Vlasenica, Tuzla and Sarajevo. According to the BiH Prosecutor’s Office, original looking IDs and passports with fake names can be easily obtained for €2,000.

The BiH Prosecutor’s Office said in a statement sent to the Center for Investigative Reporting in Sarajevo (CIN) that bogus IDs could have been obtained by forging old identity papers and other documents, — birth certificates, certificates of citizenship. These fake documents were then used for issuing new identity cards.

Prior to the ongoing investigation, the BiH Prosecutor’s Office conducted another one in May 2005. The result of this investigation was the Court of BiH’s conviction of Cvijo Tovilović, an employee of the RS Ministry of Interior (MUP) in Banja Luka.

Tovilović, who worked in a division that issued CIPS personal documents, was sentenced to 18 months in prison for abusing office and authority. In addition, Milisav Knežević, an unemployed policeman, was also found guilty and sentenced to two years in prison.

Knežević found people interested in acquiring fake IDs, and would then provide the documents to them for a fee. First, he would furnish his clients with forged identity cards issued in the Federation of BiH, and with bogus notices showing they left this part of BiH. These documents are essential for getting a new identification card in a new place of residence.

Old IDs featured a person’s real photos, while other identification information was attributed to other people who have already been registered in the CIPS database. That would raise no suspicion that there was any illicit activity going on.

Using such counterfeit documents, Tovilović made official and approved a number of such requests and new IDs with fake content.

According to Vasić the police discovered around 150 bogus IDs during that period. But the identities of people using the documents could be pinned down in just a third of cases.

‘The others are still able to use their IDs, although the CIPS IDs have been cancelled and archived. Nevertheless, the person can get around Serbia freely with that ID, the person can move around Croatia freely, the person can acquire certain rights without that being known here’ Vasić said.

The case of Stanko Vujičić shows how Knežević, who had already been prosecuted for forgery, and Tovilović operated.

Vujičić found people in Banja Luka who could help him to get a new ID and a passport in a fake name in order to get a visa for Austria. The police investigation showed that he had a criminal record in Austria for inflicting bodily harm.

In a statement at his trial, Vujičić said that he was asked to pay 1,500 KM for false documents. He was to pay after he received the new documents. However, Tovilović and Knežević were arrested as they handed him his new identification card.

Another witness, Amir Zahirović, confirmed that he paid 3,000 KM for a counterfeit ID and a passport.

The current investigation has shown that criminals have also gotten hold of CIPS documents with bogus information, but the BiH Prosecutor’s Office is not willing to disclose specific names before the indictments are filed.

In September of 2008, a District court in Bijeljina sentenced Slađan Lonco to two years and nine months in prison for illegal production and trade of narcotics, and for forging identification documents.

Lonco had been using a fake name of Dejan Marković since 2003 – the name on the counterfeited ID he had gotten from CIPS’s office in Banja Luka.

According to Gojko Vasić, police found three stamps in Lonco’s apartment in Bijeljina during a raid in 2004: the stamps of Zenica, Bugojno and Novo Sarajevo police. Police analysis revealed that 70 IDs were issued in Banja Luka using forged documents certified with those stamps.

Lonco’s brother Slaviša, who was using the alias Dragan Popović, was among the people who had acquired the false documents, Vasić said.

Another person using a false identity, going by the name of Spomenko Marijanović, was Đorđe Ždrale. He was indicted in August 2009 at the BiH Court for the 2000 murder of Ljubiša Savić aka Mauzer, the former head of the RS Police.

The verdict against Tovilović and Knežević underlines a separate, even bigger problem: based on their counterfeit IDs, people are able to get passports and visas and travel abroad.

This means that convicted criminals, people who have committed felonies or were at large, can move around freely, without restrictions.

The counterfeit document problem is especially pertinent because BiH does not extradite it citizens to other countries under its Criminal Procedure Law. If a person with BiH citizenship and BiH IDs commits a crime in, for example, Croatia, he won’t be extradited once he has made it back to BiH.

The same goes for Croatia and Serbia whose constitutions do not allow for the extradition of their citizens.

‘There are some persons from the neighboring countries who have illegally obtained Bosnian personal documents. A common scheme was to use the counterfeit identification cards from, say, Serbia, as a basis for getting Bosnian documents’ said the BiH Prosecutor’s Office.

Milivoje Andrić, arrested in the Brčko District in March 2009, was suspected of having obtained his BiH citizenship and personal documents on the black market. Serbian authorities are after him on charges of threatening the public security, illegally carrying firearms and explosive devices, reporting under false pretences and pimping. The BiH Prosecutor’s Office would not release information about his status.

‘All people who were admitted into Bosnian citizenship illegally due to providing false information or because of the illicit activities of officials at the institution that provided the citizenship, such a decision can be erased. And then when this person has lost his BiH citizenship, he can be extradited to a country whose citizenship he holds’ said the secretary of BiH Justice Ministry Jusuf Halilagić.

The dual citizenship issues should be somewhat resolved with agreements on legal cooperation among BiH and Croatia and Serbia which should be signed very soon. The most important change would be that people sentenced in one of the countries, could not hide in another of the three anymore. They would, however, be allowed to choose what country’s prison they wanted to serve their sentence. 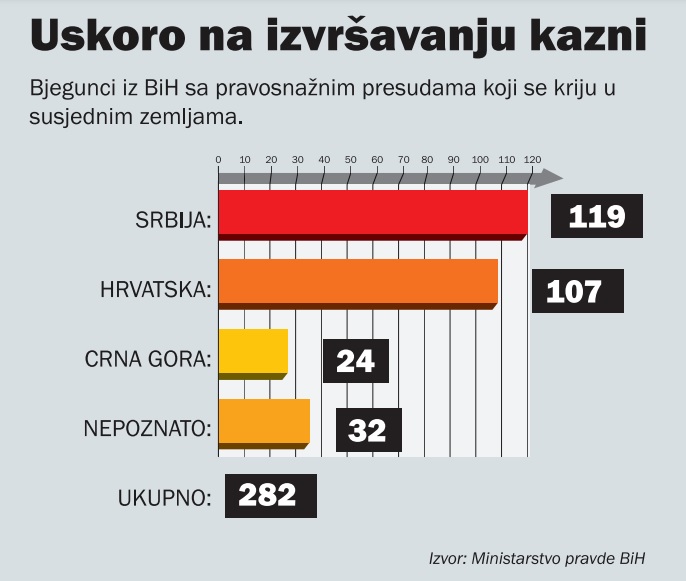 According to data from the BiH Ministry of Justice, 282 people have been sentenced in BiH and are at large in other countries, including some sentenced for felonies to between 15 and 20 years in prison.

According to Croatian police records, authorities there are seeking 47 people thought to be living in BiH. Neither the Serbian Ministry of Justice nor Serbian police have the complete information about how many of its citizens are hiding in BiH.

‘We will certainly ask for all those persons to be arrested—once we sign the agreement –and that they begin serving the sentence’ Halilagić said.

But new agreements will not solve the entire problem. BiH Ministry of Justice said that with either genuine or bogus documents, people currently on trial and charged will continue hiding from the justice in other countries.