Professional legislator is one of the most profitable occupations in BiH. Big salaries for little work and additional sources of income are some of the perks and now members of parliament don’t even have to show up to get paid. 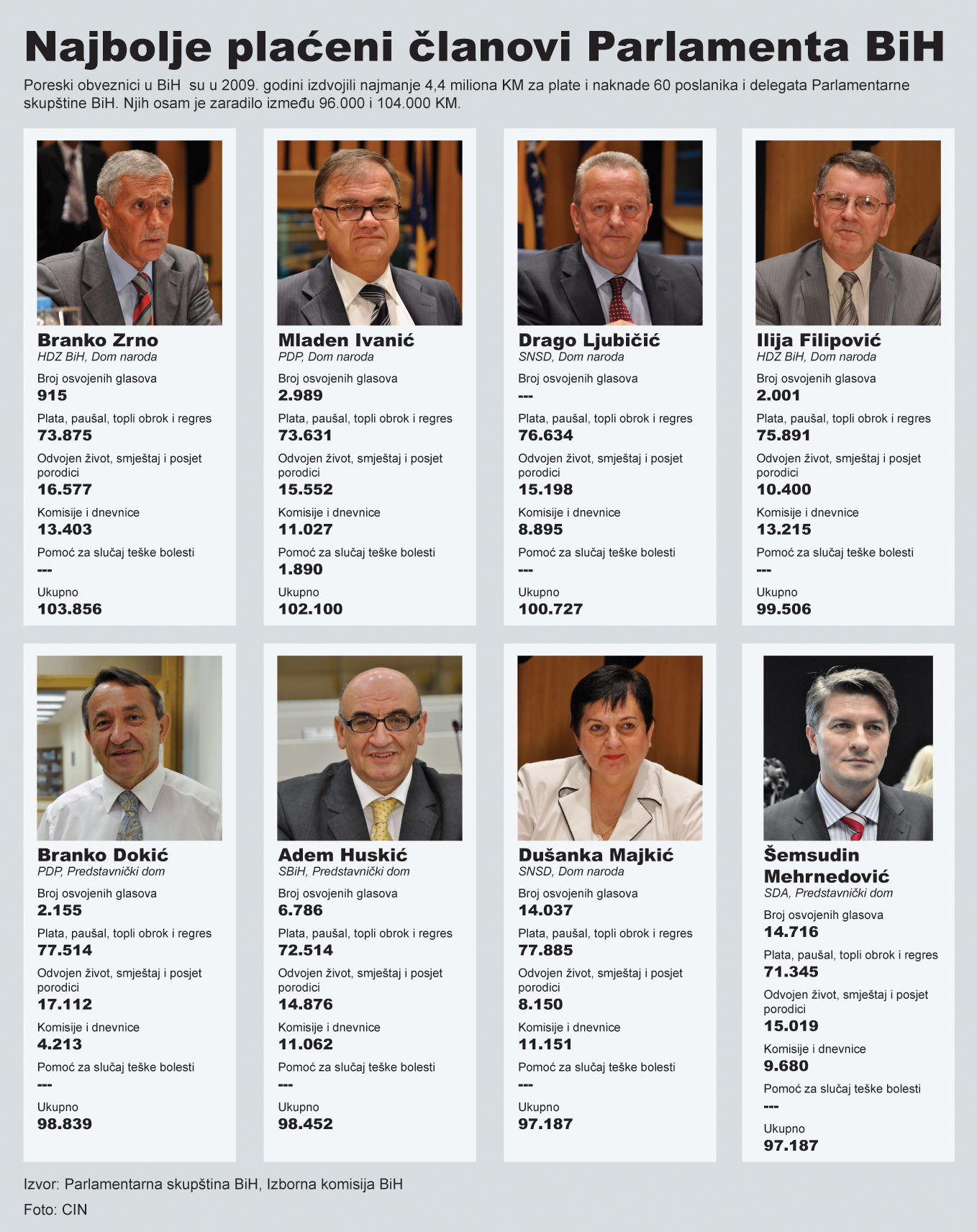 Taxpayers in Bosnia and Herzegovina (BiH) pay some 4.4 million KM for salaries and fees that go to 60 members of parliament and delegates to the BiH Parliamentary Assembly. A third of that sum goes to just 15 legislators and delegates.

According to data the Center for Investigative Reporting in Sarajevo (CIN) obtained, three men — Branko Zrno, Mladen Ivanić and Drago Ljubičić – took the biggest share of legislative pay. Each earned more than 100,000 KM.

Half of all MPs and representatives earned between 70,000 and 90,000 KM. In contrast, six MPs – Ekrem Ajanović, Zlatko Lagumdžija, Sead Jamakosmanović, Božo Ljubić, Sadik Bahtić and Azra Hadžiahmetović refused to accept professional status in the BiH Parliament and so received only 8,000- 38,603 KM

MPs and representatives continued receiving the same monthly allotments this year, even though BiH Parliament failed to pass less than half of the 126 laws members themselves pledged to act on in 2009.

Apart from salaries, MPs collect session attendance fees, per diems, reimbursement for rent and payments for visiting their families. They are compensated as well for being separated from their family. These and others privileges are defined by the Decision on the Ways of Calculating Salaries and other Material Rights of MPs and Representatives in the BiH Parliament and a rule book legislators themselves vote for.

On top of all that, salaries are paid regardless of how or whether legislators attend sessions or whether they have any citizen support to be in office.

Ljubičić, the Alliance of Independent Social Democrats’ (SNSD) highest earner, didn’t need a single voter to end up with an income of 100,099 KM last year. He was appointed to the House of People by the RS Assembly. Zrno, also from HDZ, received 915 votes to win election and a salary of 103,855 KM.

Salary by the BiH Constitution

At the end of the four-year term some of the MPs CIN interviewed said that they were not the ones who decided what their income should be.

In its report on the workings of the BiH Parliament, the Centers for Civil Initiatives (CCI) stated that last year saw several failed attempts to cut representatives’ salaries. MPs have cited the need to change the BiH Constitution, which stipulates that salaries of state government officeholders cannot be decreased during their terms. CCI said that representatives and delegates could have easily changed this constitutional provision had they been willing.

Even though he is one of the best paid legislators, with an income that last year tallied 102,099 KM, Ivanić, the leader of Party of Democratic Progress (PDP) spent the least time of any official at the 2009 BiH Parliament’s House of Peoples. He was present at no more than seven of 18 sessions.

Ivanić gave excuses for his absences and collected 9,190 KM in a MP fees (fee given to every member of parliament for exercising his duties) on top of his a 61,965 KM salary. He also got 1,888 KM for lunch, 3,600 KM for living away from home, 6,000 KM for his apartment in town and 5,712 KM for working on commissions. He received 586 KM of vacation compensation as well as 5,952 KM fee to visit his family in Banja Luka. He also received per diems for travel in country and abroad of 5,314 KM, and an assistance of 1,890 KM for his illness (cardiac arrest).

Ivanić, who joined the BiH House of Peoples after winning 2,989 votes in the 2006 general elections, says that the work plan of BiH Parliament does not depend on him and that he did as much as the Parliament’s leadership demanded of him. He also said he had nothing against the idea of salary decreases.

Salary is just one revenue stream for MPs and representatives. Those who don’t have Sarajevo residences are entitled to 400 KM of monthly compensation to make up for being separated from their family, 500 KM for rent, and they can collect mileage reimbursement for visiting their families.

Nanić skipped three sessions of the House of Representatives and Dolić six. Both justified their absences and collected their 9,190 KM in attendance payments. Both say it costs them more to visit their families because of the long trips they must make.

‘I think that my earnings and those of any other MP are incompatible with the results and the current situation that BiH is in’ said Dolić. Yet Dolić still accepted the funds.

Jadranka Korać, head of the Financial Department of the BiH Parliament, says that MPs are entitled to four trips a month paid for out of the government budget. This fee is related to the use of a personal car and calculated based on the number of kilometers times 20 percent the cost of a liter of fuel.

MPs who don’t collect family visit fees, are entitled to compensation for the use of their car to go to Parliament, said Korać. Legislators can also choose to hire a personal driver who is paid from the budged a per diem of 100 KM, a salary and a hotel.

Last year’s auditor’s report of the BiH Parliament found 252,116 KM in charges for personal vehicles for official reasons. Auditors suggested ending the practice of short-term contracting of drivers until a law regulating the matter was passed and they criticized the fact that drivers are compensated in cash.

Mirko Okolić, an MP from the Serb Democratic Party (SDS), comes to sessions in his car. Okolić does not use the family separation, accommodation and visit-to-family fees, but he collected 6,317 KM in the use-of-private car fees last year, more than any other MP.

Commission fees are one of the biggest sources of income for MPs. The joint commission for administrative affairs of the BiH Parliament passed a decision last September to compensate only those MPs who work on ad hoc commissions for limited periods. Still, MPs managed to make a lot of money on those commissions.

Last year, an HDZ 1990 representative Vinko Zorić collected 12,257 KM for commission work in addition to his regular pay — and amount that is more than 15 times the average BiH salary of 802 KM. Ilija Filipović from HDZ BiH and Dušanka Majkić from the Alliance of Independent Social Democrats (SNSD) earned 9,912 KM and 9,591 KM respectively.

‘The Joint Administrative Commission has established the level of compensations for ad hoc commissions to be 498,10 KM a month, and this amount has not changed since 2008’ explained Jadranka Korać.

Per diems are another source of income. During the last year, the biggest earners were Branko Zrno with 7,025 KM, while Azra Hadžiahmetović, Milorad Živković, Mladen Ivanić, Milica Marković and Ivo Miro Jović each collected an amount that combined exceeded 5,000 KM.

Legislators’ big pay and extras do not coincide with hard work or results.

The CCI investigation has shown that MPs and representatives in 2009 passed 42 percent of the laws they themselves planned to work on. BiH MPs on average needed 104 days to pass a law — around 3.5 months from the moment a bill is entered to final passage in both houses.

The BiH parliament passed 62 laws in the past year, while the National Assembly of Republic of Serbia passed 264 laws. The Serbian assembly averaged 22 laws a month, while the BiH body averaged 5.1. The state MPs in BiH significantly lagged behind their Croatian peers. The parliament or Sabor of the Republic of Croatia, passed 223 laws in 2009, almost 3.4 times the BiH record.