Salko Kamerić from Kalesija managed to liquidate his firm without paying a tax debt of 1.5 million KM. He pulled this off because of some lucky stalling by a department at the Indirect Taxation Administration headed by his cousin. 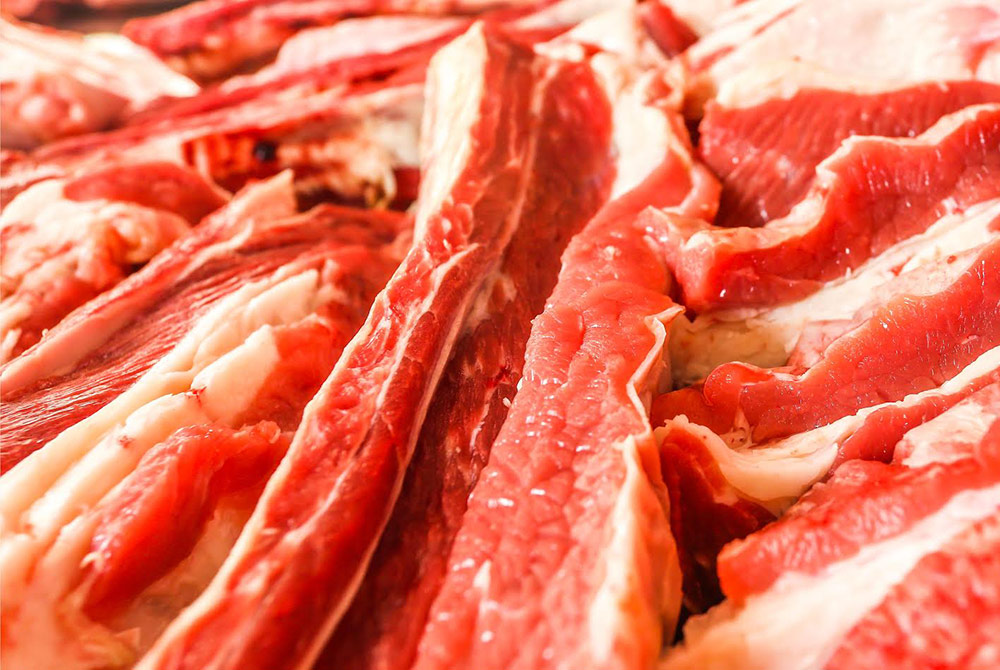 The Kamerićs from Kalesija bred cattle and sold meat for more than four decades. Salko Kamerić inherited the business from his father Mumin, and 17 years ago, he founded Salko-Mex. The family slaughterhouse processed cows bought from farmers in the villages around Kalesija and on the cattle markets. They sold meat in butcheries and to government institutions in the Tuzla Canton.

But business went downhill in 2013.

That year, the Indirect Taxation Authority of Bosnia and Herzegovina (UIO) found that Salko-Mex had underreported tax obligations nearly seven times over five years and owed 1.53 million KM in value added tax. There was no way to collect because Kamerić had already liquidated the firm.

This shouldn’t have happened. The FBiH Law on Liquidation Proceedings makes clear that a firm with debts cannot be liquidated. Kamerić pulled it off with help from tax officials in the Audit and Control Department. That department belongs to Tuzla Regional Center and is headed by Kamerić’s cousin Ševal Alić.

It took them more than two years to establish Salko-Mex’s VAT debt. The delay was crucial – without a debt recorded in the central system of the department the way seemed clear for liquidation.

After all this, the family is still making a living in the meat business. Kamerić’s son Adnan runs the Dollar Company in the same buildings and with some of the same customers as his father.

In 2012, tax officials launched an investigation code-named “Operation Meat” to discover if meat traders in BiH were underreporting revenue to evade taxes.

Salko-Mex got caught. Investigators found it had issued 4,134 sales receipts for cattle bought from ranchers between mid-2011 and mid-2013. The breeders needed to show receipts to get grants from the Ministry of Agriculture. However, there was no corresponding record in the firm’s financial statements either of the cattle for which Kamerić issued sales receipts or of its butchered meat.

Of 55 firms investigated, Kamerić’s firm owed the most in unpaid taxes, it turned out.

In 2014, Kamerić appealed, saying that his slaughterhouse and butcheries didn’t have the capacity to handle even half the number of cattle the taxmen reported it had. He said that he had not bought cattle and that the sales receipt books he issued to ranchers were bogus.

These Kamerić’s statements were neither discussed nor addressed by the decision issued in Tuzla, as they should’ve been, according to the Administrative Law. However, the tax department’s head office in Banja Luka looked into Kamerić’s complaint.

Azra Dedić, the head of Legal Affairs voided the decision issued by her Tuzla colleagues and ordered them to issue another one within 15 days.

With that voiding, Salko-Mex’s debt was automatically erased from official records. Another decision by the Task Force for Audit and Review was required to put it back on the books.

But Dragica Žugić, head of the task force head, did not rush to do so.

At the time she was dealing with accusations of authorizing the illicit return of nearly 800,000 KM of VAT to the BH Heart Center in Tuzla: “I was expecting any moment to be suspended. Was I supposed to be looking into Salko-Mex then’?“ said Žugić. She also said that the inspector who conducted the first inspection had left and it was hard to find a replacement during the New Year holidays.

Žugić was suspended between March and November of 2015 before she was acquitted of wrong-doing in the Heart Center case. Next, she took a leave to work as assistant to the director of Republika Srpska Tax Authority in Zvornik.

On March 23, 2015, Vladimir Maksimović succeeded Žugić. It took him nearly two months to order inspector Jerko Pejanović, to do another inspection in Salko-Mex.

But no inspection took place. Pejanović wrote in his Decision on Suspending Inspection that he could not do his work because the State Investigation and Protection Agency had confiscated the firm’s records.

It took 14 months for the Task Force for Audit and Control to establish that Salko-Mex owed 1.53 million KM in VAT. As it happens, photocopies of the confiscated documents had been in the administration’s offices all along.

Meanwhile, Kamerić had taken his opportunity and filed for liquidation.

The Task Force had an obligation to review Salko-Mex’s books before the liquidation. However, instead looking into the suspicious period between 2008 and 2013, they reviewed only the period starting in mid-2013 when Kamerić’s firm had less business. They found that that the firm’s debt was 792 KM which Kamerić paid. The last obstacle was over and Salko Mex was liquidated in November 2015. 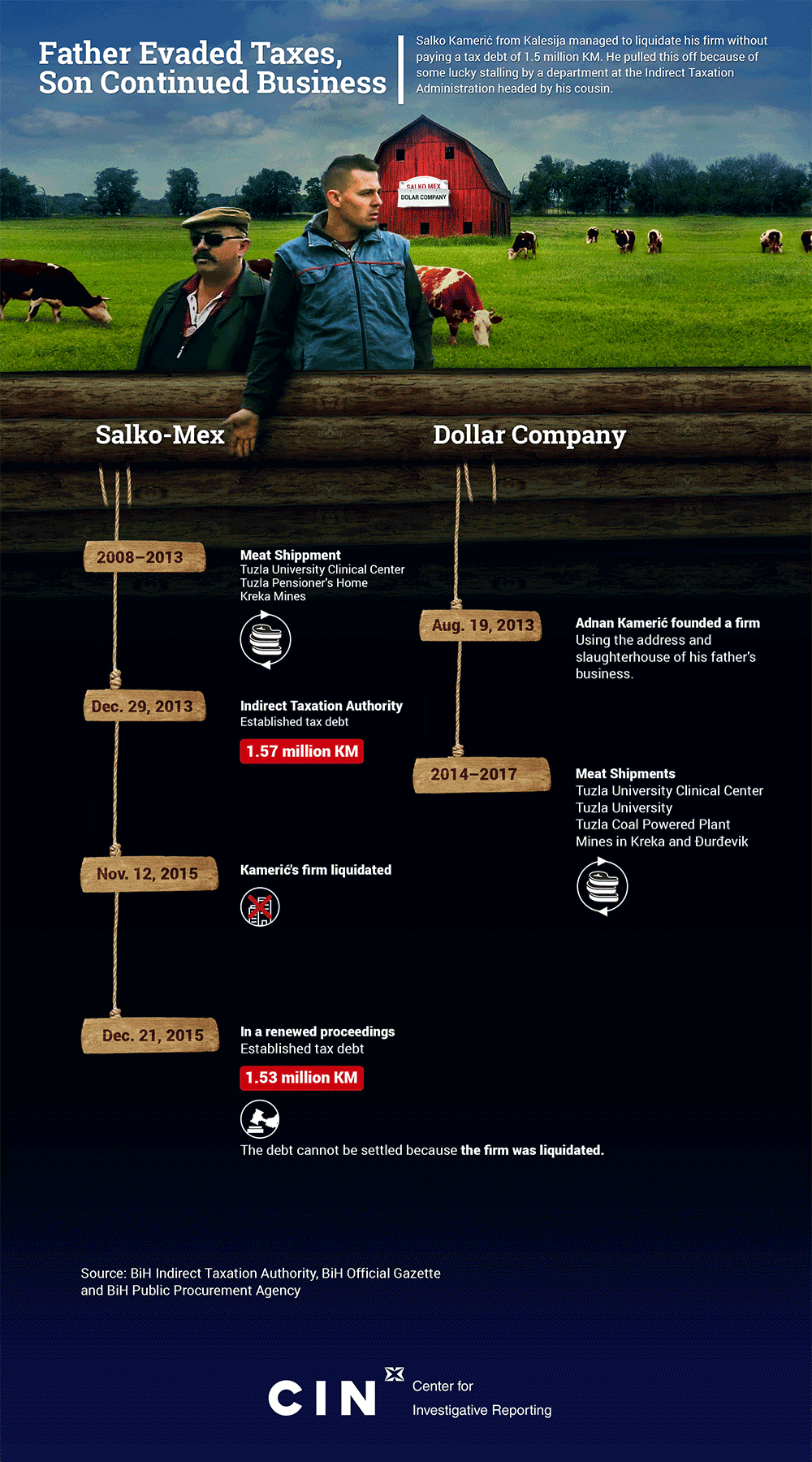 Alić, Maksimović and Pejanović did not want to explain for CIN how all this happened, even though Tax administration Director Miro Džakula approved an interview with them.

Alić said in an email that he could not discuss confidential information because he might be subject to disciplinary action.

Forty days after the liquidation the Task Force issued a new decision that found Salko-Mex owing 1.53 million KM for VAT.

It was too late to collect. Salko-Mex was erased from the Court register in 2016. The firm doesn’t exist and Salko Kamerić has no property in his name. Kamerić did not want to speak to CIN.

In December 2017, tax officials wrote to CIN that Alić’s responsibility was not established because his underlings Žugić and Maksimović were in charge of reopening the investigation.

Alić subjected those two to disciplinary proceedings only after Banja Luka HQ had asked him to.

“According to the job classification this was his responsibility. I may say that I’m not responsible for the UIO’s work, but I’m the most accountable. Everyone is accountable according to his part of work and job description,” said Džakula.

He said that the case is still open, thus Alić was not yet in the clear.

“In any case, when it comes to UIO we will get to the bottom of this. Because of such acts, public finances have been damaged and everyone should be held accountable.”

Plea of Guilty to One Crime, Acquitted of Another

The Prosecutor’s Office in Tuzla filed an indictment against Kamerić on charges of falsifying documents. He pleaded guilty and was ordered to repay the 70,000 KM he illicitly obtained from selling the receipts. In July 2017, the Municipality Court in Tuzla sentenced him to a two-year sentence, suspended if he does not commit a new crime within four years.

Kamerić’s son Adnan is still in business at the same address as Salko-Mex and using the same slaughterhouse.

Adnan Kamerić is a councilman of the Party of Democratic Action in the Kalesija municipality. He said that he saw no need to explain himself to anyone and that his firm had nothing to do with his father’s firm.

Adnan inherited his father’s clients as well as his facilities. He delivers meat to Kreka Mine and the Tuzla University Clinical Center.

Between 2014 and 2017, the Dollar Company made contracts with the hospital to deliver more than 1.4 million KM worth of beef. The Audit Office for the Institutions of the Federation BiH found that four annexes were added to the 2014 contract which was out of the line with the BiH Law on Public Procurement.

In 2014, the Tuzla Clinical Center signed a two-year contract with the Dollar Company about consecutive supply of meat with worth more than 802,000 KM. The contract was extended through annexes and the hospital continued buying meat from the company for another 11 months. This institution used to do business before in the same way. When a contract with Salko-Mex ran out, it would be extended.