The court charged with enforcing the Constitution of BiH must also hear all appeals from the lower courts, leaving it hard-pressed to keep up with its primary duty. 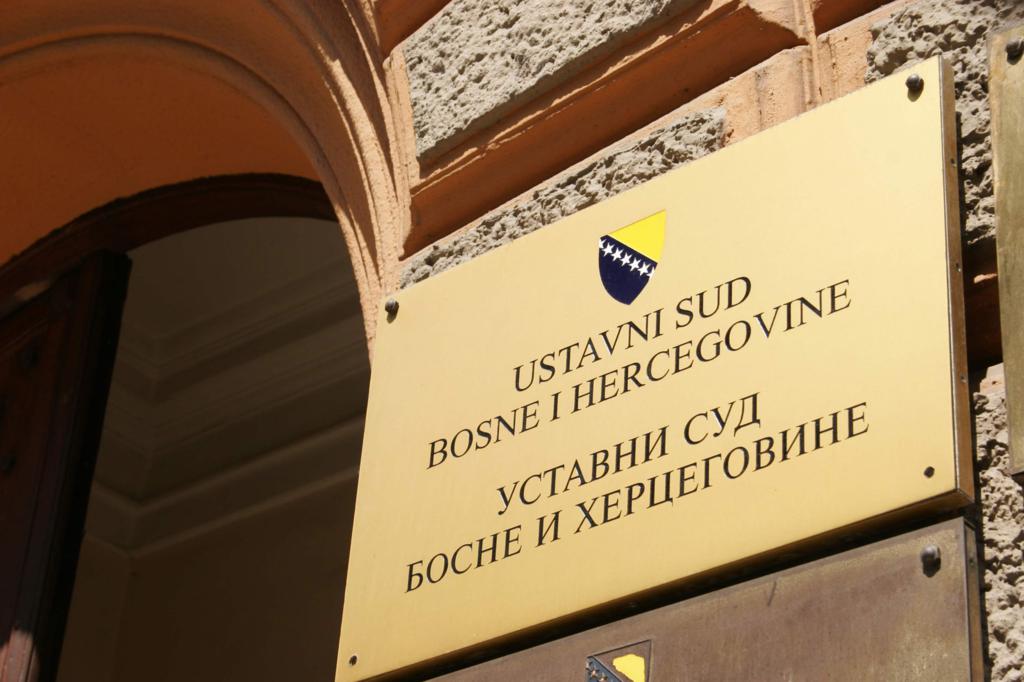 When the municipality of Velika Kladuša expropriated Ahmet and Šefik Ćufurović’s house and land near Hajrat for a quarry in 1986, the brothers protested. They appealed to government agencies for fair compensation but received no help. So they put their trust in the law and filed lawsuits in Basic Court.

Before it was over, their case would wind its way through at least six courts leading up to the Constitutional Court of Bosnia and Herzegovina (BiH). In the meantime, war broke out, raged, and peace returned. Yugoslavia disappeared, and they found themselves living in a new country.

On Feb. 15, 2007 – 21 years later – the Constitutional Court finally ruled. In what probably did not come as a surprise to the brothers, the judges found that the Ćufurovićs’ basic human right to a speedy trial had been violated. The court ordered a local court to decide the property matter promptly. In late May 2007, a local court delayed its decision. Ahmed died five months later. The case remains active.

This may be an extreme case. But if the Ćufurović brothers brought the same lawsuit today, there is no guarantee they’d have a ruling in less than a decade, say many of the 40 current and past judges, administrators, lawyers and other users of the court who were interviewed for this story.

Case Logjam in the Constitutional Court

The BiH Constitutional Court is the highest judicial authority in the land. It is charged with the critical task of assuring that the entities and central government adhere to the Constitution. But the approximately 20 cases per year that deal with those constitutional issues represent only a tiny fraction of the court’s work. Of the 9,987 cases the court received between 2005 and 2007, only 63, or 0.63 percent, were constitutional cases. The rest were appeals from lower courts. Thousands of these appeals each year are stretching the court’s capacity to the limit, distracting judges and the advisers who prepare cases for them from their primary focus on the constitutionality of laws, court watchers say.

“The court is in danger of being swamped” by appeals cases, said professor David Feldman, one of three international judges on the court.

He said the growing case load was his No. 1 concern at the court.

Rajko Kuzmanović, president of the Republika Srpska (RS) Academy of Arts and Sciences, a former judge and president of the RS Constitutional Court, said, “The court falls into a daily grind, and matters that are important and for which the court was established physically catch up.” The constitutional justices become clerks, which is not good.

On the other hand, the court has the last word on all cases appealed from lower courts on constitutional grounds, usually concerning human rights, About 3,500 of these cases were filed each year in 2006 and 2007, up from about 2,700 cases in 2005. The court began 2008 with a backlog of 4,582 cases. Partly as a result, a case filed today will take 18 to 24 months to be decided. A number of these cases seem unworthy of the highest court, some say.

“We have a target of 12 months” to hear cases, said Judge Feldman, but he conceded that the court has been slipping further and further from that goal.

“There is an appeal for the costs of proceedings for 132 KM, and we get that case,” said Dušan Kalamber, secretary general of the Constitutional Court. “And it is admissible because it is within the [allowable] time frame, and we have to process it and lose time on it because of 132 KM.”

Constitutional cases, more complex and often requiring extensive correspondence with state institutions, can take even more time to work through than appeals. The judges and their advisors say that constitutional cases have priority, and they won’t wait in line with the thousands of appeals. But the same staff of 18 legal advisers prepares both kinds of cases, and the same judges hear them and thus share the burden. Appeals cases are heard by the Council of Five Bosnian judges, while the full court of nine judges, including three internationals, hears constitutional cases.

It is possible that human rights cases could be decided on hurriedly, said Kuzmanović, adding that many other countries have the same problem.

The vast majority of appeals are unsuccessful. Human rights violations are found in less than 5 percent of appeals, according to court records.

Kasim Trnka, an Federation of BiH (FBiH) constitutional judge, agreed, saying ongoing debates worldwide are looking for a balance between the protection of human rights and the removal of all unjustified appeals from the courts.

Attorneys say they feel a duty to their clients to appeal cases to the Constitutional Court.

“I don’t want to miss an opportunity to save my client,” said Slobodan Cvijetić, a lawyer from Bijeljina.

Until recently, even those appellants whose case was rejected by the court had to wait years to learn the bad news. Administrators often ruled a year or more after the appeal was filed that a case can not be heard because proper paperwork was not filed or because the case did not concern human right.

The court recently has taken steps to stem the flow of less important cases. Since early 2008, legal advisors assigned to the new Department for Evaluation of Acceptability review cases and reject those that don’t meet the court’s criteria. A court spokesperson said it should be apparent at year’s end whether this case filtering process will ease the case backlog.

“This new department shows good results,” said Zvonko Mijan, acting registrar of the court. “We are talking about hundreds of cases already removed by the short procedure. The most important thing is that people don”t have to wait a year or two to find out their case was rejected for formal reasons,” he said. But some jurists and court watchers want deeper reform.

New Court, or Clean Up the Present Ones?

Ideas about how to eliminate the Constitutional Court logjam and free the judges to focus on constitutional matters of state fall into two categories: fix the existing system or create a new court.

Branko Perić, former president of the High Judicial and Prosecutorial Council, which has no power over constitutional courts, but for all other courts, appoints and removes judges and prosecutors and hears complaints against their work said appeals should fall under the jurisdiction of entity supreme courts.

“However, the constitution also furnished us with appellate jurisdiction. That is terrible, this is why we have such an influx,” she said.

Others said cutting off the flow of appeals at the entity supreme court level doesn’t go far enough. They call for the establishment of a national supreme court that would hear appeals from the lower courts.

“I would like to see, I always wanted to see, regardless of our workload, a Supreme Court of BiH,” said Hadžiosmanović-Mahić. “Besides civil, criminal and administrative departments, there would be another one, an appeals department, and it could deal with appeals. Let them be removed from the jurisdiction of the Constitutional Court.”

“This means that the state has an invalid judicial system, which means that it doesn’t have a judiciary suitable for the modern needs of individuals and society. In that sense, we are in the Medieval Age.”

The Constitution doesn’t provide for a national supreme court, but that’s not an insurmountable problem, said Professor Omer Ibrahimagić, former president of the Constitutional Court of FBiH.

“The OHR-created Court of BiH and the BiH Prosecution Office were established without provisions in Dayton,” he said.

“Yes, it does increase workload…but I think it is very important for complete protection of human rights,” she said.

Sevima Sali-Terzić, a senior legal advisor in the Constitutional Court and an unsuccessful candidate for a judgeship in the June selection, said she believes that increased efficiency of the lower court system could reduce the number of appeals and break the Constitutional Court’s case logjam. That would mean simpler procedures, internal re-organization and better use of staff. The court should be educating lawyers and others about what kinds of cases the constitutional court will accept, she said.

It soon will become even more critical that the court be free to pursue constitutional cases, as the “OHR’s transition to an EU-lead office will mean that the Constitutional Court will be the only arbitrator in disputes between different levels of government,” the High Representative said in May.

The Constitutional Court’s challenges don’t stop with a glut of cases, critics say. Some rulings, especially those that involve high-level politicians or government agencies accused of human rights violations, stymie the state prosecutor’s office, they say.

Over the past three years, 20 rulings out of 6,269 handed down by the Constitutional Court have not been enforced.

For example, in three 2006 rulings (AP 1226/05, AP 129/04, and AP 228/04) the Constitutional Court ordered entity and Brčko officials and the BiH Council of Ministers to enforce provisions of the Law on Missing Persons. The cases were filed by 475 individuals who lost relatives during the war. The court ruled that they had the right to information about the fate of their loved ones.

In its ruling, the Constitutional Court clearly defined steps the authorities must take. But nothing happened, and prosecutors have not followed up, according to the court and the prosecutor’s office.

Failure to enforce a ruling constitutes a crime and is punishable by imprisonment from six months to five years, according to the criminal code. The person who fails to implement a decision of the court goes to jail. When the court has established that its ruling has not been enforced past the deadline, it renders a decision on the lack of enforcement and passes it to the chief prosecutor of the BiH Prosecutor’s Office. The prosecutor is obliged to treat this as a criminal complaint.

A spokesperson for the State Prosecutors Office said that indictments were not filed in this case because the Constitutional Court’s rulings are too broad and simply blamed agencies and not the politicians who run the agencies.

Court watchers say it is ironic that too often in considering human rights cases, the Constitutional Court is violating the human right of a speedy trial.