In 2009, the Parliamentary Assembly of Bosnia and Herzegovina (BiH) gathered a nine-member strong team whose task was to select, oversee and suspend the chiefs of (the country’s various state-level) police agencies. They were informed about their operating rules – they could not be politically active and they had to convene at least once a month. The chair was to be paid 1,560 KM, and members 1,175 KM a month. They were called the Independent Board and fairness and expertise were supposed to be their greatest strengths.

However, over time the Board proved the opposite. According to the findings of the Center for Investigative Reporting in Sarajevo (CIN) its members fully complied with just one rule: they collected their fees on time.

Since its inception, 14 people have passed through the Board. At least three of them were affiliated with a party and voted following the party line. Another three persons worked in public institutions, which should have disqualified them through conflict of interest. In 85 months, the Board held 61 sessions and its members collected over 858,000 KM. 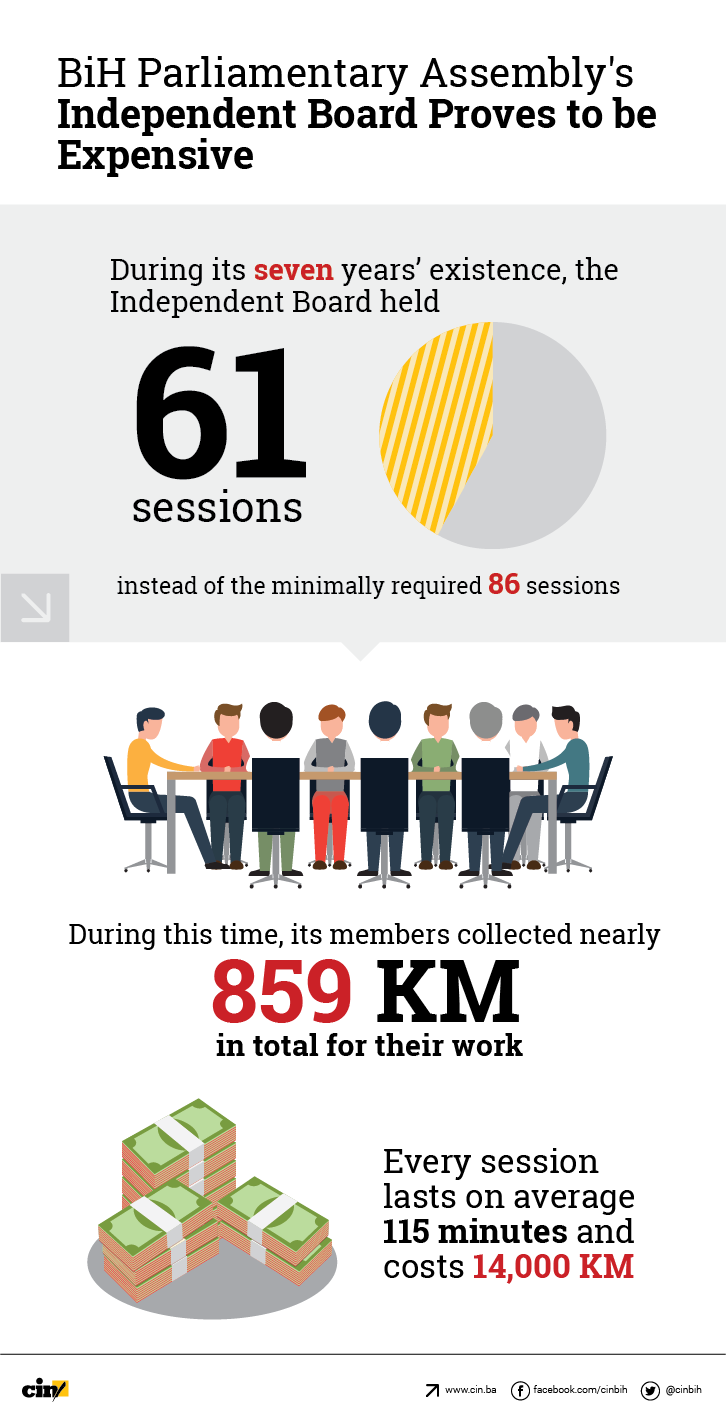 High Fees for No Work and Breaking of Rules

The first Board was made up of Viktor Dadić, Dragan Savić, Stanko Nuić, Zijo Kadić, Bakir Dautbašić and four other members who remained in the following term – Žiko Krunić, Enes Obralija, Mato Jozić and Ljubomir Kuravica. These four were joined by Ilma Mehić-Jusufbašić, Miroslav Škorić, Mate Miletić, Adisa Begić and Nikola Džambas in the second term.

The state parliament gave them discretion to decide how much they should be paid, which they decided upon at their inaugural session in 2009. The Board’s chairman received on average 1,560 KM per month, while its other members took home around 1,175 KM per month. Since last November, all of them have been receiving 475 KM. The fee was not reduced because of a lack of results, but because the Law on Salaries and Allowances in BiH institutions changed.

Since its inception, the Board missed every third session and for those it held it was rare to see all members present.

“They would not meet for months. They did not operate, while the fees were very good. That’s beyond me,” Dragan Mektić, BiH Minister of Security, told CIN.

All members receive monthly salaries in their regular line of work, while the money they receive for serving on the Board represents additional income.

The Board’s chair Žiko Krunić was the CEO of Ugljevik Mine and Power Plant until the end of last year. Now he’s the corporation’s executive manager for corporate affairs.

CIN learned that Krunić, the FBiH Justice Minister Mato Jozić and Adisa Begić, the Head of Cabinet of the BiH Minister of Traffic and Communication, are members of political parties. This is prohibited by the Board’s Rules of Procedure and should be punished by dismissal from the Independent Board.

Staff from the Ugljevik chapter of the Alliance of Independent Social Democrats (SNSD) told CIN that Krunić was in the local party leadership. Asked about his engagement with SNSD, Krunić said: “I have no clue. I don’t want to comment on hearsay.”

Earlier this year, Begić became the chief of cabinet for Minister Ismir Jusko from the Alliance for a Better Future (SBB). She told CIN reporters that she was not a member of a political party. However, staff from the party HQ told CIN that Begić and the Board’s former member Bakir Dautbašić are party affiliates:

“They have been there from the beginning…They did not join yesterday,“ said SBB’s spokesperson Omer Čevra.

At the end of March 2015, after six years on the Board,Jozić was appointed the FBiH Minister of Justice on behalf of the Croatian Democratic Union BiH (HDZ BiH). Even though HDZ’s web page calls him their minister, Jozić said that he was not a party member: “I’m just Mato Jozić.”

However, at the HDZ BiH municipal board of Jozić’s native Orašje, CIN reporters were told that Jozić was a party member: “But due to conflict of interest, he either put his membership on hold or left the party.”

Institutions Without Jurisdiction and Teeth

Jozić continued his work on the Independent Board even after he was appointed as a FBiH minister. However, the state-level Commission on Conflict of Interest said that there were no grounds to look into the potential conflict of interest in this case.

“Maybe the election law stipulates a certain incompatibility, but you should ask the Central Election Commission (CEC) about it,” said the head of Commission’s office Danka Polovina.

However, CEC officials said that they were not competent to deal with parliamentary appointments, only with those elected officials whose mandate they had verified.

No official from these institutions could explain to CIN whose job it was to establish if Jozić was in a conflict of interest.

Furthermore, not long after her appointment to the Independent Board, Ilma Mehić-Jusufbašić was hired by the Procurement Review Body (PRB). The Public Procurement Law of BiH, says:

“The PRB member’s term in office is incompatible with any other office, to be held either directly or indirectly, in permanent or continuous duty with the exception of academic, scientific or research activities.”

Mehić-Jusufbašić held to her term in the Independent Board after joining the PRB. She refused to talk to CIN reporters. No official knew who was competent to review if she was allowed to hold both offices at the same time.

The State Commission on Conflict of Interest did not open an investigation against Jozić and Mehić-Jusufbašić, but it did against the chair Krunić. However, it refused to divulge details about the case and wrote in its decision that “publishing information from the procedure of establishing facts could endanger the integrity of the appointed person,”.

The Independent Board failed to act in the case of Goran Zubac, the former director of the State Investigative and Protection Agency (SIPA). In June 2014, the Court of BiH confirmed an indictment against Zubac on charges of misconduct in office during the 2014 violent protests in Sarajevo.

According to a 2015 ruling, Zubac refused to assist the Directorate for Coordination of Police Bodies by sending a SIPA detachment that would help put a stop to the burning of the buildings of BiH Presidency, BiH Constitutionals Court and the state archives.

Before the verdict, the deputy chair of the Independent Board, Enes Obralija, had three times proposed a discussion about the events and the suspension of Zubac, but the Board did not act. Obralija said that his colleagues came up with various excuses not to deal with the issue: some claimed that Zubac was not a police official, while others said that he was appointed according to an independent procedure, and others still wanted to wait for a court ruling first.

A year and half after the protest, the Court of BiH sentenced Zubac to a one-year suspended sentence and only then did the Independent Board decide to ask for the SIPA director’s suspension.

“I think that the Independent Board failed the grade in the case of Goran Zubac,” said Obralija.

Krunić did not want to answer CIN reporters why the Board did not react in this case. According to a transcript of the session held in July 2014, Krunić was against suspension because he did not want “To end up in a situation in which there would be no police agency at the BiH level represented by one of the constitutive peoples, such as the Serbs to whom I belong.”

After the Zubac verdict, the state parliament set up a commission to investigate the work of the Independent Board.

Seven months later, the commission established that the Board did not meet regularly and did not initiate disciplinary proceedings when it should have acted. The commission’s report stated that the Board failed to act not only in the Zubac case but also after Serbian Prime Minister Aleksandar Vučić was assaulted in Potočari memorial center, near Srebrenica in 2015 (which falls under state level protection).

“For reasons known to them only they absolutely did nothing to initiate and launch disciplinary proceedings.”

In May 2016, the BiH Parliamentary Assembly’s House of Representatives adopted the commission’s report with recommendations, but it was rejected in the House of Peoples.

Karamatić told CIN that he changed his mind because the commission was unconstitutional as its make up did not represent proportionally all peoples: “We found ourselves in a position that out of six commission members three were Croats, two Serbs and one Bosniak…Discrimination is discrimination, even if it is positive. “

He considers the work of the Independent Board to be politically and ethnically motivated: “Those people vote as the political oligarchies and governing parties tell them to. This is no secret,” said Karamatić.

“But I’m not involved in the part related to end year reports, plans of activities or the work of the Independent Board”, Zdenka Džambas told CIN.

However, CIN reporters found that Džambas voted in favour of the Independent Board’s 2014 end year report and its 2015 plan of activities.

“If an elected official (holds office) in a body that oversees an institution in which his or her next of kin is an authorized person, this could be viewed then as conflict of interest,” Ivana Korajlić of Transparency International BiH told CIN.