Neum Parking Revenues in the Hands of HDZ Officials

Authorities in Neum are giving up millions in parking revenues in favor of a local official of the leading party that controls this tourist town on the Adriatic, violating the laws and hiding from the public the actual area of public spaces he rents out to a private individual and the fees he charges. 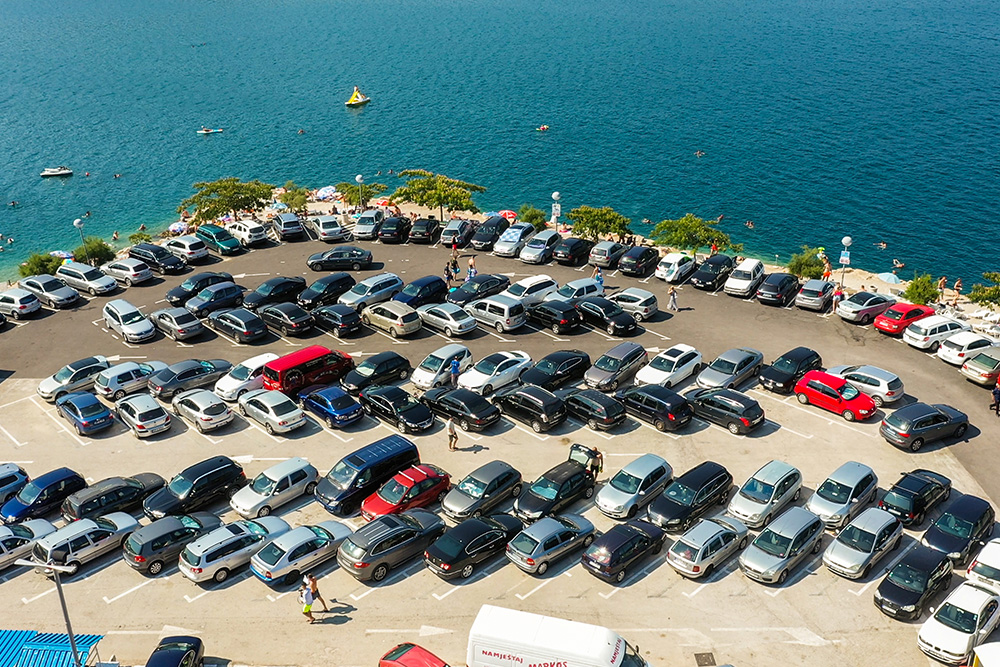 For 14 years, nearly all city streets, car parks, camps, garages, and other public areas near the coast in Neum have been temporarily owned by Bakus, a company run by Nikola Konjevod and his brother Cvitan, a member of the Municipal Board of the Hrvatska demokratskazajednicaBosneiHercegovine (HDZ) [Croat Democratic Union of Bosnia and Herzegovina].

The municipality ceded these public spaces at an unreasonably low price, so for Bakus, it takes only the daily parking revenue from one car park at the coast in a season to pay the rent. This car park can receive 100 cars and in July, while CIN journalists were staying in Neum, it was filled every day.

The remaining 1,600 spaces allow Bakus a huge profit. Car parks in Neum are mostly used by tourists who usually buy daily or weekly tickets for 8 i.e., 26 BAM, while owners of campers and buses pay 15 and 40 BAM a day respectively. Residents are not exempt from paying either, but they mostly buy cheaper semi-annual parking tickets of BAM 150.

The concession period lasts six months during which Konjevods can earn more than BAM 740,000 for only a third of the car park occupancy.

In the past 11 years, Bakus has reported an average annual income of only BAM 168,000. After the tax audit four years ago, the Tax Administration of the Federation of BiH established a debt of around BAM 180,000 in taxes, contributions, and other fees. In the same year, Bakus was the second-largest debtor in Neum, but by mid-2020 it was deleted from the register of debtors.

The tax administration refused to provide CIN with information on the debt and the repayment under the pretext of a tax secret.  The journalists also asked Bakus for licenses, but they allowed no sharing of information with the public about the business.

The journalists tried to get in touch with Konjovods but they did not answer the phone, nor did they answer the calls for interviews that were sent to them through their employees.

Municipality against its own utility

Although under the law it is required to award the car parks to its own utility company, the Municipal government in Neum long ago decided to leave the job to private owners.

Under the Law on Utility Activity of the Herzegovina-Neretva Canton (HNK), “a local self-government unit may entrust the performance of certain communal activities to a legal or natural person, based on a written contract, provided that there is no public company to perform that type of activity”.

The Neum Municipality founded a utility company 43 years ago. The registered activity of the company was parking management and safekeeping of vehicles, and according to the current mayor Dragan Jurković, the company had been carrying out this activity until fifteen years ago.

“It was a long time ago and it didn’t work out the way it should”, says Jurković.

The director of the public company “KomunalnoNeum”, LjubaGoluža, says for CIN that she would be happy if the company she manages would get one such deal, but for the company to be able to do it, she would first need to hire additional people and make some technical preparations.

The events that preceded the award of the concession in 2007 indicate that the local authorities decided to entrust the parking business to a well-known private businessman. In mid-March of the same year, CvitanKonjevod registered the company, which he named after the Roman God of fertility and pleasure. With the founding of “Bakus” [Bacchus], a fruitful time began for the Konjevod, who before this ran a modest car repair shop. However, the time was not as fruitful for the Municipality.

The Municipality, however, did not comply with the Law on Concessions of the Herzegovina-Neretva canton, which required it to seek the consent of the Government to assume the role of the concessionaire. It was also required to obtain the opinion of the competent Ministry of Construction and Physical Planning of HNKto launch the procedure for the selection of the concessionaire.

Under this Law, the concessionaire is the Government of the HNK, but it can authorize municipalities to make decisions on concessions and conclude contracts.

The Government and this ministry claim that the Neum Municipality did not ask for their consent or opinion for the award of the concession until the beginning of this year, nor did they address them regarding the car parks.

Mayor Jurković claims the Ministry informed the Municipality in 2007 that it could grant a concession, but he failed to submit the document proving this to CIN even after two weeks.

The first concession agreement with “Bakus” was concluded for five years, after which, the Municipal Council rendered a new decision extending the contract for another two and a half years. The last five-year contract was signed in 2019, based on an unsolicited bid by Bakus.

Initially, the company had to pay a fee of BAM 65 thousand, and in 2019 the agreed amount increased to BAM 81 thousand. According to the auditor’s finding, “Bakus” failed to make the payment for that year, and Mayor Jurković says that the debt has not been settled yet.

“The system works so far.  As for the financial side, it is another matter”, says Jurković.

The Municipality did not explain what basis they have to calculate the concession fee. The Mayor claims to have not interfered with that part and did not know the actual number of car parks in Neum. His predecessor, ŽivkoMatuško, did not agree to talk to journalists.

The concession contracts and documents stipulating the conditions of the concession do not specify the area of public space for parking, nor the number of parking spaces. It only says that the concession is granted on sites in 11 streets and three car parks.

Since data on rented public areas were unavailable, FBiH auditors found it impossible to calculate the amount of the concession fee.

CIN journalists visited all the locations listed in the concession agreement and after two days they counted at least 1,700 parking spaces. The number could be even higher because they did not take into account the spaces in front of the entrances to private apartments, although in such places they found cars with paid “Bakus” parking tickets. Also, in one-way streets, they counted parking spaces on one side only, although according to municipal decisions on the organization of traffic, the parking should be charged on both sides of the street. The journalists also discovered that this company charges for parking in several public areas and underground and above-ground garages that are not mentioned in the contracts.

The Municipality has not established a good organization of traffic, so the parked vehicles in Neum streets cause jams thus stirring constant dissatisfaction of guests. In many streets, parking places are not marked, and payment instructions are posted only at their entrances. Not all parking spaces are equipped with nearby parking meters.

In July, CIN journalists obtained 24 parking tickets from 2020 and 2021, which were issued at two Bakus car parks in Neum. The tickets contain the VAT numbers that do not correspond to the actual VAT number of Bakus, indicating potential abuses. Therefore, the journalists sent the parking tickets to the Tax Administration of the Federation of BiH, asking them to check whether they were issued in accordance with the tax laws and whether the revenue was recorded in the fiscal system. However, the Tax Administration refused to respond to these questions under the pretext of tax secrecy. They promised to ask the permission of Bakus to submit the data, but even after two weeks, no response.

State regulations require that all parking spaces on the ground be marked, with a prominent parking sign, says Adnan Tatarevic, technical director of the Institute for Transport and Communications in Sarajevo. If parking is organized in one-way streets, the minimum of three and a half meters must be left in such streets to provide for undisturbed flow of traffic. Several places in Neum do not meet these standards.

Although the guests of this place on the coast often do not know that they need to pay for these services, the Bakuscar park stewards forgive no one and often attach tickets of BAM 60.00 to the windshields, or wheel-clamp the parked cars.

The collection of these fines is guaranteed because “Bakus” was granted the status of an authorized body, and thus the right to enter data in the register of fines.

Dragan Vujičević, owner of an apartment in Mimoza Street, and Tatjana Arsić, a long-time guest of the apartment in his neighborhood, refuse to pay the fines. They claim they park their cars in the area that the Municipality previously allocated to Vujičević. Court decisions that confirm this stand in the windows of the cars as information for the Bakus collectors. Despite that, the car park stewards leave them parking charge notices every day.

Unlike Vujičević, who does not pay fines because he registers the vehicle in Germany, Arsić had to pay them because otherwise, she would not be able to register the vehicle in BiH.

The 2019 Financial Audit report of the Audit Office of the Federation of Bosnia and Herzegovina for Neum Municipality says that the Municipality does not have access to the data on the number of fines issued and collected by Bakus.

Bakus ceded its PCN claims to Euro Parking Collection Group, the British agency specialized in collecting traffic fines in the world. This agency, through its lawyers in individual countries, serves fines to guests in Neum.

CIN obtained a copy of the enforcement notice served to a former guest of Neum from PadinskaSkela near Belgrade by lawyer DejanSimić on behalf of EPC Group.

Presenting himself as a proxy for the EPC Group, Simić informed the car owner that in July last year he had been issued a PCN of EUR 55, and now he was required to pay an equivalent of EUR 130 in dinars, which is the amount of fine plus the interest, costs of attorney and postal costs.

Should he refuse to pay, Simić explained that he will seek the protection before the competent court and the enforcement authority, in which case the costs of enforcement will be borne by the former guest of Neum.

In the PCN, lawyer Simić explained that EPC Group purchased the claim from Bakus from Neum, which was described as a public company. Although announced that Simić would talk to journalists, he never responded to the calls.

Based on the concession agreement, Bakus has the right to use the parking lots for another two years. This year, the new Mayor and the Municipal Council decided to review the deal with the private businessman. They requested the utility company from Neum to report on the personnel and technical capacities available to do the job.

Also, they decided to follow the letter of the law i.e., to send a request to the Government to approve them as a concessionaire.

“I want to look forward and I simply want everything to work the way it should and in accordance with the law,” says Jurković.