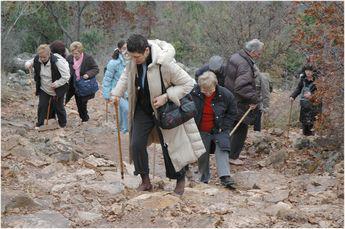 In a tiny Bosnia-Herzegovinan town made famous by a series of mysterious appearances that began a quarter-century ago, some unexplained disappearances recently are getting attention.

Since 2001, seven Catholic pilgrims who came to share in the religious miracles reported at Međugorje have dropped suddenly out of sight. Five later turned up dead and two, including 59-year-old Winifred Brady of Dublin who arrived in early September, remain missing.

Church, municipal and police officials disagree on who should shoulder responsibility for insuring that the half-million to 1.5 million visitors a year who come into BiH’s biggest tourist draw stay safe; instead they do agree that with all those visitors, unfortunately, some deaths are to be expected.

That is not an expectation in other European cities that pilgrims travel to.

‘Oh my God’ said Dina Simoes, a spokeswoman for the the Shrine of Fatima in Portugal, when asked about seven people who had gone missing in Međugorje. ‘That’s completely unusual here. I’ve never heard of that here.’ Since 1917, when three shepherd children said the Virgin Mary appeared six times to them, more than 4 million visitors a year, many of them elderly or sick, visit Fatima.

Lourdes, France, where 14-year-old peasant girl Bernadette Soubirous had 18 visions of the Virgin Mary in 1858, attracts up to 6 million pilgrams a year, many of them the seriously ill and in search of healing. ‘It’s never happened in Lourdes’ said Frank Delahaye, communications director for the Lourdes Tourist Office, ‘never, no.’

In 1981 six youths, 10 to 17 years old, reported that Mary, the mother of Jesus, appeared atop a remote rocky hill in Međugorje and spoke to them. Now grown, they continue to report on visits and messages from Mary.

While church officials in Rome are careful to say the miracles remain unproven, believers from around the world flock to Međugorje. Tours, special flights and a thriving hotel, restaurant and retail business have grown up to accommodate them.

Brady had already been to Međugorje twice when she joined a tour group in September organized by Paddy Travel. Thirty Irish pilgrims, including two friends, stayed at the Lola boardinghouse. That’s where she was seen last.

On Sept. 5, she’d called her husband, Stephen, in Dublin. She told him she didn’t think she could make it up the steep, rock-strewn footpath that leads to the spot where Mary first appeared. Brady uses a cane and is a smoker. She’d had an argument with her friends, gotten a separate room, and she felt like she wanted to come home. He told her to relax and just stay in the town. The tour was only a few days longer.

Adrijana Čolak, whose mother owns the boardinghouse, said Brady asked her for some ice the next morning, saying she would pick it up later. She never did.

Later that day, worried, her friends went to Danijela Sušac, a Paddy guide, who didn’t remember Brady clearly. They searched everywhere they could think of then called police at about 2 a.m.

Did police do enough?

Police Chief Ilko Musa said that over the next 10 days his 10-member force brought in a special unit with dogs and hunters who know the woods, to help search. They didn’t find a clue.

Čolak said big searches were organized after Stephen Brady flew in and requested action. That took a few days because he didn’t have a passport. Friends helped him get emergency documents and his brother flew with him.

But Brady makes no criticism of the police. With three shifts, the department has just three people on at any time. Three people can only do so much, he said. He remains in touch with Tom Daly, an Irish police officer stationed with the European Union Police Mission near Međugorje.

Musa downplayed any idea that Brady’s disappearance was disturbing. Međugorje gets a lot of visitors, some old, and some with physical or phychological problems, he said. And older people wander off.

Media accounts about Brady have been colored by Musa’s views. They have suggested that her disappearence was connected to alcohol or to anti-depressants she began taking when her 19-year-old son died a decade ago. They have noted that she might have wandered off and gotten lost in the rocky countryside around the town.

But her husband of 42 years says he isn’t sure she was still taking the pills she needed after their family tragedy. He is sure she wouldn’t have wandered anywhere when she was having trouble walking. He found her room in order with nothing missing. Colak said Brady had been cheerful and helped her clear off a table the day before she disappeared. She said she never saw Brady tipsy and while she had a drink or two with dinner, there were no bottles in her room.

Dragan Ostojić, president of Golub, a hunting club, in Čitluk, said 140 people came out to look for Brady one day and 170 the next. But it was fruitless, he said. They didn’t have a starting point and they didn’t know where she had been headed. ‘So, more or less, we searched by chance’ he said.

The hunters have had better luck in the past. In December 2002 and then a month later, they stumbled upon the bones of two Austrian pilgrims who had been reported missing in May 2001. The remains of 65-year-old Franz Lechinger, a priest, and 72-year-old Herta Brixler were discovered on Šormanci Hill within sight of a road and houses.

Paths around Međugorje are visible and in good shape, Ostojić said. He doesn’t know what makes people wander off them into featureless, tricky terrain.

On a summer day in 2003, Andrija Ćorić and his 11-year old son Ivan, residents of Međugorje, left the path leading down Apparition Hill to escape from columns of pilgrims moving along the path that day. They took a shortcut.

The boy spotted a cane in a fissure in the rocks, and then a little further, a rucksack— and finally a woman’s body, 40 meters from the path. Police identified her as Hedwig Witek Hotar, another Austrian, and estimated that she’d been lying there, still in her mountain shoes, for more than a year.

‘I have no idea’ the police chief said, ‘what happens that they are found only a year or two later, on places through which hundreds of people pass.’

Ćorić said that finding a body was ‘a matter of chance’ because ‘the police make one round and when they find no one, they go home.’ He said the locals always warn pilgrims what to avoid and which way they should go.

Srećko Bošnjak, a spokesman for the Ministry of Interior of Hercegovina-Neretva Canton, said that none of the pilgrims who have gone missing appears to have been the victims of crime, kidnapping or violence. He said they likely wandered off paths to go to the bathroom or take a break and got confused and lost in rugged terrain. It has taken from 1.5 to 2.5 year for them to be found.

Pathologist Marija Definis Gojanović of Split, who performed autopsies on two of the missing pilgrims, confirmed that he found no signs of violence. But he said the remains were mummified or skeletal, so he could not determine a cause of death.

The role of the church

Friar Ivan Sesar, pastor of Međugorje Parish, said that last year the church installed lights on the way to Apparition Hill. Some people protested, but he said, ‘We must not endanger someone’s life for authenticity’s sake.’

The Parish office for Pilgrim Safety provides information to guests, he said, and makes guides available 24 hours a day for people willing to pay a fee.

But, Sesar said, it’s not only up to the church to insure that guests stay safe. He said travel agencies that bring in pilgrims and municipality authorities are primarily responsible. ‘Nobody is complaining about things that are under our jurisdiction, which is prayer’ he said.

The friar said Međugorje lacks infrastructure a tourist town needs, including sewers. Hotels rely on septic tanks, which can be a danger. The terrain is a special danger that Fatima and Lourdes don’t share, he said, but clearing forest and shrubbery and maintenance trails are all jobs for the municipality.

In Fatima, spokeswoman Simoes said, the National Police of Portugal help patrol around the shrine on holy days that bring in extra heavy crowds. On other days, about 20 guards watch over the shrine and direct visitors who may be lost.

Lourdes spokesman Delahaye said that the southwest French town is very quiet and safe, very different, he said, from ex-Yugoslavia. Security devices and cameras are installed in church buildings against burglary or terrorism, but little else has been seen as necessary.

‘Look’ said Sesar, ‘there is no absolute security in the world today and Međugorje is as safe as any other place in the world where people gather.’

The part of the municipality

Ivo Jerkić, head of Čitluk municipality, said all questions about missing persons and pilgrim safety should be directed to the police.

But he defended the long lag time in finding pilgrims who get lost. ‘You can miss something two meters away. It’s rocks, rockery, shrubs, bushes… If it were urban surroundings, and the police can’t find someone, that would be different.’

Jerkić, who didn’t know of all the disappearances, said, ‘Half a million people come, and I’m not saying it’s normal, but it happens. It just happens.’

He was unaware that Anita Visković from Croatia has not been found since she was last seen near Apparition Hill in August.

‘Here?’ he asked. ‘I didn’t even hear about that case. I have to be honest and say that I’m not familiar with that one. I don’t know where did you get that information?…What did you say her name was, Visković?’

Jerkić, said the municipality would never put up signs and indicators on the trails leading up Apparition Hill without the urging of the Parish.

“It stays as it is,” he said. “Authentic. No construction of any kind. Whoever wants to go takes a vow that he will walk on those rocks. There have been requests to build a gazebo and other stuff, but that would be pure tourism, and not pilgrimage.“

Jerkić said,“I am sorry because this happened. It will create an ugly picture, but on the other hand, it is impossible for this to never happen.“

Alone in Dublin, Stephen Brady can’t believe what has happened.

“You don’t really miss someone until she’s gone,“ he said about the woman he met decades ago in a dance hall then married. “Only now, looking after myself, learning how to cook and shop and do all the domestics…well, everything about her I miss.“