Press officers from the Council of Ministers of Bosnia and Herzegovina (BiH), entity governments, and Brčko District have now spent 5.5 months with hired experts studying the meaning of institutional reputation, crisis communication, and why it is important to pay attention to the media.

These institutions received new or updated communications strategies and have also received new info stalls for promotional and informational material. 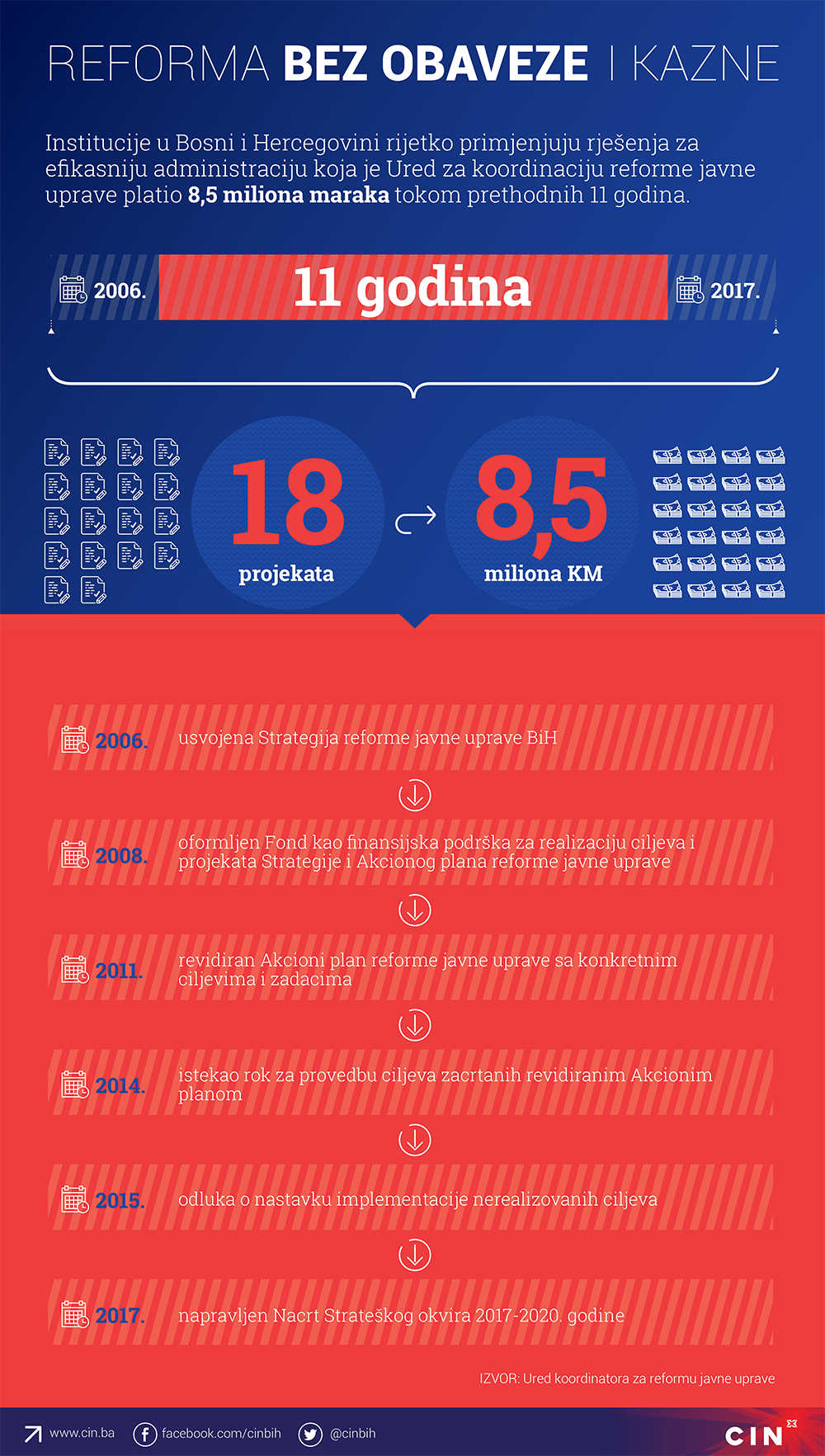 More than 420,000 KM has gone into such projects under the supervision of the Public Administration Reform Coordinator’s Office (PARCO). Donors have paid most of that cost, with the goal in mind of better cooperation with the media and the public.

But some things have not changed for the better. Reporters from the Center for Investigative Reporting in Sarajevo (CIN) have waited in vain for several months for answer to questions about the work of public administration from the BiH Council of Ministers and Brčko District.

PARCO has 15 reform projects – priced at more than 8 million KM – in the works. So far, money has been spent on: creating rule books, strategies and text books; training civil servants; updating software and setting up databases, all of which is supposed to make public administration more efficient.

Governments and institutions must use everything they have learned in PARCO projects because they agreed to the Strategy for the Reform of Public Administration. But, it is a strategy without teeth. There are no sanctions for lack of commitment.

A CIN investigation has found that even the institutions that proposed them have not followed reforms written up in paperwork. Equipment bought to cut costs is not being used on all government levels.

Deadlines for meeting the strategy’s goals should have been met three years ago but have not been. Donors and the public are waiting for improvement in services on which the money has been spent.

Over the past five years, The European Commission has reported little, limited, or no progress in public administration reform in BiH.

According to the World Bank, BiH has the most inefficient administration in Europe.

PARCO has spent more than 1.9 million KM on two projects to train civil servants in use of basic computer software. The work has been paid for out of a fund whose donors include the Swedish International Development Agency (SIDA), the embassies of Denmark, Norway and the Netherlands, the UK Department for International Development, The EU delegation to BiH and local governments.

Civil servants learned about preventing corruption and conflict of interest during a study trip to Slovenia. The training was supposed to improve their overall work and the civil servants were to pass  on to other colleagues what they’d learned. But whether they did and the plan worked is hard to say because civil servants are not being given performance evaluations.

“Not (only) that it is expected of one, but I think that it’s a civil servant’s obligation to use the knowledge and pass it on to his colleagues who were not there, if they do the same or similar jobs,” said Aneta Raić of PARCO which monitors the reform process. “And this is something that contributes to progress.”

Civil servants often show little interest in reform training, even though it is given to them for free.

“People come, they just sign attendance and leave. They use the day to do other things,“ said Muamer Muftić, director of Zamm Media Consulting, a firm that won four contracts for reform projects financed by PARCO.

Muftić’s deputy Amer Boloban said civil servants sometimes don’t even show up for training they have signed up for. “Neither we, nor PARCO down there, or institutions, have any mechanism available to secure the number of participants. “

PARCO’s Raić added, “If the managers behave just like those who have gone through training – and no one holds them accountable for it – then there is no progress.”

State and entity prime ministers and the Brčko mayor have shown no particular interest in the public administration reform. As members of the Coordinating Board for Economic Development and European Integrations, they have an obligation to meet at least twice a year to discuss progress toward reform.

They have not met since the strategy was adopted in 2006. CIN reporters tried to find out why.

The BiH Council of Ministers received the first of many CIN requests more than a year ago but has offered no response. Press officers advised reporters to talk to other government institutions, even though the questions were exclusively about the Council’s obligations on public administration reform.

Still, the head of the Council’s Press and Public Information Department Mirjana Micevska said that thanks to training and other projects, communication with the public is better and more transparent.

Written evaluations completed after trainings have shown that some press officers found the training too theoretical and said that lectures offered only the basic material.

Dragan Močević from Prime Communications in Banja Luka which conducted training, said that civil servants got theory in the form of textbooks, while “everything else was practical”.

The project was to teach the basics of public relations because this job has been done by language professors, lawyers and economists.

Azra Aličković from the Public Relations Department of the BiH Council of Ministers said that she knew some things before the training  “and other things you heard and compared with what you’re doing. I could not tell you that we have significantly changed the way we do work because we did not.”

Močević said that at least one-third of those working in public institutions have not gone through the public relations training. “They did not want to attend…They were only interested if the working meetings were to be held somewhere in the mountains with  a swimming pool and all-inclusive and we did not have that kind of a budget.”

A public relation official at the Ministry for Spatial Planning, Construction and Ecology of the Republika Srpska (RS) Gorjana Rosić said that more than half her colleagues in the RS government have attended trainings involving quality topics and lecturers. “Those who do not attend, usually there’s a crisis situation in the ministry and they cannot attend because of it,” said Rosić.

One project completed in 2011 produced some new and revised rulebooks on the evaluation of civil servants at the state, entity and Brčko District level.  Around 740,000 KM was spent. Project leaders created a textbook with guidelines about which civil servants should be evaluated, how and when. The idea was to reward good workers and to terminate contracts of the bad ones based on objective criteria – in other words, an efficient public administration.

More than 500 evaluators were trained. However, managers doing actual evaluations follow no universal criteria and the exercise seems pro forma.

Merima Nišić has just retired. Until this year, she worked in the House of Peoples in the Federation of BiH (FBiH) Parliament. She said that evaluation in this institution is “a pure formality” and that civil servants just receive a paper with a grading that’s usually the same for all: “Both a person that only attended one session and another one with 10. Completely. Well, there’s no criteria there.”

CIN’s request for evaluation files from the FBiH House of Peoples went unanswered.

Inspectors from the FBiH Ministry of Justice are in charge of overseeing activities of civil servants, but they rarely check if institutions are evaluating staffers. They have several dozen institutions to audit every year and they only manage to do three. Plus, there are no penalties to help improve the system. The worst punishment inspectors can dole out for not abiding by rules is 300 KM.

The situation is similar at the state level – fines are just another 200 KM higher. Even though institutions are required to send their evaluation reports to the BiH Agency for Civil Service (ADS), fewer than half do. According to these reports, most of the civil servants are doing their jobs excellently.

ADS’s general manager Neven Akšamija estimates that only 10 percent of civil servants does their job excellently and deserve the highest grade. However, most receive the highest grade because managers don’t want to anger them. “Most of them do their work fine,” says Akšamija. “The minority…works only so (much) as not to get fired or in some other system they would have been fired.”

No one evaluates senior civil servants. The BiH Council of Ministers has not appointed an evaluation commission.

In the RS, institutions regularly evaluate civil servants and inform the RS Agency for State Management (ADU). ADU officials say that they cannot judge how rigorous the evaluation is.

In the past six years, civil servants in the District of Brčko have not been evaluated. No Rulebook on Evaluation has been adopted.

Projects Without Obligations, Reform Without Strategy

Another document which cost 400,000 KM to put together has not been adopted at all levels. The idea of a draft to introduce changes to the Law on Administrative Review has reached the institutions, but the FBiH government has not adopted it.

Mirsada Jahić, coordinator for public administration reform FBiH, said that some of the recommendations exist under the FBiH law “and we don’t even have to change them.”

Mario Vignjević, program manager for SIDA which has so far invested more than 9 million KM in the Fund for Public Administration Reform, said that he has not been satisfied with how reform is going.

“A lot of money has been invested, and there’s been some progress,” he said. “However, all this is moving slowly, without much enthusiasm to do something.”

Four governments – a state, two entities and Brčko District – yet have to adopt a new strategy for reform 2017-2020. They are more than two years behind on this step which is required for renewed donor investment. So far more than 31.8 million KM has been invested into Public Administration Reform Fund and 29.6 million KM has been spent or pledged on projects.

One other thing PARCO does not do is evaluate the effects of all this expense and projects on BiH.

“There’s not enough people – for example, one person is not enough to carry out an evaluation,” said Raić.