A prestigious group set up to advance research and dole out scarce funds for scientific development paid its members generously, funded their research and paid little attention to how money was spent or what results came from grants.

From 2003-2008, the Sarajevo Canton awarded 158 projects 3.1 million KM. Problems came to light in a report the Ministry of Science and Education sent to the cantonal assembly at the end of last year. It revealed that the ministry could find complete financial reports on only 30 projects.

‘We have no information on how many papers have been published nor do we know how the grants were spent’ said Rifat Škrijelj, an assembly member who also chairs the Biology Department at the School of Mathematics and Natural Sciences (PMF) in Sarajevo. He was outraged enough that in March at his request, the cantonal Ministry of Interior asked prosecutors to investigate.

‘So little is allocated for science, I would say a negligible amount compared to what society needs in the area of science and research, and then for them not to be spent transparently…I consider this a transgression’ he said.

Emir Turkušić, Canton Education and Science Minister in 2003, when a grant-giving group was set up, said Škrijelj is just irate that he applied for but never received a grant.

But Safet Kešo, who took over the post from Turkušić in 2007, has announced an audit to check on spending.

What is evident from Canton records that do exist is that the science group in the beginning was highly supportive of research efforts at one school — PMF.

Over the lifetime of the group, about 22 percent of all research grant money went to that single institution.

Turkušić, who works at PMF as did all but one of the initial members of the group, defends this: ‘I was in a situation where I felt enormous pressure that the call for applications be conducted in a high-quality manner’ he said. ‘I suggested to the government the names in which I could absolutely put my trust into.’

Support for PMF projects continued even as new members came onto the group.

Early on, members agreed that projects they were directing should be ineligible for funding – but they changed their mind. They granted money, records show, to themselves, colleagues and family members. But they say there was no conflict of interest in that.

Member Nenad Tanović, a physicist, said, ‘Following a long discussion we came to another conclusion: that all who are meeting the requirements and had sent their applications, without looking into who their associates were, would get a share of funds.’

He and his wife, physicist Lamija Tanović benefited from that change. In 2003 she was granted 21,000 KM for a project in which he also was a researcher.

Emira Kahrović, head of the PMF Department of Inorganic Chemistry, got a 20,000 KM grant for a project that listed two members of the grant-giving group as co-researchers.

She said the fact that two members of her team got to vote for funding that work was ‘nothing out of the ordinary.’ She said the entire department at PMF not just the two group members were part of the research effort.

Kahrović did submit a final report on her first project to the ministry and published three papers based on her research in internationally recognized journals within two years of completing it as required by terms of the grant. Tanović produced no papers.

In 2004 the science group was designed the Council for Science and it issued two calls for applications in 2005 and 2007. A new three-person sub-commission was set up in each of six scientific areas where awards were to be given. Despite this new structuring, people connected to the group continued to fare well.

In 2005, Seden Kobašlija, a member and a professor at the University of Sarajevo Dental School, got 10,000 KM for a biomedical project. The sub-commission in this field had decided to give that amount to each research applicant who qualified. Kobašlija said he had permission from the full council to apply.

In 2007 Kahrović got 30,000 KM for another project. She said there was nothing wrong with this because she was not part of the decision process to fund her project even though she was a member of natural science sub-commission that awarded the grant. The same group awarded the same amount that year to Turkušić, by now a former minister and member of the council. 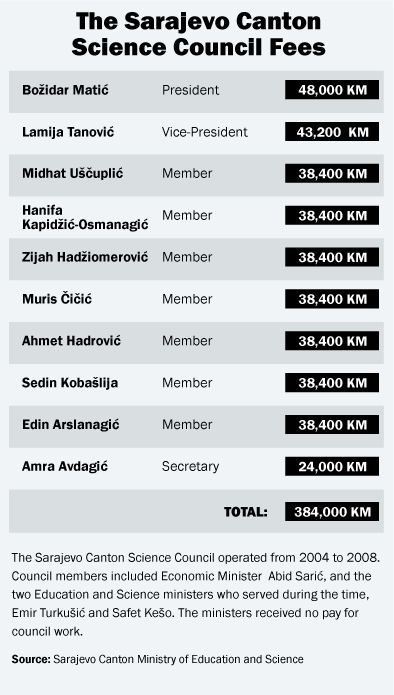 Even members who did not get grant money fared well financially. Records show that the canton spent some 384,000 KM in salaries for 10 people who served on the science grant-giving group from 2004 through 2008. The ministry said it does not have records on salaries paid in 2003.

‘Someone is raising the issue of fees?’ he said. ‘They are hacks. The one who asked that question should submit his or her CC listing from the database.’

Current Contents (CC) is a database that lists the papers of scientists and researchers who meet strict international criteria. A CIN check of the database back to 1998 shows that three of the 10 Science Council members have works listed there.

Matić said he was not distressed by this since members with other obligations shared their opinions on council business in writing and were kept in the loop. Lamija Tanović, said sessions were just a waste of time anyway since most of the group’s real work was done between sessions in evaluating projects.

The ministry does not have the full paperwork to show how and for what the council’s budget was spent. It is unclear why grant beneficiaries had to send final reports and memos on their projects to the ministry rather than to the group that had awarded them grants.

‘Why all that paperwork and assessments didn’t go to the council which was passing the decisions on those projects — that’s something when I’m looking back, that frankly is not clear to me either’ said Kobašlija, a council member.

Nenad Tanović blamed the ministry for having no evaluation system because the group of experts was supposed to simply hand out grants to qualified researchers.

However, Kešo noted, the ministry has no one in charge of science. Turkušić said that lack of money was a problem during his term and had also prevented hiring of a project overseer.

Lack of money kept some of the projects approved in 2007 from getting more than a fraction of the money they had been awarded. In addition no new applications for grant were sought.

But a tangle remains because no one ever enforced a requirement that a financial report on how a grant was spent be filed within a month of completion. The rule was that if money had not been expended as designated, the project leader had to return it.

In 2003 PMF physicist Professor Kenan Surliz got a grant. He never published a paper. He never submitted a report. He says he never started the project because it was not fully funded. He submitted an amended financial on a scaled-down project but then never heard back.

‘And so this money’ he said, ‘is now sitting in the department while the project has never kicked off.’