Six-year old Nedim Ćosović from Sarajevo is wheelchair bound and will need lifelong assistance. The teen suffered brain damage following an inoculation as a child. His, mother Džana refused to inoculate his sister, 5-year-old Lejla.

Statistics show that she is not the only parent making this decision. Fear of immunization is driving some parents to avoid vaccinations.

The rate of inoculation is on decline in Bosnia and Herzegovina (BiH) and that means increased risk of outbreaks of infectious diseases. Some Federation of BiH towns are experiencing an epidemic of measles at the moment. They fear worse.

Health officials advocate immunization, but at the same time they don’t have answers as to why certain complications happen.

Džana Ćosović said that as a 5-month old, her son was inoculated against diphtheria, tetanus, whooping cough, polio and Haemophilus influenza type B, after which he got a fever and cried for 14 hours. “He little by little stopped cooing. I did not know what was going on. The child’s limbs had gone stiff,” she said.

She and the child were placed at the Clinical Center of Sarajevo University (KCUS) where it was determined that the baby was behind in his motor skills. Ćosović said that the imaging showed the changes in Nedim’s brain that looked like “cigarette burns”. After several months of treatment in Sarajevo, the parents took the child to Ljubljana, Slovenia, where doctors diagnosed “a post-vaccination encephalomyelitis,” or a brain inflammation. However, no connection was ever made to establish which vaccine his body reacted.

Three experts interviewed by the Center for Investigative Reporting in Sarajevo (CIN) said that such complications can ensue if a child is allergic to a certain property in the vaccine, or if he has some immune system deficiencies or is genetically predisposed to a vaccination complication.

“This cannot be discovered by a simple check-up,” said Dr. Željko Rončević, president of the BiH Pediatrician’s Association. He said that pediatricians check a child before a vaccination, but this is not sufficient to establish the child’s health statues. Detailed analysis is necessary.

“These are expensive check-ups that we cannot administer to the population as a whole,” said Rončević.

He said that a child should not be vaccinated if he is ill, or has some infection or inflammation. He said that in his nearly 30-year career he saw light, but not grave complications that would lead to disability. The experts say that the usual reactions to a vaccine include temperature, swelling and redness at the point of inoculation or a light rash.

One child in a million, Rončević said, get more serious complications of the sort Nedim was stricken with.

“Nothing is foolproof. I can tell you with 99.9 percent confidence that nothing would happen,” said Rončević.

His colleague Smail Zubčević, the head of neuropediatrics at KCUS, said that post-inoculation disease connected to vaccines are extremely rare.

“Maybe one case in seven to eight years,” said Zubčević. He added that it’s very important that physicians familiarize themselves with the child’s history of hereditary diseases.

Jelica Predojević Samardžić, president of the Republika Srpska (RS) Association of Pediatricians, said that doctors do not have enough time to devote themselves to all patients and to explain parents what kind of vaccines they are giving children and what are normal reactions and the possible grave complications.

“When 30 patients wait in front of the practice, a physician cannot explain every single vaccine to a parent,” said Predojević Samardžić.

A mother of three, Dobrina Kusmuk from Pale, came across such a situation in 2007. She said she was shocked to see her daughter being administered a vaccine in both arms for a disease that was not spreading like an epidemics. Only upon her insistence the doctors explained to her that these were the regular vaccines.

She said that her now 7-year old daughter Mia and a grown son Nikola experienced skin reaction after they received vaccines at an early age. She brought the daughter out of the delivery ward with eczema, while they boy has irritated eyelids.

A vaccine against hepatitis B was the last one that her daughter received in the first year of her life.

Ćosović’s daughter Lejla received shots against tuberculosis and hepatitis B. She said she would continue with vaccinations if they were preceded with an in-depth check-up.

“In Slovenia you have a lab department and the samples of blood and urine are immediately taken from the children,” said Ćosović. She added that children in Slovenia are vaccinated only if the lab results show that their health situation is stable. “They don’t do it here,” she said adding that a simple check-up cannot establish if a child is anemic or has an Escherichia coli. All of this can have an influence on the organism and it’s bad reaction to a vaccine.

The parents of 6 and half year-old Azur Mehanović from Kakanj are also afraid of the vaccines. He was born healthy but today he is bound to a wheelchair. As a month-old baby he received the second dose of hepatitis B vaccine and the complications ensued. His mother Emina said that the boy had stomach spasms, and during the night they could not wake him up. They took him to a nearby clinic in Kakanj, from where he was first transferred to a cantonal hospital in Zenica and later to the Sarajevo Clinical Center.

The parents told CIN that the boy experienced a clinical death while in the hospital; he was in a coma, his kidneys failed and he had blood poisoning. “I though that these things happen only in films,” said Azur’s mother.

Documents from the health institutions show that this was a case of the post-vaccination — the changes started happening after the boy received the vaccination. The child had no hereditary diseases. Hospital officials in Zenica and Sarajevo said they could not talk about patient cases to CIN.

“No physician who respects the ethical code would talk with third parties about the patients,” said Zubčević in a written reply to CIN.

Until they’re 18, children in BiH receive vaccines against 10 illnesses among which are tuberculosis, polio, hepatitis. According to the medical literature, vaccination is necessary to decrease the possibility of infections and to weed out deadly diseases.

For the past two years World Health Organization (WHO) has placed BiH in the category of countries at risk of polio epidemics.

Dr. Rončević said that because of avoidance of vaccination, some diseases thought to be eliminated have been reintroduced in BiH.

Until the end of May, more than 800 persons from around Sarajevo, Central Bosnia, Zenica Doboj and Hercegovina Neretva cantons have contracted measles. According to the FBiH Public Health Bureau, those who have contracted the diseases are mostly non-vaccinated or partly vaccinated persons. Acute measles encephalitis can lead to permanent disability.

“Unfortunately, we had 13 children like this in the FBiH in the post-war period, and this wouldn’t have happened had the children been vaccinated. No one talks about this,” said Zubčević adding that the benefits of immunization in BiH outweigh the risks.

In past years BiH has experienced epidemics of mumps with 16,000 registered cases. The disease for unvaccinated children can lead to swollen ovaries and testicles, inflammation of the pancreas and viral meningitis.

According to the BiH Agency for Drugs and Medical Equipment, which is in charge of vaccination monitoring, 17 cases of complications have been reported in the past five years. The RS Institute for Public Health and the FBiH Bureau for Public Health have also registered common reactions following the vaccination. No complications have been registered.

However, the statistics do not show Azur Mehanović and Nedim Ćosović.

The Mehanovićs say that they do not have money to pay for an expert analysis which would discern the cause of the boy’s disability. “We’re in an extremely difficult financial situation,” said Muamer Mehanović adding that they’re borrowing money for the boy’s medical treatment.

Džana Ćosović said that they have sought donations both for the son’s check-ups and his medical treatment. His first check-up in Ljubljana cost about 7,000 KM, while an hour of Nedim’s therapy costs around 160 KM.

Jagoda Savić, the president of the Association of Parents of Severely Ill Children in BiH, said that an in-depth analysis of post-vaccination complications is needed in order to pinpoint the true cause. However, Dr. Jelena Ravlija, the Head of Epidemiology Department at the FBiH Bureau for Public Health said that the association has never sent the list of children whose causes of disabilities should be investigated. 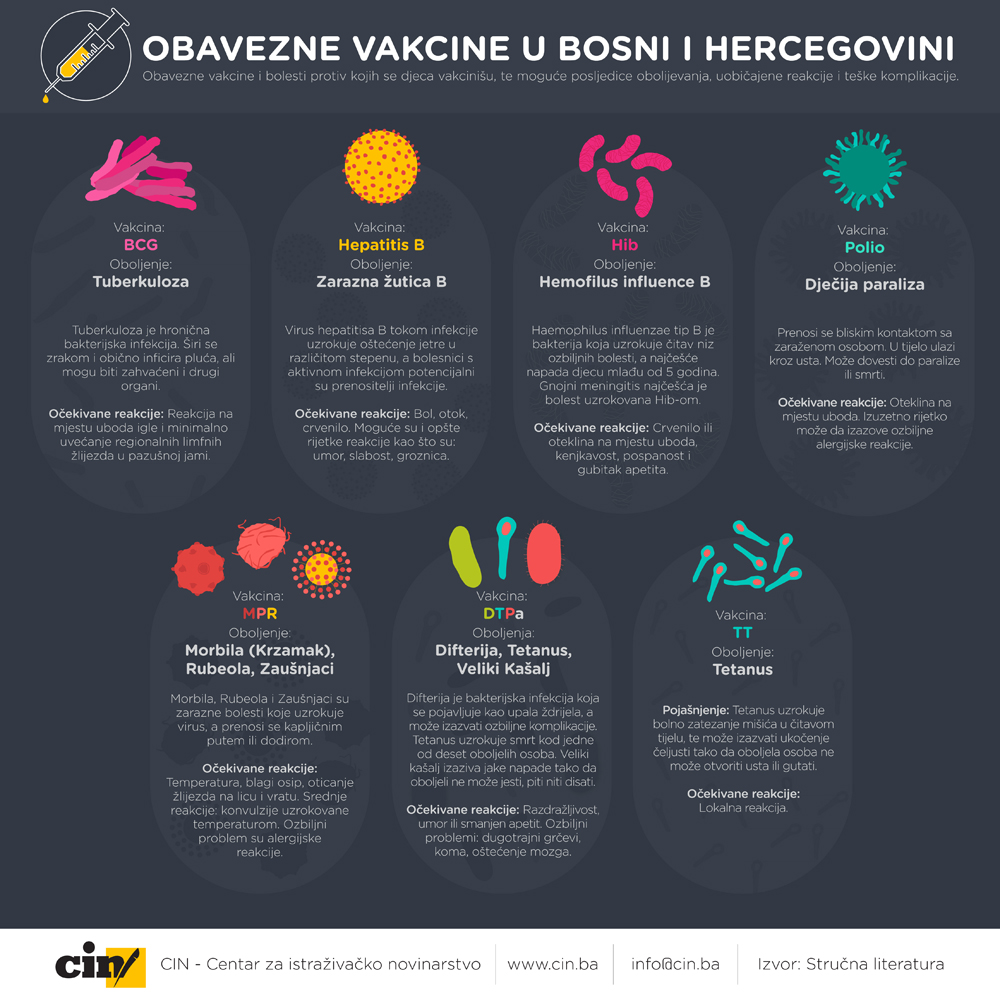 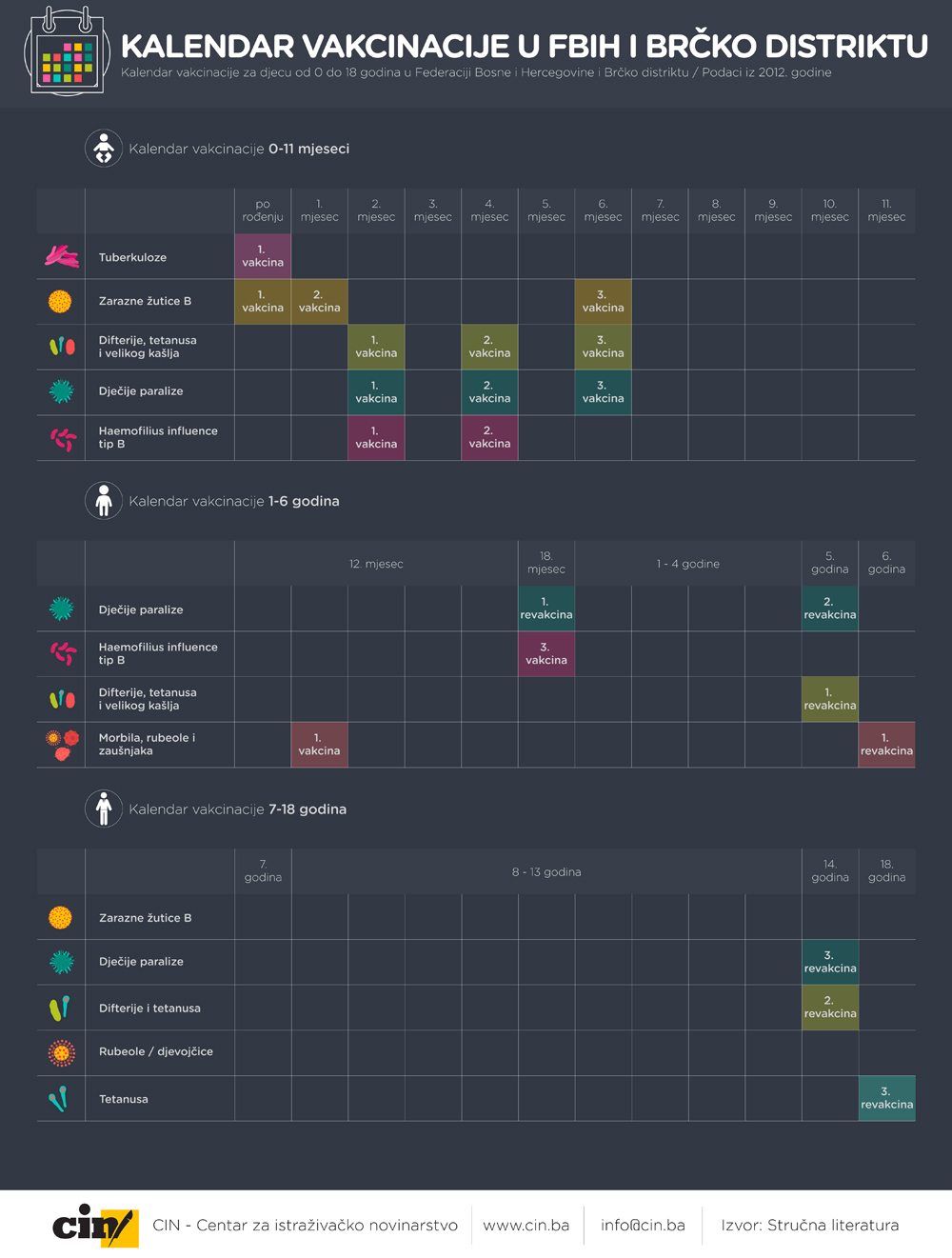 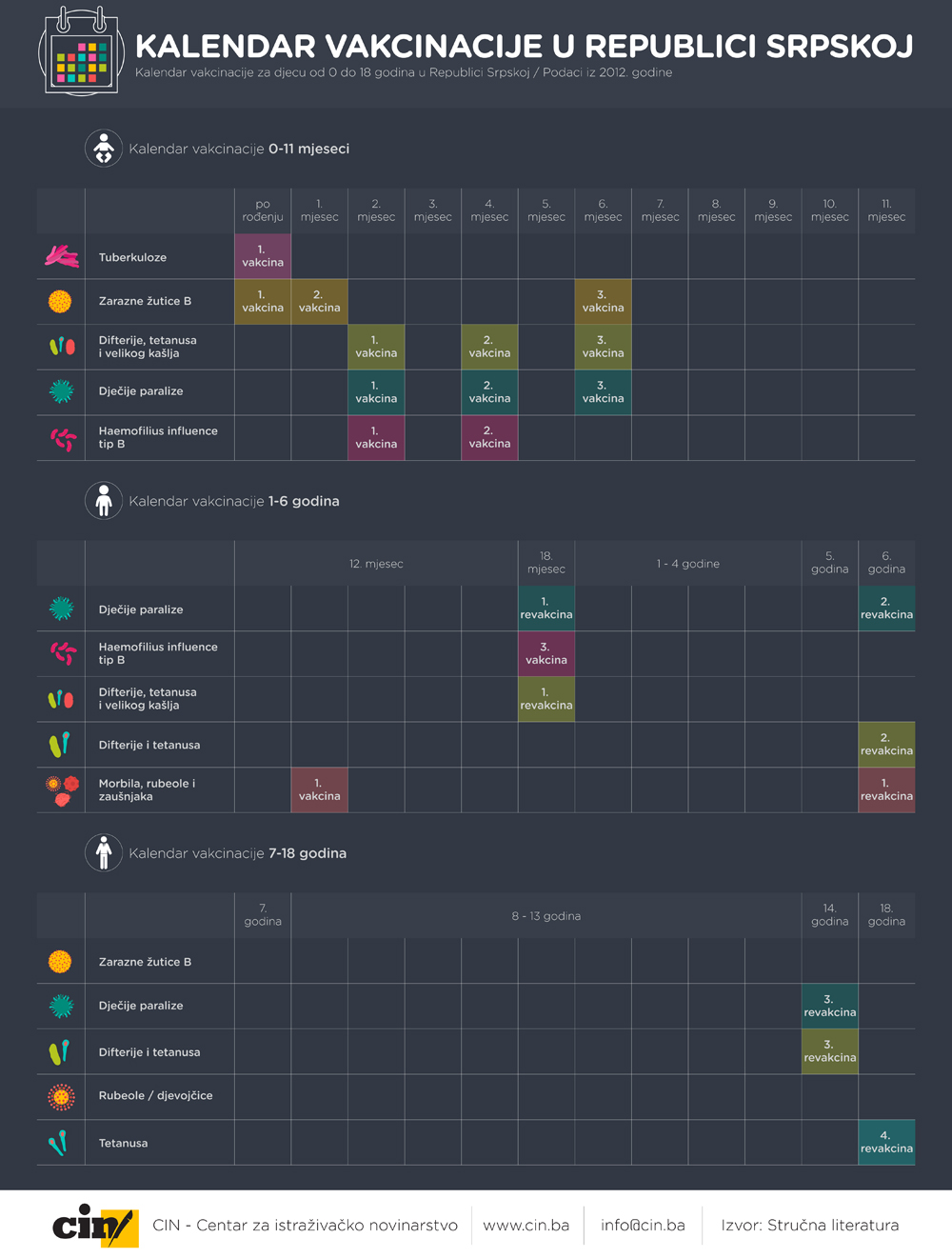 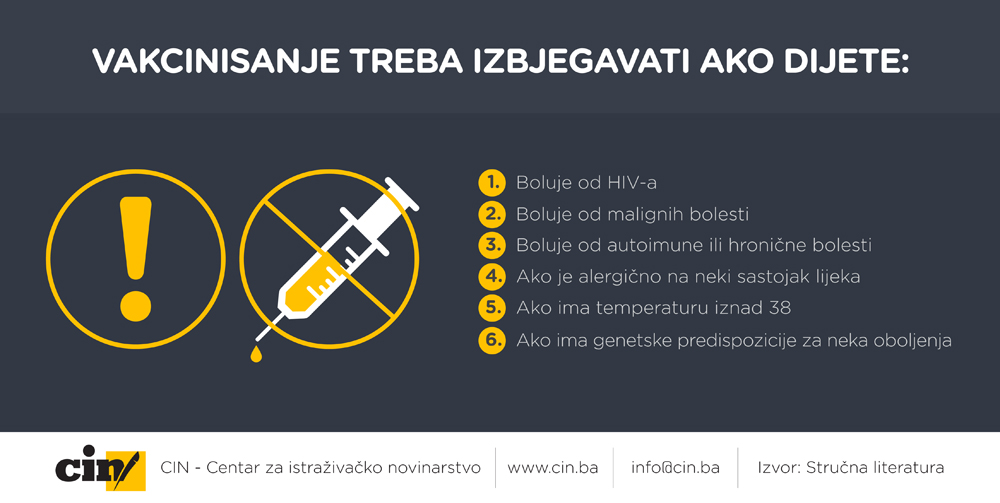 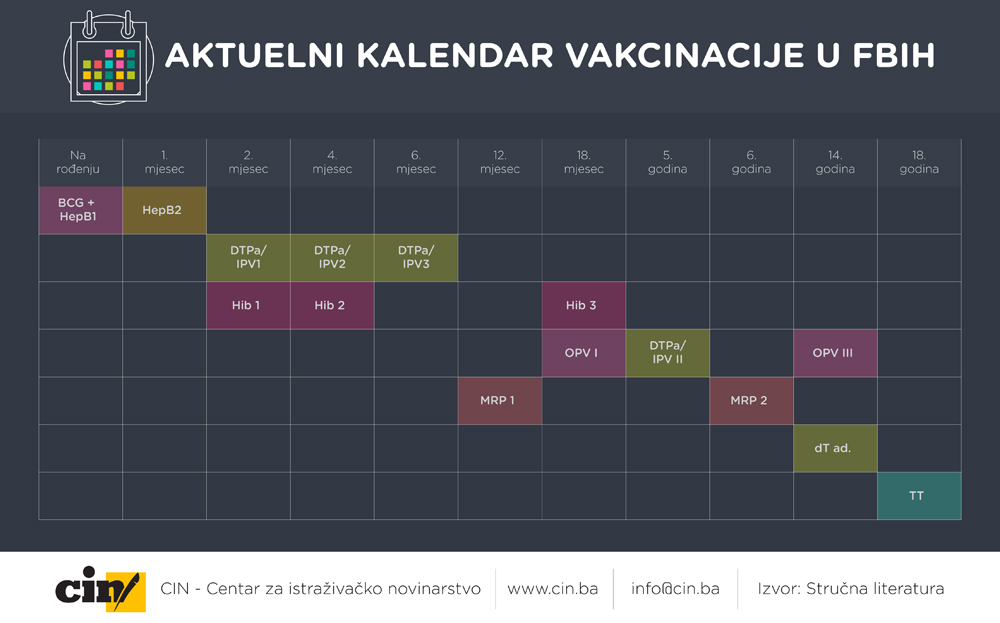 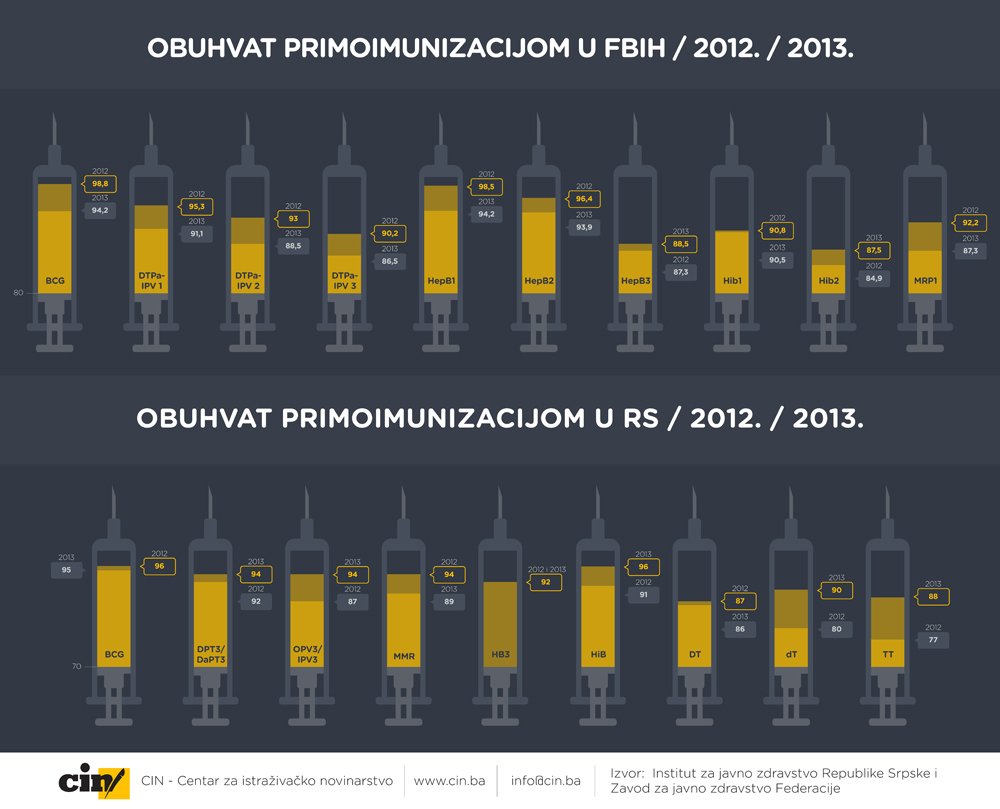