The Secret of Swiss bank account of BiH customs officer

The Jovanović couple from Doboj has bought thirteen properties in the country and abroad while saving about three million marks in a Swiss bank, the Suisse Secrets leak reveals. Janko is the head of the customs branch office, and Jovanka is president of the local court. Their income does not even come close to justify millions of real estate investments. 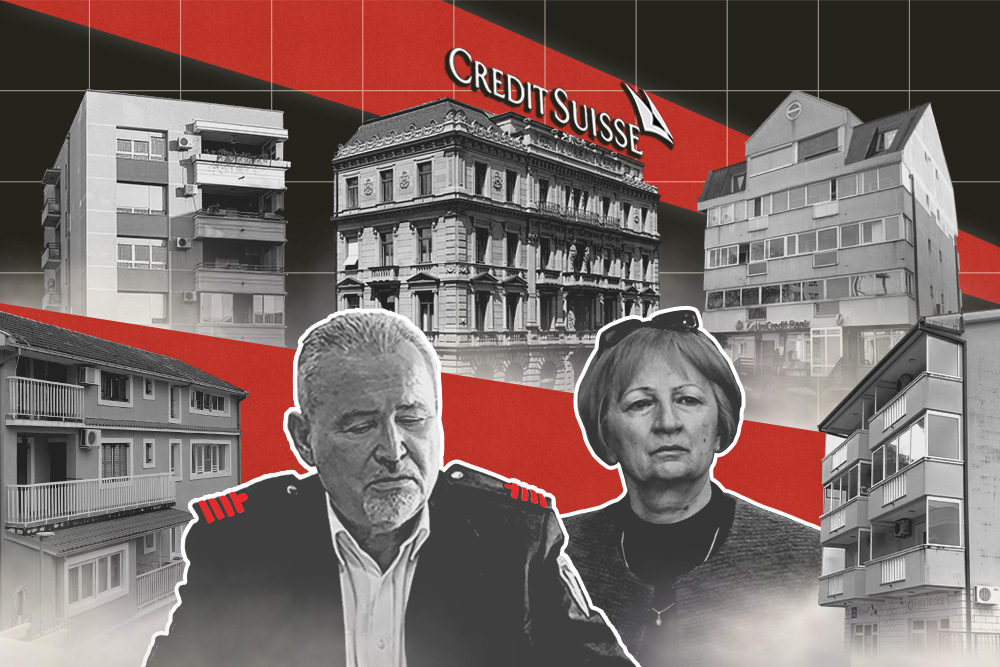 “You can have everything I have in Switzerland! Go, find it!”, said Janko Jovanović, head of the Brod Customs Branch Office, to CIN journalists.

From 1998 to 2010 Jovanović with his wife Jovanka Jovanović, President of the Doboj District Commercial Court, acquired thirteen properties in Bosnia and Herzegovina (BiH), Serbia, and Montenegro worth about BAM 720,000. As CIN and Organized Crime and Corruption Project (OCCRP) learned, at the time of buying the last property, Jovanović opened a bank account in Credit Suisse, which – at one point – was worth about three million marks (cca. CHF 1.6 million).

According to Janko, between 1998 and 2016 he and his wife have earned about BAM 2.3 million, but this was not nearly enough to cover millions of savings and real estate investments.

Jovanović had already been under the scrutiny of competent investigative bodies. In the 2014 operation Pandora, he was arrested on suspicion of irregularities in customs clearance of motor vehicles of European origin. Two years later, the prosecution received a report against him for forging an official document and negligent work in the service, and in 2018 he had to go through disciplinary proceedings for failing to collect customs duties from Unis-Fabrika cijevi from Derventa.

No one yet proved him guilty but new information on his savings abroad, revealed in the Suisse Secrets leaks, could draw the prosecutor’s attention and break the stalemate.

Janko has been working in customs since 1993, and for most of his career, he served as head of the Customs Branch Office in Brod, where he is responsible for import and export control. In May he will turn 65 and qualify for retirement.

Having been the subject of investigations, he learned to be vigilant, so came to the meeting with the journalists prepared. He invited them to the customs office in Brod and brought documents from personal records on income, investments, and expenses. He was prepared to answer every question, but whenever the data would suggest a more significant “digit”, Jovanović would forbid journalists to write about it because, as he says, he does not want to be the target of racketeers in a country where no one can protect him. While wearing a high-ranking civil servant uniform that commands respect, he spoke in slang.

In twelve years, this couple bought two business premises, two plots of land, two flats and two garages in Doboj, two apartments in Herceg Novi, on the Montenegrin coast, and a flat and two garages in the center of Belgrade, Serbia.

In 1998, he bought two plots of land of 260 square meters in total from the Doboj municipality at an auction for less than BAM 55,000. He was not much interested in a smaller plot, so he entered into a partnership with two investors who built a building on this land.

He built two garages, ground floor and first floor on a larger plot of 156 square meters, which he claims have cost him altogether BAM 119,000. He claims to have financed this investment from his own savings, which were “substantial at the time”. After obtaining a permit to build an extension, he entered into a partnership with the Doboj company Simpro, which in 2001 completed the construction of a four-storey residential and business building.

In the new building, he got a 156-sqm business space, which he has been leasing to Unicredit bank since 2003, two garages and two apartments of a total of 123 square meters in which he lived with his wife until 2008. In 2008 they moved to a neighboring building where Jovanka bought two other apartments for BAM 111,938, which they merged into one of 97 square meters.

They turned the old apartments into business premises and leased them to the same bank:  “This idea has paid off for me big-time”, says Jovanović, adding that he has earned more than BAM 1.1 million from the lease.

In addition, the Jovanovićs have another 25-square-meter business space in the center of Doboj, which they lease for BAM 552 a month. Judge Jovanović bought it in 2003 for BAM 35,000.

Describing her husband and herself as responsible and conscientious people, she told journalists that all their real estate was financed from their legal income and that all taxes have been paid.

„You have cast a shadow on the twilight of our careers in a way“, says she.

Jovanka Jovanović has been a judge in Doboj since 1983, She served as president of the Basic Court for six years, and with the establishing of the District Commercial Court in Doboj in 2010, she became the first – and so far, the only – president of this court.

Although the list of the property was already quite long for local circumstances, Jovanović decided to add to his property inventory the most expensive item: he bought two garages and a 56-square-meter flat in the wider center of Belgrade, Serbia in 2010, which he paid in cash he brought out of the country illegally.

To take more than EUR 10,000 across the border, the head of the customs branch, like any other citizen, was required to seek permission from the entity Ministry of Finance, he decided to break the rules, and to this day he sees nothing wrong about it.

“I’m not gonna beg anyone. This way I’ll pay a BAM 100 or 200 fine for FX misdemeanor, and be done with it.  Nobody even initiated a foreign exchange infringement proceedings”, he said to the CIN journalists on the premises of the Customs office.

The Serbian Geodetic Authority denied access to official information about the price Jovanović had to pay for this property in Belgrade, and Jovanović himself also refused to share this information. However, according to the official appraisal of the real estate appraiser, the cost of a flat of the same features in the same place at the time was between BAM 228,000 and 351,000, while the two garages were BAM 70,000.

However, Jovanović kept the most valuable property elsewhere.

Data that appeared in public through the international journalism project Swiss Secrets (author’s note: SwissSecrets) after the “leak” of information shows that he opened an account with Credit Suisse at the time. At the time of his arrest, the charges, and the disciplinary process that followed, Jovanović’s account was worth about three million marks (about CHF 1.6 million), kept safe, away from home, and beyond the reach of investigating authorities.

But he claims he never had an account in Switzerland, and offered to give away his money to journalists if they find any in this country [Switzerland].  “Go, if you find any, come to me to sign  [the deed of donation],” he said.

“I am not at all aware of any such money”, says his wife, Jovanka Jovanović.

The Jovanovićs claim their income can justify their real estate.

According to Janko’s records, from 1998 to 2016, they earned BAM 2.3 million from salaries, leases, and additional income, whereas their annual costs are around BAM 40,000. It is unclear from which sources they financed investments worth a total of BAM 3.7 million.

Janko Jovanović has been a person of interest to investigative agencies and the Prosecutor’s Office of BiH for years, but no one yet proved him guilty.

In the 2014 operation Pandora, he was arrested together with other 42 people. The operation was launched by the State Prosecutor’s Office due to corruption and embezzlement in the import and customs clearance of various goods. He was released after 27 days in custody, and the investigation is still being formally conducted, although he claims not to have been summoned for interviews anymore.

Two years later, the Regulation Enforcement Department of ITABiH filed a criminal report to the BiH Prosecutor’s Office, naming Jovanović as an officer who in 2006 had been entering incorrect data in the Registry of vehicles using the customs terminal in Brod. According to the report, he thus enabled the owner of the terminal to retain unjustifiably BAM 163,000.

Then, in 2018, disciplinary proceedings were initiated against him for failing to control and collect duties on the company Unis-Fabrika cijevi a.d. from Derventa. Based on the first decision of the ITABIH disciplinary board, he was demoted for a period of one year. Following his appeal, his sentence was commuted to a 30% pay cut for a period of six months.

This prompted Jovanović to file a lawsuit against his employer, in which the Court of BiH ruled that the ITABiH had no grounds to sanction him. The ITABiH had to return to him BAM 3,438 and pay the legal expenses.

Mirko Džakula, director of the ITABiH is convinced that the investigative authorities should have determined the origin of Jovanović’s money.  “However, when it comes to him [Jovanović], we have never received any [report] from anyone about him having any illegal [property].”

To journalist’s comment about him being often under the investigations, Jovanović confidently replied:

SuisseSecrets is a collaborative journalism project based on leaked bank account data provided by an anonymous source to German newspaper Süddeutsche Zeitung, which shared it with 48 media partners around the world. Reporters on five continents combed through thousands of bank records and interviewed insiders, regulators, and criminal prosecutors, as well as digging into court records and financial disclosures to corroborate their findings. The data covers over 18,000 accounts that were open from the 1940s until well into the last decade. Together, they held funds worth more than BAM 170 billion.

“I believe that Swiss banking secrecy laws are immoral,” the whistleblower said in a statement. “The pretext of protecting financial privacy is merely a fig leaf covering the shameful role of Swiss banks as collaborators of tax evaders. This situation enables corruption and starves developing countries of much-needed tax revenue. These countries are the ones that therefore suffer most from Switzerland’s reverse-Robin-Hood stunt.”

A massive leak from one of the world’s biggest private banks has revealed that its bank accounts have been used by war criminals, human traffickers, drug lords, corrupt leaders, fraudsters, and other serious criminals. 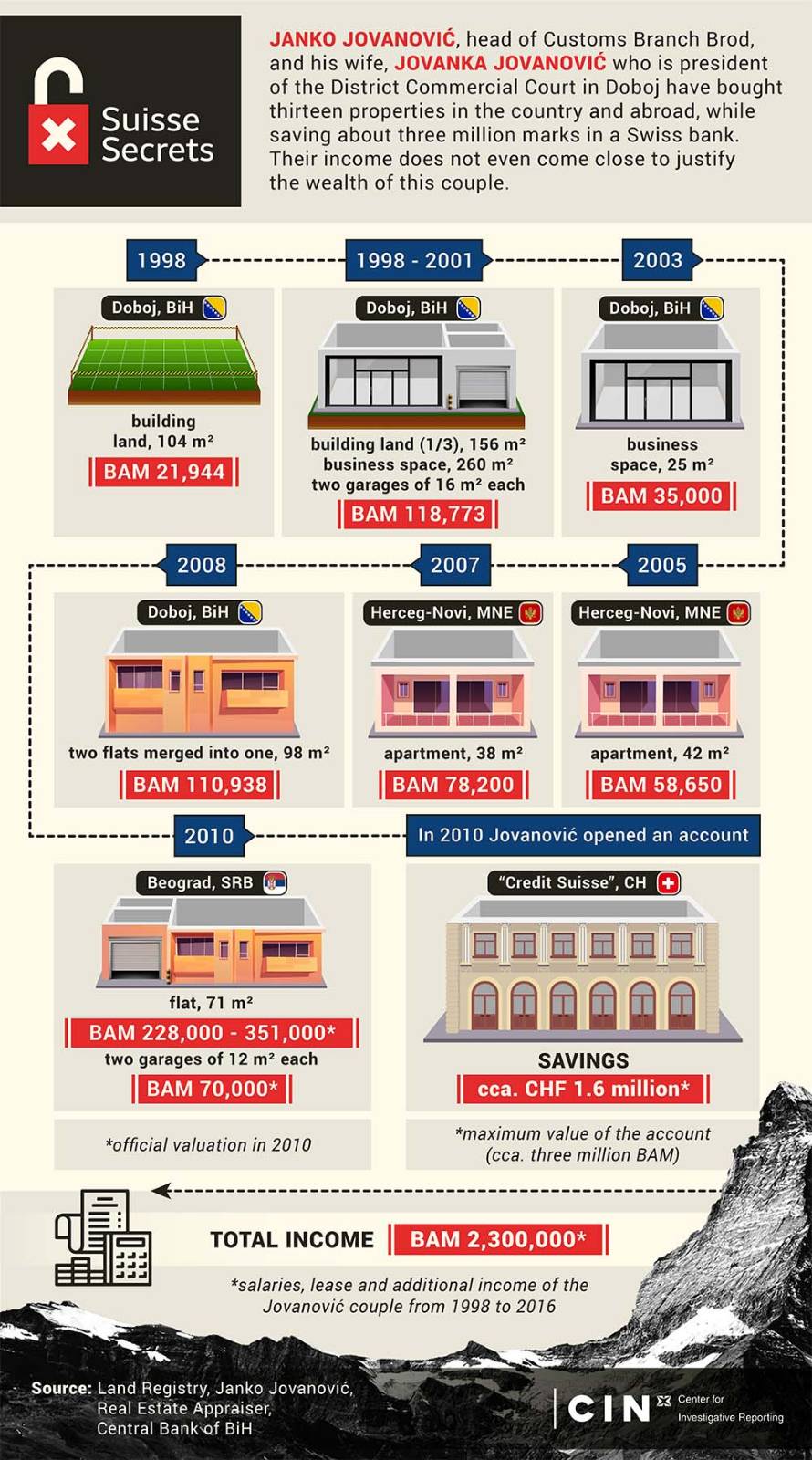