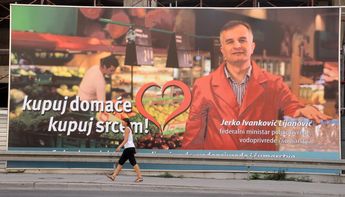 Transparency International of Bosnia and Herzegovina (TI BiH) asked today the Federation Ministry of Agriculture Jerko Ivanković Lijanović to resign because the party which he leads has been fined because of using the government campaign “Buy Local” for its election promotion.

The Central Electoral Commission (CIK) BiH fined yesterday the People’s Party Through Work to Betterment (NSRZB) with 10,000 KM. According to CIK’s explanation, the party violated the BiH Election Law’s Code of Conduct which stipulates that the public election campaign cannot begin thirty days before the elections.

Because of the abuse of funds and the abuse of office, TI BiH filed a complaint with CIK in September, according to the NGo’s press release.

In the beginning of August—two months before the election day—the Center for Investigative Reporting (CIN) in Sarajevo reported LINK that the emblems and slogans similar to those used by the Through Work to Betterment party are used in the campaign in which the minister Lijanović calls on the population to buy local products.

The Ministry of Agriculture in its campaign used the slogan “Buy Local – Buy with Heart” which recalls the slogan “With Heart for Betterment”. Both the party and the campaign use the heart theme.

CIN reporters have also found that three members of the party—Suad Čamdžić, Ana Bašić and Vedad Gačanović—were on the commission which chose a firm to conduct the “Buy Local – Buy with Heart” campaign! The Federation of BiH taxpayers shouldered 672,000 KM that the campaign has cost.

After the beginning of the election campaign CIN reporterd that the party has displayed its posters next to the campaigns’ billboards in several BiH towns including Sarajevo.