Up in a Puff of Smoke

Traditional tobacco cultivation in Herzegovina is on the path towards extinction. Local farmers blame their problems on tobacco smuggling and corruption, but changing tastes are playing a large role as well. 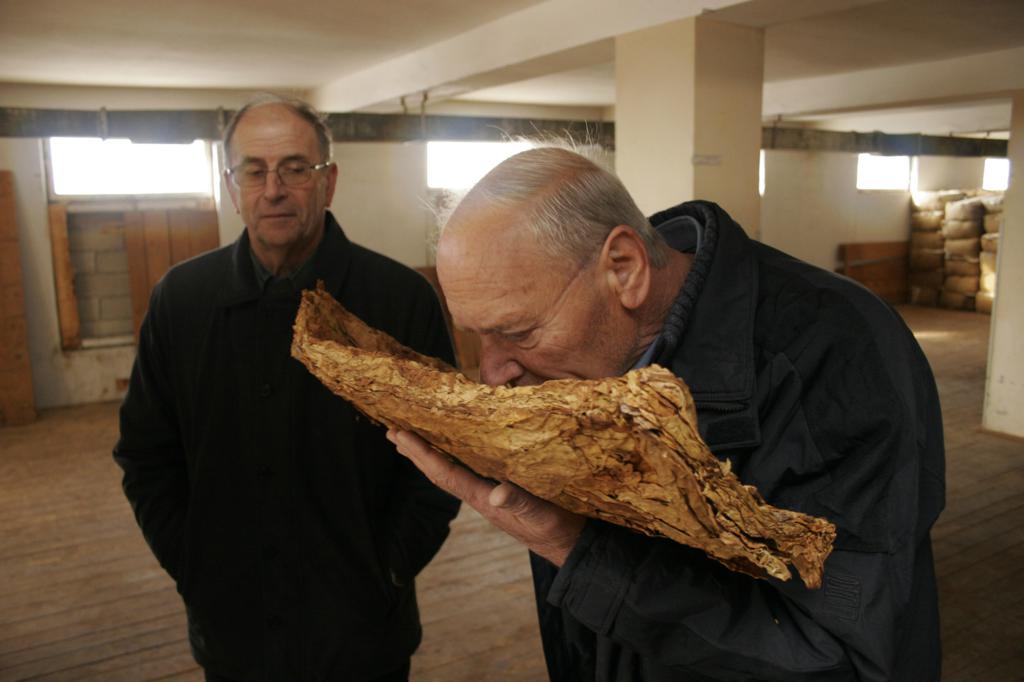 Like other boys in this area, 24-year-old Igor Palac of Višnjice near Grude remembers getting up at dawn to pick and string together the leaves of Ravnjak tobacco before the midday heat settled in. The Palacs had grown this traditional type of strong Herzegovinian tobacco until about 10 years ago, but now they run a roadside car scrap yard in Višnjice. Growing tobacco just doesn’t pay anymore, they say.

‘Cigarette smuggling destroyed us. Tobacco went belly up a good while ago’ says Palac.

According to the World Health Organization, more than 35 percent of all cigarettes smoked in Bosnia and Herzegovina (BiH) are smuggled or illegally made.

Smuggling is a huge problem, but it is not the only one tobacco growers face.

Croatian cigarette manufacturers pay no excise fees when they sell in BiH, making their cigarettes cheaper than those of locally produced tobacco. Meanwhile, Croatia doesn’t return the favor. It charges importers of Bosnian cigarettes 2.5 KM per pack because they do not contain Croatian tobacco.

Meanwhile, local brands are moving away from the traditional tobacco, which has a harsher taste and is high in tar and nicotine. Local brands are being reformulated with imported tobacco to match their smoother international competitors.

Growers are dying out, while half of Bosnia’s manufacturers have gone out of business.

Tobacco has been grown in BiH since it was part of the Austro-Hungarian monarchy. But director general Blago Markota, 67, and general manager Stjepan Miličević, 68, of Co-op Agroplod from Čitluk, predict it will die out in the next three years.

The only plants left, they say, will be the occasional leaf grown in someone’s backyard as a reminder of the recent past when many families in Čapljina, Stolac, Čitluk, Grude and Široki Brijeg made a living by cultivating this aromatic plant. Instead, where tobacco once grew, farmers cultivate plants such as new potatoes and grapes – agricultural products that are more easily marketed here.

The co-op, after buying tobacco for 45 years, has decided to quit the business. They are now buying grapes for making medicinal wine and grappa.

They are still stuck with 200 tons of tobacco picked in 2004 and 2005 in Herzegovina piled in neat stacks of yellow leaves. They have yet to sell it as expected to the Tobacco Factory Sarajevo (FDS), which currently owes farmers around 136.000 KM.

The weather conditions in Herzegovina favor the Ravnjak tobacco, but not the more popular American varieties including Virginia and Burley. Local cigarette brands such as Drina are the only ones that still use Ravnjak.

Ravnjak is dying out, says an official at FDS.

Ravnjak doesn’t fit well in the formulas for contemporary light cigarettes and FDS is the only factory in the world that still uses it for cigarettes, said Orhan Robović, head of FDS’s department of quality standards.

Robović said local tobacco was simply outdated – like a mechanical typewriter compared to new computers. He would not say how the company was using Ravnjak because actual cigarette recipes are a trade secret.

Drina still has a respectable market share of about 30 percent of the market, but FDS has failed to develop an export market for the brand.

Other local factories in Mostar and Čapljina have closed due to competitive markets, smuggling and corruption in management. According to the Federation BiH (FBiH) Financial Police, the Mostar factory was selling cigarettes at 25 percent below the cost of production to companies in Cyprus controlled by indicted Montenegrin businessman Stanko Subotić aka ‘Cane’.

The corruption hurt their ability to stay in business. The plant is shutdown now and officials hope to privatize it, although it has not attracted much interest.

The Banka Luka factory was privatized to Antonić Trade, a Laktaši company and a Rovinj distributor. The Banja Luka factory has produced few cigarettes. The owner, Nebojša Antonić, received a loan from Rovinj equal to the purchase price of the privatized factory just before the sale.

That leaves farmers reliant on one company, FDS, and only a few co-ops continue to buy for their reduced needs. FDS is not capable of purchasing an entire harvest and has decreased the quotas it buys from local producers in Herzegovina, buyers say.

Farmers who have been able to sell their harvest can earn 10,000 from the sale of dry leaves a year, but a third of this sum goes towards growing costs.

Data from the Statistical Agency of BiH for 1999 to 2006 show that tobacco production in the FBiH has fallen roughly by half. In the north of the country in Posavina, the climate permits tobacco growers to grow the more popular American types of tobacco such as Virginia and Burley. Production has been small but constant from 2004 and 2007, said Ignjo Babić, President of the Tobacco Farmers and Producers with the FBiH Chamber of Commerce and the director of tobacco buyer Duhan Gradačac.

The association warned the FBiH government in a letter sent in November of last year that there was a danger Herzegovina tobacco production would completely die out.

Babić said that Bosnian politicians have favored the status quo, which works in the favor of foreign tobacco producers, trading lobbies of Bosnian importers and smugglers.

Babić said the tax laws allow Croatian cigarettes to be imported into BiH in huge numbers, some 85 million KM in 2007, and sold for much cheaper than they are sold in Croatia. Croatia accounts for two thirds of the value of all cigarettes imported to BiH.

Some of those imported Croatian cigarettes are then smuggled back into Croatia and sold for a profit. An examination of police records shows that Rovinj-made Ronhill cigarettes are often confiscated from smugglers either at the Montenegrin border with Bosnia or at the Bosnian Croatian border.

Meanwhile, the laws in Croatia have made BiH exports almost non-existent – a miniscule few hundred kilograms of cigarettes last year. Croatia has high excise taxes, but lowers them for companies who use Croatian-grown tobacco, thus protecting their domestic farmers.

If a Bosnian tobacco manufacturer wanted to export its products to Croatia, it would have to meet very strict quality regulations and standards, and would have to pay around 2.5 KM per pack in excise levies alone.

Croatian manufacturers pay little for exporting to BiH and have no requirements to meet for locally produced tobacco. The retail price of Croatian Ronhill in BiH is 2 KM, while the same pack would cost almost twice that in Croatia.

‘So, it even pays off for them to pay taxes here while keeping the cigarettes in Croatia’ says Babić.

The people who lose out are the farmers. Once there were 40 families who made a living selling tobacco in Bijelo Polje near Mostar. Today there are only five families who grow tobacco.

Ljudevit Zadro, 69, of Višnjice, says he will not stop cultivating the plant, even if it’s only for his family’s own needs. Zadro and his wife Iva have raised their five children with their earnings from tobacco, but there is no one to continue their family’s 100-year old tradition of cultivation. Their son Ivica, who works as a police officer in Grude, is the only sibling who stayed. Their other children now live in Chicago, Toronto and Zagreb.

Zadro, who has been stringing up yellow leaves since he was six years old, says tobacco used to be profitable before the war. In the 1970s, men and women from the area would leave their jobs in Germany to come back home to grow tobacco. Before the war, Zadro used to grow 50,000 stacks of tobacco. This year he will grow a fifth of that.

Zadro blames Bosnia’s current politicians, he said, who have sided with importers of foreign cigarettes at the expense of local tobacco pickers and manufacturers, and destroyed another old Bosnian tradition.