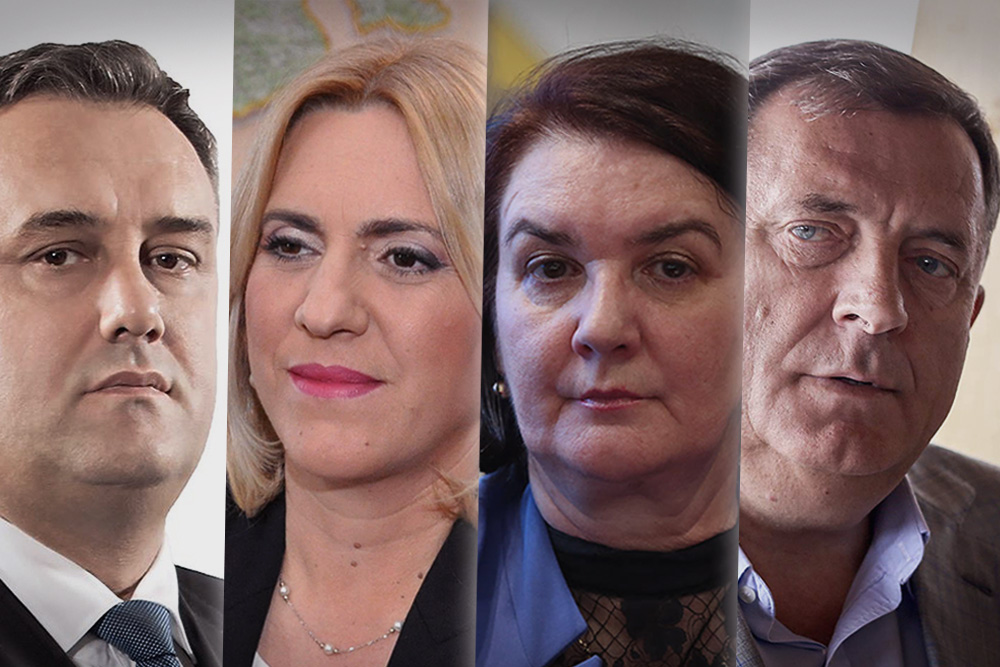 Milorad Dodik, member of the Presidency of Bosnia and Herzegovina (BiH), and Željka Cvijanović, president of the Republika Srpska (RS), are “deliberately undermining the hard-won peace”, said the UK statement as one of the explanations for imposing sanctions on these politicians.

They were sanctioned for undermining the legitimacy and functioning of BiH. Dodik is also considered responsible for blocking the work of the State Parliament, calling for a boycott of RS political representatives, spreading “dangerous and nationalist rhetoric” and inciting ethical hatred. Cvijanović is considered responsible for the attempted transfer of the state property to the entity and the “public glorification of war criminals and denial of the Srebrenica genocide”.

“I reject everything that has been said here in these allegations,” Cvijanović said at a press conference.

Asim Sarajlić, a delegate to the House of Peoples of the BiH Parliamentary Assembly, and Gordana Tadić, former Chief Prosecutor of the BiH Prosecutor’s Office were sanctioned by the United States for abusing their official positions, influence peddling, accepting bribes, and undermining the democratic process in BiH.

Sarajlić and Tadić were banned from entering the United States and using or accessing any assets they may have in this country. The UK imposed the same ban on Cvijanović and Dodik.

Commenting on the second batch of sanctions imposed on him this year, the president of the SNSD [Alliance of Independent Social Democrats] announced a new boycott, this time against the British ambassador to BiH. “How miserable Bosnia and Herzegovina is to defend itself in this way. As far as I am concerned, I’m glad that I no longer have to deal with these ambassadors from the UK” Dodik said at a press conference.

This member of the Presidency is still under US sanctions imposed on him at the beginning of the year due to corrupt activities that led to the accumulation of personal wealth and undermining of the country’s stability. Due to the controversial purchase of a villa in Belgrade, he was recently interrogated by the State Prosecutor’s Office. In 2009, the Center for Investigative Reporting (CIN) wrote about how Dodik had to pay for the villa to register his title deed, but he was granted a loan for its purchase only eight months later.

Before taking office in the Presidency, Dodik submitted an asset declaration to the Central Election Commission (CEC) estimating the value of his property at BAM 2.1 million. He owns an apartment and a house in BiH, worth BAM 380,000, and a villa in Belgrade, which he estimated at BAM 1.7 million. Dodik stated that he leases the villa, but failed to indicate the income he generates on this ground. His wife owns property worth more than BAM 200,000, and the son and daughter are the owners and co-owners of six companies that Dodik failed to mention in the last asset declaration.

Cvijanović estimated her and her husband’s property at almost BAM 750 thousand. This couple has a house in Banja Luka worth more than BAM 446,000. Her husband also inherited land in Prnjavor, and with his son Stefan, he is a co-owner of the company “Prim”, which is engaged in the wholesale of chemical products. Stefan is the founder of the business consulting company “Beta inovatic”, while his brother Filip is a co-owner of the construction company “Pilon”.

There is an ongoing court case against Asim Sarajlić, a delegate in the House of Peoples of the Parliamentary Assembly of BiH, for giving bribes. Sarajlić is charged with being a participant in the audio recording made in March 2020 that calls into question the regularity of the elections for the leadership of the Cantonal Board of the Party of Democratic Action in Sarajevo. The recording tells about the agreement on the “purchase” of one of the delegates in the internal party elections, which was agreed upon by Sarajlić. In the same month, he resigned as Vice President of the Party of which he has been a member since 1990.

During his political career, Sarajlić was the mayor of Vogošća from 2004 to 2010. After that, he was twice appointed a member of the State Parliament, and in 2018 he was appointed a delegate in the House of Peoples. During his political career, the property of this politician also increased. In the asset declaration submitted to the CEC in 2004, Sarajlić reported that he owned shares estimated at BAM  21,000, and in the 2018 asset declaration the value of his property is estimated to be slightly more than BAM 432,000. He owns a 131 square meter apartment in Sarajevo, two garages, and inherited land and a quarter of the family house. He also owns an apartment on Bjelašnica. He drives an Audi worth BAM 120,000.

In addition to Sarajlić, the United States also sanctioned former Chief Prosecutor of the State Prosecutorćs Office, Mrs. Gordana Tadić. She was sanctioned for using her influence to interfere with judicial processes and manipulate cases to protect political patrons from prosecution. A statement from the US Embassy said Tadić was responsible for “undermining democratic processes” in the country because, among other things, she failed to assign cases to prosecutors through an automated case distribution system and for using her position to promote her own personal and familial interests, and collecting state housing fees for an apartment in which she never resided.

Tadić inherited a family house in Živinice, which she shares with her sister, while her husband Slavko owns a house and land in the same town. Her son Tomislav lives in Sarajevo in an apartment bought in 2013, worth BAM 80,000.

Tadić was the Chief prosecutor from 2019 to 2021 when she was removed from that position and appointed prosecutor.

Tadić and Sarajlić did not answer a phone call from a CIN reporter.