The Bosnia and Herzegovina (BiH) Football Association is under fire for massive tax debt, mishandling money, failing to attract and retain good players and not developing its Premier League teams.

Failure to pay more than 2.2 million KM in taxes and mishandling association funds have resulted in the ongoing trial of the association”s secretary general, Munib Ušanović, and its secretary of finance, Miodrag Kureš, for tax evasion and abuse of office.

As a result of the tax debt, the association, in a recent agreement with the government, mortgaged its property and must pay more than 3 million KM—including interest on the past-due amount—or lose all of its property. The tax office confirmed this arrangement.

Critics also point out that the association tolerates the presence of men with criminal records or legal problems among its leadership.

One example is the director of the association”s licensing department, Talat Sulejmani, who was indicted in one previous job, and has been questioned by police about another.

Another is Hamdija “Tiger” Abdić, a war-time commander and member of the executive board, who said he brought in a friend, Miroslav “Ćiro” Blažević, to be the new coach after the popular Meho Kodro and his assistant were sacked because they refused bow down to the executive board, has been convicted of violent crimes.

Ušanović, Kureša and Sulejmani remain on trial but have kept their positions. Abdić remains free on a suspended felony sentence and continues to serve on the executive board despite an internal rule that bars anyone convicted of a felony from occupying such a post. Abdić said he was “not familiar” with the rule, but expressed no intention to resign.

The atmosphere in the football world, said Mensur Dogan, president of the Sarajevo Canton Association of Football Coaches, is “like the Wild West, and that suits the people there because they can work when there is anarchy. Such people do not like a working system.”

The 94-page indictment against Ušanović and Kureša, supported by an expert”s report, found missing funds and disorder in association accounting. It showed that the association failed to pay Federation of BiH (FBiH) and BiH taxes and fees between 2001 and 2005 and through September 2006.

The money owed — back taxes and unpaid employee benefits such as health and welfare — is not the only sum that Ušanović and Kureša have been found to have mishandled. In that period, the association paid, without documentation, more than 450,000 KM. Some of it went to Ušanović, to Kureša, to the national team coach at the time, and to other officials.

Critics, including members of fan clubs, complain that too many in the association have been in legal trouble.

Among the more prominent critics are the BH Fanaticos, the largest organized group of national team fans. A former leader of the group, Davor Ademović, said, “It is being led by people who don”t want good for this country and who will never lead us onto the right path.”

Another Fanaticos leader, Nizar Al-Tinawi, said some association officials operate with impunity. He said fans should boycott games to pressure the group into purging its ranks and improving its record. “Really, no one can touch them. They have their ring. Get this: we change Kodro (the popular coach who was fired) but don”t touch the guy who is on trial for embezzling or mishandling 2 million KM.”

How did it get this way?

The structure of football in BiH does not favor experience in the sport or in managing a football association, as many other associations do.

Although the association is registered as a citizens” group and is considered public, it claims it has no responsibility to account to the public, although its failure to pay taxes directly affects taxpayers.

The indictment and report in the case of Ušanović and Kureša show that the association made between 263,766KM and 912,047KM each year from 2001 to 2005. The average taxable revenue was about 660,650 KM a year. During that time, the association failed to pay 306,477 KM in taxes. Ušanović, after dodging interviews for months, finally spoke publicly and admitted the tax shortfall. 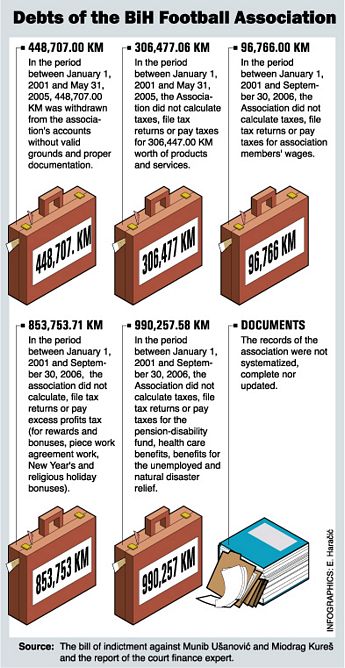 The expert witness, Kerima Prašljivić, reported that the association at first resisted providing records. She would not agree to an interview, saying that her report contained her findings. She did say that the bookkeeping was the worst she had seen in 20 years of such audits.

Asked in June for records, Ušanović said that the association was under no obligation to send records and asked reporters if they would have sent such records to him. Asked recently for financial records when he was interviewed, he said the association would not release them because they contained personal information.

Financial records would show whether the association has changed the practices, it has been criticized for in court, and whether it now accounts for expenditures and pays benefits as required.

In the complaint about association leaders with legal problems, a look at criminal files turns up a number of names.

The presence of individuals with records has hurt the image of football here, said Fuad Kasumović, deputy minister of finances and treasury of BiH.

After he publicly upbraided association officials in August 2005 over what he said was match-fixing, Kasumović was suspended from the presidency of Zenica”s Čelik club.

“It”s a public secret,” he said about association leaders with records. “Even the children on the street are in on this, that people in the association are not up to the job. And look, there are the ongoing trial hearings, all of which create a tarnished image of BiH and its football.”

One of those with a criminal history is Abdić, who remains in his position despite convictions for robbery and felonious assault, as well as other instances of violent behavior, including brawls.

His most serious offense, and the one for which he has received a sentence, involved robbery and assault. In October 2007, Supreme Court upheld his conviction. Both he and Emin Pivić were convicted on charges that they beat and kicked Nedžad Bajrić in an attempt to extort 200,000 DEM. When he refused, Pivić shot him. They left him wounded, and took his car and other valuables.

Abdić, in an interview in his hometown of Bihać, claimed he was innocent, that he didn”t start fights and that his convictions were engineered by enemies. He said postponements for reason of illness would keep him out of jail.

He acknowledged that he had been in many brawls. He said, “My children are not the children of a criminal, but of a war hero.”

Another executive board member with legal problems is Miroslav Ćorić, who was arrested on organized crime charges May 22, 2007 for irregularities in the Herzegovina- Neretva Canton, where he was prime minister. Among the many charges was that he paid 741,000 KM to former police officers who had not been licensed to work as police.

Judge Salem Miso ruled that there was insubstantial evidence for the organized crime charges and Ćorić was indicted for abusing his authority for the benefit of associates. Regarding the charge involving former officers, he said he did so because he thought it would not be wise to leave a group of armed and trained men out on street with no means of support. His trial has been temporarily postponed.

Another Herzegovina-Neretva representative on the executive board, Samir Ćemalović, is on a list of those suspected of illegal trade in narcotics and cars according to MUP, but he has not been charged.

The official in charge of licensing, Sulejmani, has problems as well. He was indicted for his work as head of Air Bosnia”s Istanbul office between 1999 and 2001. Sulejmani was indicted for violating the rules on refunds for unused airplane fares, costing the company $1,334,491. His trial is ongoing.

Sulejmani said he also gave a statement to police about illegal Bosnian citizenships distributed through Bosnian embassies and consulates, including the BiH consular office in Turkey, where he worked from 1994 till 1998. He said that there were no irregularities.

The trial for Munib Ušanović and Miodraga Kureš drags on, although the association recently signed a deal with the tax office to repay the money it owes FBiH over the next five years.

Ušanović has reapplied to the association secretary general.

The tax office confirmed the arrangement for the association to pay its tax debt in 60 installments. If it fails to pay, the association could lose its headquarters on Ferhadija.