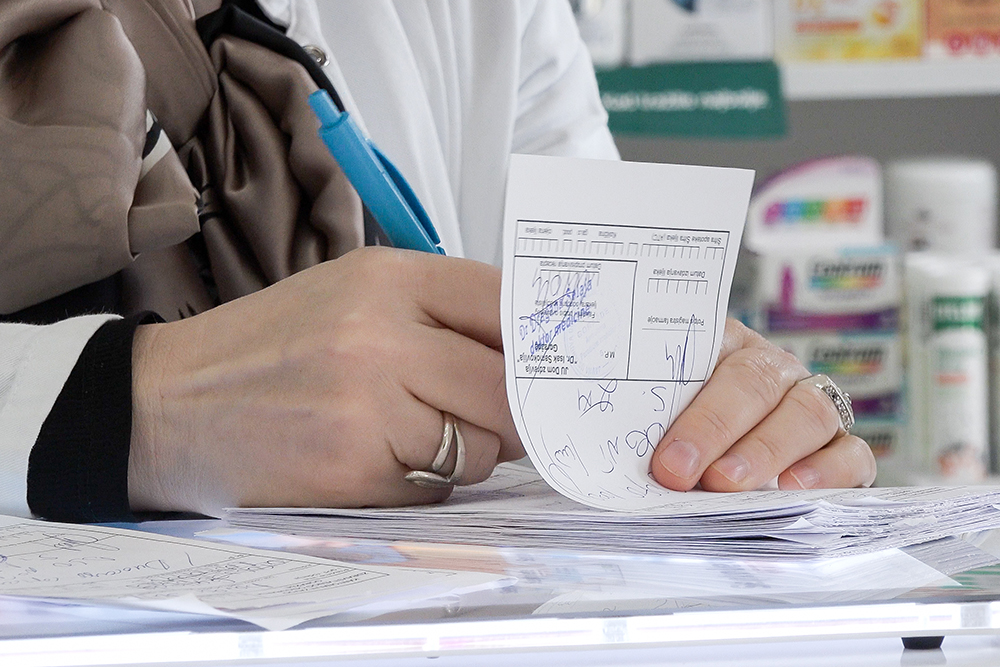 In 2013, a former municipal councilor from Goražde Muamer Pezo decided to open a pharmacy near the hospital and health center. He had a business space convenient for the patients, so he hoped for a successful business.

In the same year, approval for the pharmacy’s establishment was signed by the then cantonal Minister of Social Policy, Health, Displaced Persons and Refugees, Gordana Oršolić, and two years, the pharmacy was approved to operate.

In the fall of 2019, the Supreme Court of the Federation of BiH (FBiH) found that Diva Medica was granted approval based on an irrelevant document.

In the meantime, the pharmacy was passed into the hands of spouses Adisa and Denis Džananović, who opened another branch office in Goražde and Sarajevo and developed a business with an annual income of almost BAM 1.5 million. They regard the court ruling as absurd and illegal.

Despite the verdict, the pharmacy is still operating because the appeal Diva Medica lodged against the decision of the Cantonal and Federation ministries on its closure is still pending.  The Cantonal Court of the Bosnia-Podrinje Canton (BPK) deciding on the appeal, deferred the closure of the pharmacy because it would have left nine workers jobless.

“Had the then minister read the laws and secondary regulations more closely, we would not have had this problem today”, said Cantonal Prime Minister Aida Obuća.

Distance between the pharmacies

Although they had no family or private ties with this area, Denis and Adisa Džananović suddenly, on their way through Goražde in 2013, decided to rent a business space from Muamer Pezo. At the time, Muamer Pezo was already sick and tired of the complications he faced in an attempt to open a pharmacy.

According to the FBiH regulations on the establishment of pharmacies, he had to submit, among other things, a positive opinion of the BPK Chamber of Pharmacists (Cantonal Chamber). In addition, he had to submit a geodetic survey proving that the pharmacy is at least 400 meters away from the next closest one.

As it turned out, he did neither, but despite that, Minister Oršolić signed the approval for the establishment.

Namely, in 2013, the Cantonal Chamber declined Pezo’s request for a positive opinion because he did not present a geodetic survey.

“Is it a chamber of surveyors or pharmacists?” They can put in the Rulebook that founder must have green eyes, and they’ll tell you, your eyes are not green, hence you cannot get a positive opinion”, explains Pezo why he does not accept the competence of the Cantonal Chamber, although its competence is prescribed by law and confirmed by the Supreme Court of FBiH.

He sent a cadastral excerpt to the Ministry stating that the nearest pharmacies were Al Hana and 9. maj, which are 402 and 403 meters away respectively, which corresponded to the prescribed requirement regarding the distance. However, instead of a cadastral excerpt, which has deviations in measurements, the Ministry requested a more precise geodetic survey.

Minister Oršolić did not see any problem with the documentation, and she accepted Pezo’s request as complete and signed the approval for the establishment.

Somewhat later, at the end of March 2016, the Municipal Court in Goražde found that the document based on which she issued the approval was not valid.

“I worked based on the calculation of distance in kilometers”, says Oršolić, claiming that she did not favor Pezo. “Could we have known at the time that it was not accurate? Was it my job to do the calculation and check whether it is right or not or someone else’s?

During 2014, the Džananovićs took over the job from Pezo and asked the Ministry for approval to operate. According to the rules, they turned to the Cantonal Chamber for a positive opinion but were rejected because they attached an old cadastral excerpt.

“We received documentation from Mr. Džananović and the same paper with Pezo’s name on it. Well, I guess the name should be changed”, said the then president of the Cantonal Chamber, Agan Dolović. Dolović is also the owner of the Al Hana Pharmacy, which is located near Diva Medica.

The chamber hired a court expert to measure the actual distance between pharmacies. He wrote in his report that the road distance by car to the Al Hana Pharmacy is 217 meters, and to the 9. maj Pharmacy 337 meters – both closer than allowed.

Realizing that the Cantonal chamber would not give them a positive opinion, the Džananovićs turned to the Federation Chamber.

“I am not interested in the BPK Chamber of Pharmacists, as I am a member of the Federation Chamber, which issues us a license to operate”, says Adisa Džananović.

The then president of the Federation Chamber, Zahida Binakaj, wrote them a positive opinion and that, as she says, was just a matter of technicality. Despite the verdict of the Supreme Court of FBiH, she does not have any doubts about the jurisdiction, however, she says that her decision would have been different if she had known that the information about the distance between pharmacies is untrue.

“This document presented to me (a report of a court expert, author’s note) would be quite sufficient – in its own right – to decline the approval for Diva Medica”, says Binakaj.

After her signature, the competent minister issued a decision approving the operation of the Diva Medica Pharmacy.

“I am not surprised by Pezo or Džananović, as much as I am surprised by the Chamber that represents the profession. They issued the approval of the Chamber of Pharmacists for something over which they have no competence”, says Agan Dolović.

The Cantonal Chamber unsuccessfully appealed to the Federation Ministry of Health, stating that the pharmacy was operating illegally, and then it turned to the FBiH Supreme Court for the solution. In September 2019, the Court annulled the decision on the establishment of Diva Medica and returned the case for reconsideration.

“The Supreme Court of the Federation has made a decision that is just out of mind.  If they were to do it fairly (…) they should have just said, in the worst case, this was not done according to the law and returned the case to the beginning. And not go to the merits, let alone rule on it”, says Denis Džananović.

He believes that Dolović, the owner of Al Hana, abused the Chamber for his own interest.

“This was supposed to be Al Hana Canton – in order to take over city pharmacies”, he says, accusing Dolović of corruption. The Džananovićs believe the institutions are deliberately working against their pharmacy.

“There is the Law on Business Companies, the Law on Health Protection, the Law on Pharmacy, the Rulebook – so if I could comply with all of it, why can’t you do the same?”, says Dolović.

Prime Minister Obuća says that it is absurd not to recognize the verdict.

“There are many decisions that pointed to certain irregularities from the very beginning until today. We are indeed ready to fight against all types of corruption present in the BPK Goražde, and perhaps certain types of corruption that were noted in this case”, said Obuća.

Two years after the Supreme Court ruling, the Cantonal Ministry of Health passed a decision according to which Diva Medica is to be closed.

“It is not easy to decide to close a pharmacy that provides jobs to several people. However, we are obliged to act according to the law, and that is the priority no matter how many jobs are in question. The law must be respected”, says the cantonal Minister of Health Eniz Halilović.

The Džananovićs appealed against this decision, and the Cantonal Court in Goražde temporarily deferred the closure because the pharmacy has nine employees. The Cantonal Chamber claims they were neither informed of this nor were their arguments taken into account, hence they filed a lawsuit seeking revision.

The current president of the Cantonal Chamber, Kenan Žerić, says that things must be done as per regulations. “If everything is in order, and in accordance with the law, the appropriate legal opinion will be passed.”

The health insurance institutes of the BPK and the Sarajevo Canton have not ceased their cooperation with the pharmacy, despite the constant fight, lawsuits, and complaints, the end which seems to be nowhere in sight.

“In my view, if the decision says that it does not meet the conditions, the Federation inspection should close down the pharmacy. And we, as the Institute … we would have no one to do business with”, says the director of the BPK Health Insurance Institute Salem Halilović.

However, this could not happen because Diva Medica launched a new administrative dispute, and the Cantonal Court decided to defer the closure.

“At that moment, the inspection is suspended pending the final court decision. It is interrupted and shall be resumed only after a final court decision is rendered, and that decision will be a third-instance decision”, says the assistant director of the Federation Inspection, Merima Tanović.

Meanwhile, the pharmacy continues to operate. Since 2015, it has collected almost BAM 3.5 million from the BPK Health Insurance Institute on the account of fees for prescription drugs. From the beginning of 2016 to November 2021, Diva Medica had a turnover of around BAM 1.2 million with the Sarajevo Health Insurance Institute. Together with other activities, this pharmacy makes revenue of nearly BAM 1.5 million a year.

The lawyer representing the Cantonal Chamber Elmedina Bojičić explains that it’s a long shot because the system allows for long legal struggles:

“When the Cantonal Court decides, someone will appeal, us or them, then the case goes to the Supreme Court, and then to the Constitutional Court. That’s our justice system.”