Many institutions and individuals in the Balkans like to show off international awards as proof of a great achievement or business accomplishment. In many cases, however, those awards are bogus.

The Organized Crime and Corruption Reporting Project (OCCRP) found that awards mania has swept the region but could find no evidence of competitions or set criteria used to determine winners.

The pattern appears to be that anyone who pays enough money can win an award. Many winners come from the public sector, which means that money paid for awards came from budgets or ultimately from the pockets of taxpayers.

Since 2000, in Bosnia and Herzegovina (BiH) and Serbia, among 250 awardees are around 50 public institutions and their leaders. Some paid for multiple awards at prices that ranged from € 2,000 to over 7,000 a prize.

“Quality” and “prestige” prizes have gone to Balkan companies which later went to bankruptcy or faced investigation.

In 2005, former Sarajevo Airport director Bakir Karahasanović and assistant director Elvedin Begić (who is also president of the BiH Football Association), received the Global Trade Leaders Club (GTLC) award for the airport. In July 2014, the Sarajevo Canton Prosecutor’s Office launched an investigation against them for several charges related to their work at the airport, including abuse of office and making harmful contract for the company.

The organizations that provide these awards are nearly always based in European Union countries and mostly market their awards to developing countries, including those in the Balkans. They operate similarly, and don’t publish a lot of information about themselves. OCCRP reporters identified six of the most active prize organizations.

Otherways Management Association Club (OMAC), based near Paris, France, describes itself on its website as an association which links businesses. Its membership consists of its award winners who come from more than 80 countries.

GTLC is based in Spain, and presents itself as an association of leading businesses with 7,500 members from 95 countries. It says there is no financial contribution needed and the only requirement to join GTLC is to win one of its awards.

But, while memberships are free, the awards themselves require hefty payments. Both OMAC and GTLC awarded a prize to the state-run Belgrade Pharmacy, the largest chain of pharmacy stores in Serbia. The pharmacy received a GTLC award in 2009 for which it paid more than € 5,600. The following year, it received another award from OMAC, but this time the company Berlin-Chemie Belgrade office paid the costs.

Same winners are not the only thing connecting GTLC and OMAC.

Charbel S. Tabet founded OMAC 18 years ago and usually hands over the awards on this organization’s ceremonies. In the past, however, through another organization he ownes – United PubliSalons International – Mr. Tabet worked as GTLC consultant and was even named as a contact person for awardees on an invitation letter for GTLC ceremony in March 2002.

In addition, as a director and founder of company Foodica Best Foods he also received a GTLC award in 1994. The company later got awards from OMAC as well, which means one of his organizations awarded another.

Other organizations OCCRP looked into were:

OCCRP contacted all six organizations. Four never replied, while GTLC sent information copied from their website and invited journalist to a lunch during upcoming ceremony in Paris.

OMAC wrote their criteria to choose the awardees is strict and not anyone who offers money can be awarded. „We do not sell potatoes“, they replied. Still, they noted that organizing an event in Europe requires a high budget and since they do not have sponsors, they are forced to take „humble participation fees“ from the awardees.

The prize organizations hold several award ceremonies a year, usually in cities such as Madrid, Berlin, London and Paris. The awards all have similar names, including words such as international/golden award for prestige, quality, leadership or new millennium and diamond award.

Embassy representatives often attend the ceremonies and sometimes even hand out the awards, while ministries at home send out congratulatory press releases. Media reported that the ceremonies were attended by BiH ambassadors Tanja Milašinović, Elvira Begović, Enver Halilović, Midhat Haračić and others.

The organizations all find new nominees in the same way. They say they research and choose the best, but in reality in most cases they send out hundreds of email invitations.

When Ibrahim Jusufranić was director of the GRAS public transport company in Sarajevo, it received an award from Actualidad in 2004; when he became owner of the private International University in Travnik, it racked up awards from EBA, OMAC and ESQR.

Several winners told OCCRP that in the past, fees were lower than today, though the few available records from 10 to 15 years ago show that it was a big business even then. In 2003, the BiH state Foreign Investment Promotion Agency (FIPA) paid € 3,500 for the BID award and around € 600 for its then director Mirza Hajrić’s travel costs.

“Awards” to the Centar Borough 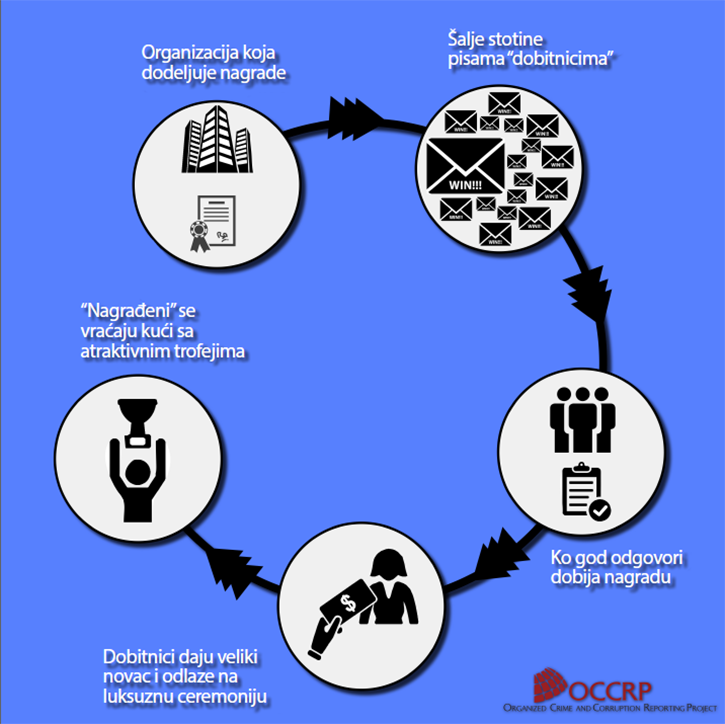 Although the awards mean nothing, winners tend to be proud of them and don’t mind paying for travel, hotel and food for (usually) two people to attend a prize ceremony, plus registration fees and costs to cover the trophy, diploma and advertising trumpeting their success.

Some organizations claim rare exceptions – for example, the Academy of Fine Arts in Siroki Brijeg, BiH, received the Actualidad statue from the Spanish ambassador in BiH in 2009. Officials said they did not pay for their prize. Still, OCCRP found others who did pay Actualidad – like the public kindergarten, Children of Sarajevo, which coughed up € 3,600 in 2010, while BH Telecom paid € 4,200 plus € 550 in travel expenses three years earlier.

Some institutions and companies have announced awards on their websites but told journalists they didn’t actually have a physical prize to show. Usually, they said, that was because they didn’t have enough money to cover the costs of receiving the honor.

Sarajevo Centar Municipality is proud to report on its website that it has received 23 international awards. In fact, officials traveled to one ceremony in 2003 and received three other awards by mail. As for the other 19 prizes, officials did not travel or pay the organizations that contacted them – though they still boasted of winning the prizes.

For the 2003 award that Sarajevo Center officials did pick up at the OMAC ceremony in Geneva, the municipality paid € 3,600, plus € 1,115 for visas, per diems and plane tickets for Ljubiša Marković, municipality mayor, and Husein Kulenović, chairman of the Municipality Council.

For the three awards that came by mail from the same organization, it paid € 6,200 – a lower price since OMAC gave a discount for skipping the ceremony.

The organizations seem quite eager to cut deals, and may drop the price. OMAC offered the municipality 10 other awards between 2002-2011 (three in 2008). When Mayor Marković asked OMAC how much one award would cost, OMAC’s president said US$ 3,900 but then sweetened the deal: “I offer you two more nights bed & breakfast at the Intercontinental Hotel Vienna at our own expenses, Dear Excellency & Brother Mr. Markovic.”