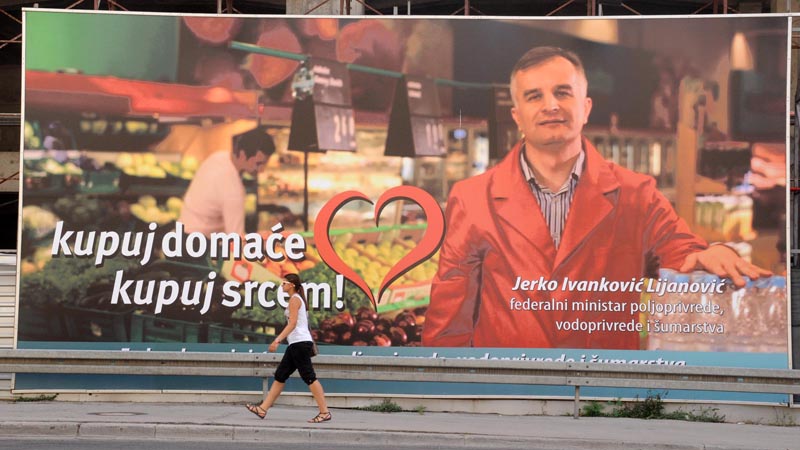 The advertising campaign “Buy Local” in which the Federation of Bosnia and Herzegovina (FBiH) Minister of Agriculture, Water and Forestry Jerko Ivanković Lijanović calls on the population to buy local products cost 671,888 KM.

The campaign has also cost Lijanovic some criticism.

For one thing, the firms that developed and published the promotional material—Sarajevo-based Tim System and S.V.-RSA—were selected with no regard for the BiH Law on Public Procurement.

For another the slogan “Buy Local – Buy with Heart” recalls the slogan “With Heart for Betterment” that has been promoted by the Minister’s political party Through Work to Betterment.

Lijanović defends the campaign and its intent. He said that the Ministry paid for the campaign with money budgeted for support of agriculture and that this was in accordance with the laws and regulations. “We thought that every mark invested this way was going to produce much bigger effect than giving the money directly to farmers,” Lijanović told the Center for Investigative Reporting in Sarajevo (CIN). He added that local producers have problems with distribution of products and this was a way to help them out.

He said that this campaign was not meant to promote his party and that “the heart” theme was not his idea but that of a marketing agency. He said it also was not his idea to star in the campaign. His face is dominating billboards and TV screens. Lijanović said that his goal was to show that the government was behind the campaign. “We agreed that the Prime Minister and I as the relevant minister would be in this video number. But, during the shooting of the video, the minister was delayed and I did not want to halt it, considering the whole process to be too important. I suggested that I bear the whole brunt of the campaign.”

Tim System was hired to do creative design of the campaign and broadcasting. It got a contract worth 126,458 KM last December. The firm’s director Sanela Prašović-Gadžo told CIN that the idea was to feature several ministers from different parties in the video in order to motivate citizens to buy local products. However, at the meeting in the ministry it was decided on Lijanović . “The Heart” is also the firm’s idea. “We were going for a raw emotion. In other words, buy with heart something you love – buy your own, said Prašović-Gadžo. She said she did not know that the heart was a symbol of Lijanović’s party and that she only found about this later.

Maksida Pirić, a spokesperson for the BiH Central Electoral Commission, said that political parties are forbidden from putting out paid advertisement until Sept. 7. However, in this case, the promotional video “Let’s Buy Local” was paid for by the Ministry. “There’s got to be a piece of evidence proving that the party is behind this” said Pirić.

A non-governmental organization Transparency International BiH (TI BiH) which fights the corruption in the country, two years ago criticized the use of public funds for election campaigns. That year the FBiH Ministry of Energy, Mining and Industry and the Power Authority backed an advertisement campaign “It’s Not Too Late for Better Life”. TI BiH said that campaign was used to promote the Party for BiH and its then minister Vahid Hećo.

Also, taxpayers money was used to finance a film by the Republika Srpska Government proclaiming “Proud of the Srpska“ which promoted not only the elections but also highlights of the Alliance of Independent Social Democrats.