Before the war, Elektrobosna employees had plenty of safety equipment. Today, serious injuries can result from lack of items as inexpensive as a 10KM pair of work gloves. 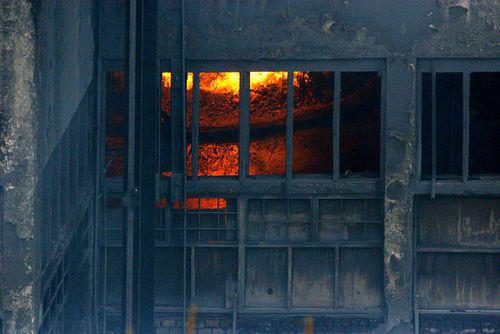 The production of silicon metals at the Elektrobosna-N (EB-N) factory in Jajce is hot and dangerous work. But at least before the war, workers knew that management would provide the best equipment and enforce strict workplace safety rules.

But many of the industrial accidents that happened at the factory since the war were the result of disregard for workplace safety standards, workers say. Employees were working without proper protective gloves and suits, which they often had to buy themselves. Even when they would get some protective equipment, it was often inadequate, workers say.

When a worker recently lost an arm, Adnan Adžemović, Srednjobosanski cantonal inspector for workplace protection, went to the accident scene. ‘I examined the equipment. I was asking if periodic inspections had been done on machines, installations and lightning rods. I found that it hadn’t’ Adžemović said. He added that the injured worker wasn’t trained in general safety in the workplace.

In December of 2005, Adžemović issued a formal decision which gave the employer 20 days to examine and fix all the problems he listed. ‘I performed an examination and found that management did not meet the deadline. After that I submitted a complaint to the Federal Ministry of Justice’ Adžemović says. He wrote in his complaint that EB-N did not periodically check machines, installations and equipment, that there was no employee training for workplace safety, that the company did not determine the high-risk work locations, and that workers with hazardous jobs were not sent to periodic medical exams.

Anto Đeno, former director of production at EB-N, agreed that workplace safety standards were low. He said some workers were exposed to almost unbearable concentrations of silicon dust. Because of that, many of them had respiratory problems.

Đeno says that EB-N had a rulebook about protective equipment which was introduced in 1998. Damaged working suits were supposed to be replaced with new ones, but workers seldom received them. Workers were forced to wear short gloves when the standard long protective gloves were not available. According to Đeno, protective suits cost between 60 and 200 KM, while the price of gloves was 8 to 10 KM.

Ivica Blažević was one of those EB-N workers forced to wear short gloves. He was also bothered by the lack of training of his coworkers and complained to Đeno about them. Two years ago his arms were badly scorched by molten metal while pumping oxygen into a furnace. He said the accident could have been avoided if his coworkers had been properly trained, a hose hadn’t failed and if he had been given proper protection.

‘Workers worked in poor conditions and without protective gear’ said Saša Tepić, former head of production at the factory. ‘There were no helmets. They worked in boots that were not fireproof. They even came to work in sneakers, and regular pants and shirts.’

He said employees sometimes wore gloves covered with oil while working at the furnaces. ‘It’s like adding fuel to fire’ said Tepić.

In an effort to improve working conditions, Đeno urged management to follow proper safety procedures. ‘I sent memos to the directors of EB-N. They always answered: ‘it’s coming.’ If I didn’t get what I asked for from the director, I would write to the supervisory board. I was constantly telling workers … that their safety comes first, and after that is the job’ Đeno said.

According to retired worker Luka Matekalo, before the war, legal standards on workplace safety were followed to the letter. Workers wore asbestos suits that were regularly replaced every six months, together with boots and chest guards. ‘There was equipment to throw around’ said Matekalo.

Current EB-N officials refused to talk to CIN reporters for this story.