A Cobbled Together Justice System

At all levels justice suffers because multiple layers of courts with murky jurisdictions and too many insignificant cases cannot get through their workloads. 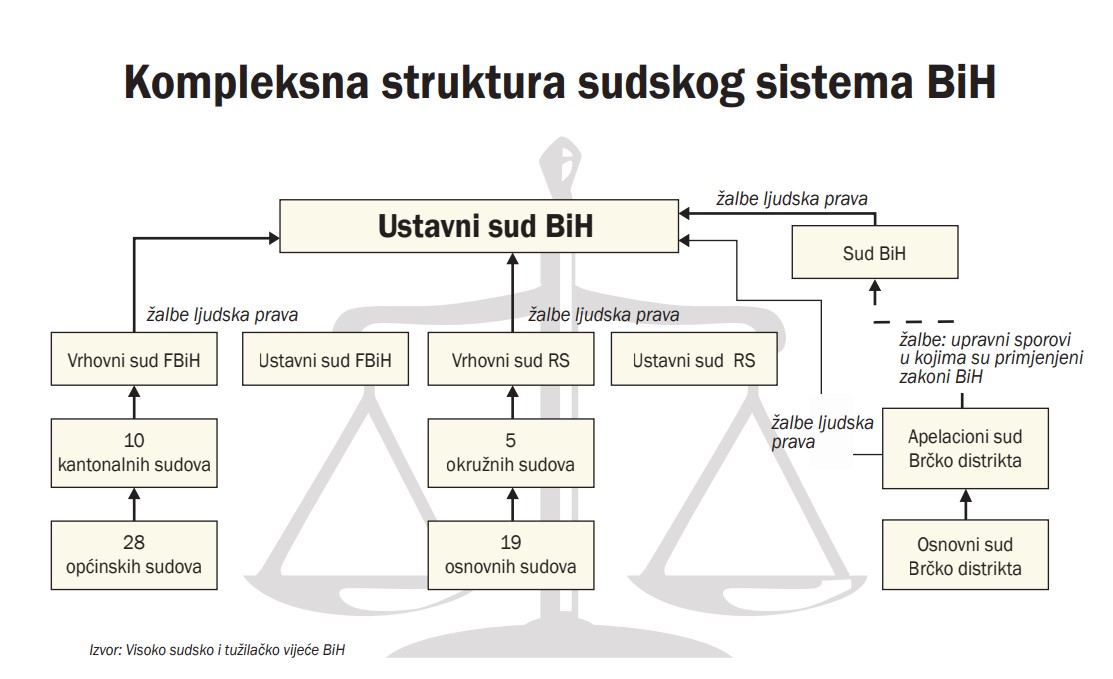 The Constitutional Court of Bosnia and Herzegovina (BiH) is part of a Frankenstein monster of a judicial system, cobbled together in post-war BiH from parts of the old Yugoslav system, the Dayton Peace Agreement and bits and pieces added by international donors. The result is a confusing, dysfunctional justice system that too often poorly serves its citizens.

Consider these laments by some of the 40 people involved with the courts that the Center for Investigative Reporting in Sarajevo (CIN) interviewed for these stories:

Transparency International found in a 2007 report that, ‘The fact that there is no single structure of courts, has significant impact on the work and efficiency of the judicial system.’

In the Brčko District, two courts – a basic and appeals court — accomplish all the chores of the three-court system the entities use. From those two courts some cases can be appealed to courts outside the district — cases involving government agencies go to the Court of BiH, while matters involving human rights may be sent to the Constitutional Court of BiH.

Above all, and completely separate, is the Constitutional Court of BiH, which hears cases involving constitutional rights similar to those of the entities, but on the state level. This court is also charged with hearing appeals with a constitutional element from all of the lower courts – a responsibility that has caused its own case logjam and, some say, interferes with its work on its primary directive.

Finally, the Court of BiH was created by the Office of the High Representative and is staffed by national and international jurists to handle cases of war crimes and organized crime.

A working group of BiH jurists found in 2006 that, ‘Overall, BiH citizens noted that problems experienced at court caused frustration among both court staff and court users, and often meant that visiting a courthouse was an uncomfortable and, occasionally, frightening experience.’

The findings were included in the Strategy for Care of Court Users composed by officials from the ministries of justice of BiH and the Republika Srpska, the High Judicial and Prosecutorial Council of BiH (HJPC), and from judge associations at the state and two entity levels.

The source of much of the public’s frustration with the legal system is the snail’s pace at which it moves. Citizens can wait a year for a first hearing on a routine matter like a wrongful termination. Decade-long trials make a mockery of the courts and verdicts, court watchers said. In those circumstances, even when courts provide relief to a business or person, it can be too late to matter.

Behind delayed justice lies jammed court dockets. All courts are busy, according to the HJPC, which counted at the end of 2007 almost 1.9 million unsolved cases pending in the nation’s courts (excluding entity and state level constitutional courts).

First-level courts are especially clogged with utility companies trying to collect payments, many for piddling amounts, from customers. The HJPC found in its 2007 annual report that nearly 1.2 million utility cases were on the dockets of the country’s courts. As one example, Sarajevo Municipal Court figures show that even if the court didn’t get a single new case – while actually 150,000 might be expected – it would still take nearly four years to clear the backlog.

Reformers have studied the problem for years, but no one has yet figured out how to take utility bills out of the courtroom. BiH lacks debt collection systems, and politicians are unwilling to risk angering constituents by allowing utilities to cut off service to non-paying customers.