Big Drug Dealers Have Little to Fear in BiH

Justice only nabs small-time players in BiH’s drug trafficking scene. While the BiH has little or no cooperation with international police, the big fish get away. 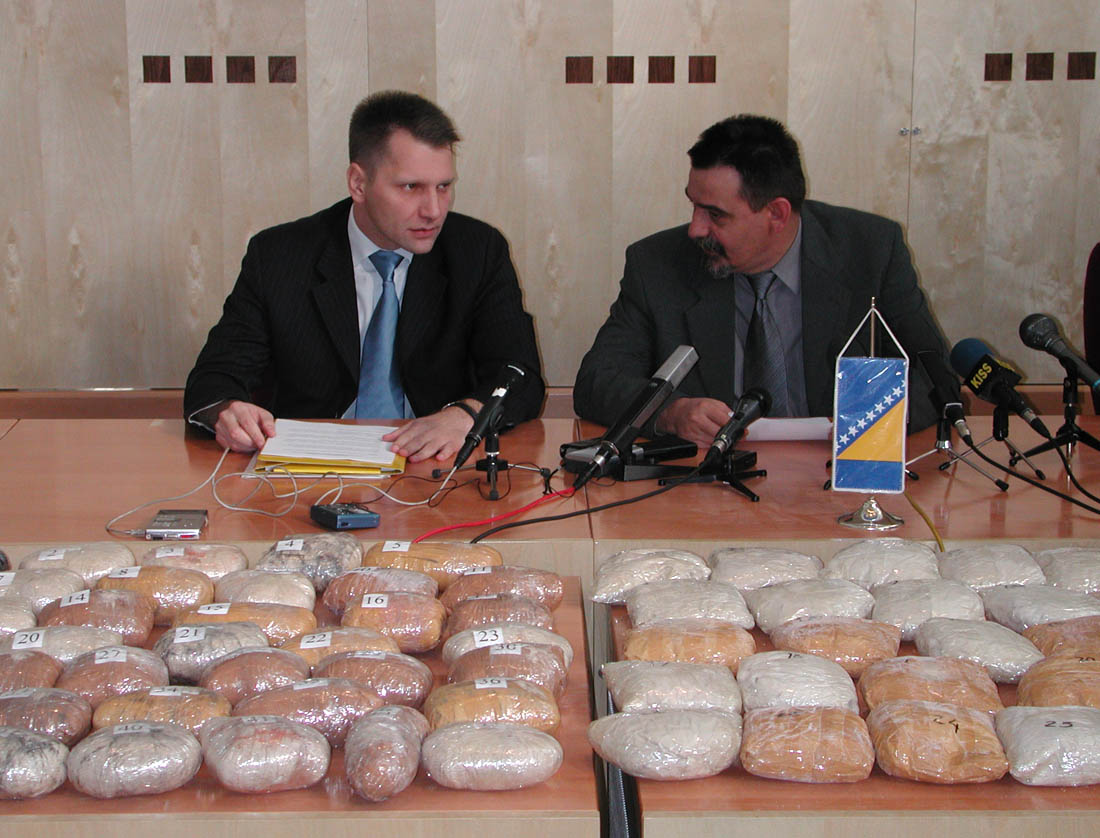 The police patrol accompanied by a bomb squad arrived at Darinka Glamočak’s Sarajevo rental apartment Jan. 22, 2005. All they knew was that an anonymous caller had warned her that the flat might blow up because she had rented it to the wrong person.

There was no bomb inside, but the officers found 21.3 kilos of heroin and a lead to 17.4 kilos more in a separate apartment. Although investigators suspected the drugs were part of an international smuggling operation, in the end they managed to jail only two 19-year-old men – Glamočak’s renter and another who set up the storage place.

An investigation by the Center for Investigative Reporting in Sarajevo (CIN) shows that this case is the rule rather than the exception. Instead of busting the big dealers, the Bosnia and Herzegovina (BiH) judiciary chiefly is prosecuting and convicting small-time players in drug smuggling rings.

The CIN project, ‘Hard Drug State’ examined 16 cases in the Court of BiH involving 22 people for illegal drug trafficking across borders, with some of the cases over shipments of dozens of kilos of heroin or marijuana.

The average punishment in those cases was two years and five months in prison — exactly the punishment received by Vlade Prnjat, 44, after being caught carrying 67.7 kilos of marijuana across the border near Trebinje in 2005.

Justice officials say one reason for such short drug sentences is that dealers seldom are charged for being part of an organized criminal network, even though many are.

At the press conference following the seizure of the 38.7 kilos of heroin in Darinka Glamočak’s rental and another Sarajevo apartment, the BiH Prosecutor’s Office and Federation of BiH (FBiH) and Sarajevo Canton Ministries of Internal Affairs (MUP) portrayed the case as the crowning acheivement of successful collaboration and the break-up of an international drug smuggling chain. The following court process revealed how far from the truth those statements were.

The prosecutor in charge, Božo Mihajlović, said he does not want to talk about the case, which did not fare well in court. The epilogue of this big drug bust shows the shortcomings of judicial institutions in the fight against drug gangs.

The only people convicted were Jasmin Pačariz and Zlatan Subašić, teenagers attracted by easy money and lured into international drug smuggling. Their role was to rent the apartments in order to hide the heroin.

According to court records, it all started in January 2005, when the phone rang in Darinka Glamočak’s apartment in Sarajevo. ‘You better be careful about who you rent the apartment to, because your house may blow up’ a deep-voiced man told Glamočak, then hung up.

Glamočak was astounded because, only several days earlier, she had rented an apartment to a boyish-looking young man who presented himself as a college student. There was nobody living in the apartment in Varaždinska Street 1, and Glamočak wanted to make extra money.

She didn’t even ask for the young man’s ID because his boyish looks didn’t provoke her suspicion. Glamočak soon learned that the young man’s real name was Zlatan Subašić. At the time, he was 19 and a student in Dobrinja Gymnasium.

Alarmed by the call, Glamočak dialed the police number and repeated what the anonymous caller had said to her. According to court documents, she went to her house accompanied by a Sarajevo Canton MUP police patrol and a bomb squad because the threatening voice mentioned the possibility of blowing up a house.

The officers found 21.3 kilos of heroin hidden in the closet and under the bed. Because the find was so large, the case was handed over to the FBiH MUP, since it was clearly a case of international trade, police officials said.

According to records it was the first arrest for Subašić, the high school teenager.

The police traced him easily by his phone number after Glamočak agreed to submit her house number call list. Just a few days earlier, Subašić negotiated the apartment lease by calling from a mobile phone registered in his own name.

However, the same method failed to uncover the owner of the mobile phone used by the man who told Darinka Glamočak that her house might blow up. The caller was more careful than Subašić, and he used a pre-paid phone number that prosecutors were unable to trace.

It is possible to buy such a phone card from a news stand without registering the owner’s information. According to court records, police couldn’t trace the owner.

The gymnasium student was quickly located and jailed, and he disclosed his handler, Pačariz Jasmin, straight away.

Pačariz talked Subašić into renting an apartment under a false name and presenting himself as a college student in order to store heroin transported from Turkey. Pačariz was also quickly apprehended, uncovering the next link in the drug smuggling chain.

Pačariz told investigators that the heroin was brought to Sarajevo by brothers Edin and Admir Džihić, Serbian citizens hailing from Sjeverin in Sandžak.

At the time, 25-year-old Admir lived in Turkey and occasionally visited BiH for holidays. According to the BiH prosecutions office and police, he is married to a Turkish woman with whom he inherited a sock factory after her father died. Heroin was transported from Turkey to Sarajevo in shipments of socks.

In Sarajevo, the ‘goods’ were received by Admir’s brother, Edin, called, ‘the Turk’ and, using small players like Pačariz, hid heroin in apartments for further distribution.

This is where the investigation stopped.

As soon as he heard that Pačariz had been arrested, Edin Džihić fled to Serbia with his girlfriend. Admir was already in Turkey, so the brothers were out of the reach of the BiH judiciary. During the investigation, the brothers were referred to only as suspects.

Fighting international crime requires cooperation, said EUPM adviser Donley, who added that, ‘There is no exchange of intelligence between agencies in other countries and domestic ones and agencies within the BiH as well.’

The closest that the BiH judiciary ever got to the Džihić brothers was talking to their parents, Samija and Nusret Džihić, who lived in Trg djece Dobrinje 15 Street in the Sarajevo borough Dobrinja.

It was Samija who took the police to another apartment she rented for her son Edin, where another 17.4 kilos of heroin were found at Teheranski trg 1 Street. That increased the total amount of heroin seized to almost 39 kilos.

Nusret and Samija Džihić soon moved out of Dobrinja, and prosecutors couldn’t track them down to testify. Their former flat has been empty for a while, said a neighbor.

Nine months after the arrests, the Court BiH sentenced Jasmin Pačariz to nine years and Zlatan Subašić to five years in prison. Three months later, the court reduced the sentences to five years and one year respectively. Bigger criminals remained out of the domestic judiciary’s reach. In the entire case, prosecutor Mihajlović only managed to indict two 19 year olds who were at the very bottom of the smuggler food chain, and even that was thanks to an anonymous tip possibly from a competing drug gang.

CIN journalists obtained unofficial information from the BiH Prosecutor’s Office that there is a warrant for the arrests of Edin and Admir Džihić. But officials in the BiH Ministry of Security said that warrants are issued only for indicted or convicted individuals and not for suspects.

The brothers Džihić are nowhere to be found on Interpol lists of wanted individuals. The BiH Border Police would not say whether they were notified about warrants because that information is classified. They also didn’t want to divulge whether the brothers Džihić had crossed the BiH border since the drug seizure, citing the Law on the Protection of Personal Data.

Confidence between domestic institutions has to be built first in order for them to better coordinate, said Donley. He could not name any coordinated action on fighting drug smugglers in BiH.

Milana Škipina, the acting head of the Department for the Prevention of Drug and Precursors Abuse at the BiH Ministry of Security, said that international cooperation with the domestic police is limited because the policemen typically don’t know the English language. She said that her section barely managed to find three officers who knew the language in order to send them to specialist training in Turkey.