Fuel traders in Bosnia and Herzegovina (BiH) sold nearly 10 million liters of biodiesel to unsuspecting gas station customers over the past three years. While they paid the full price for diesel, what actually went into their vehicles was an inferior biofuel-mix, according to the BiH Indirect Taxation Authority (UIO) and inspections. 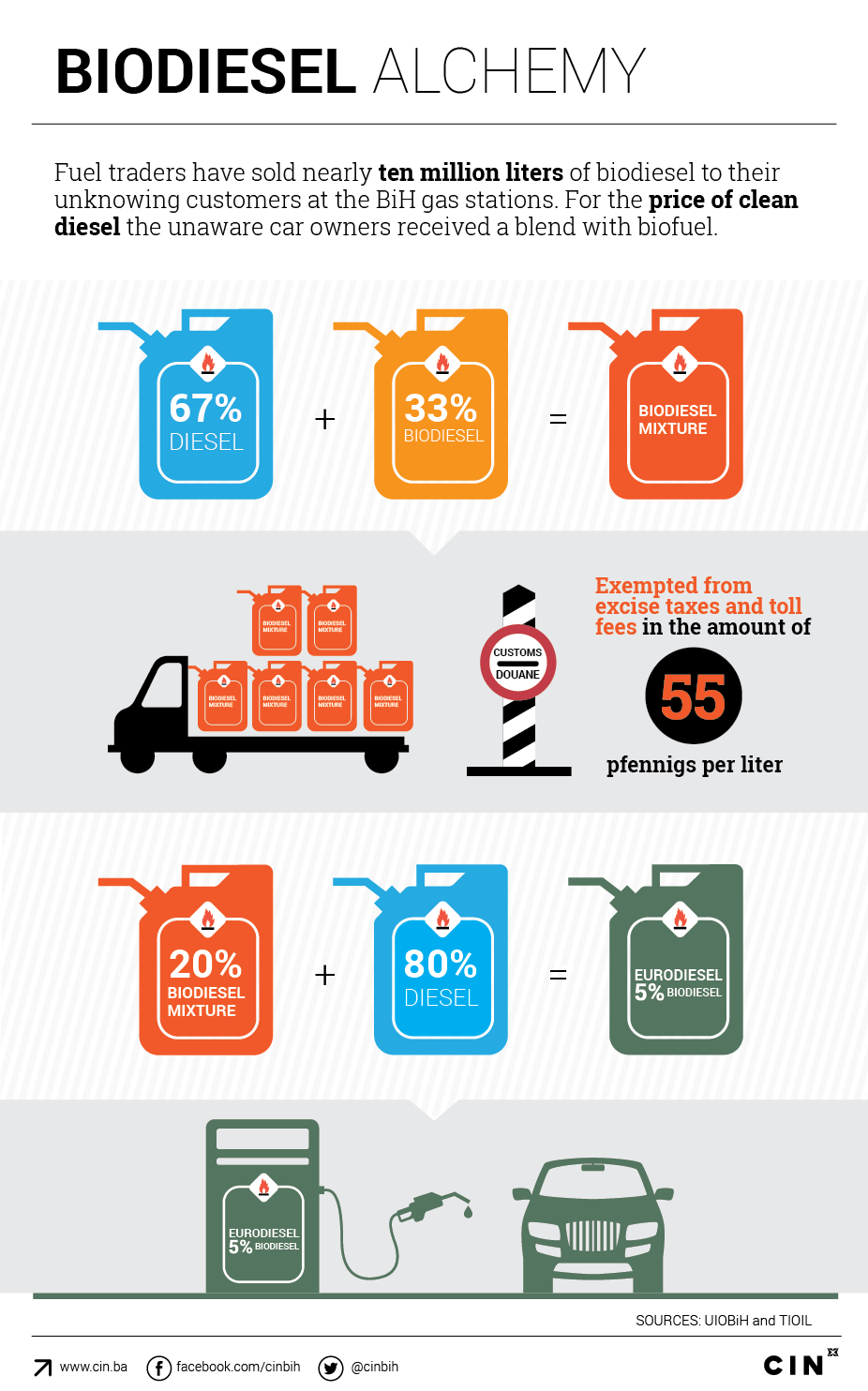 Trying to make extra, easy money, some traders figured out that a mixture of two-thirds diesel and one-third bio-diesel was exempted from excise tax and toll fees —  55 pfennigs per liter – that importers of pure diesel must pay. So, they imported the cheaper fuel then dissolved it with more diesel and sold it as the real thing. They took in profit while the state lost revenue and customers were cheated.

Bio-diesel can cause car engine problems and can also increase fuel consumption.

At least 17 companies trading in oil and oil derivatives sold the diesel blend to unsuspecting drivers between 2013 and 2015. Some traders say that they did not break the law and did not have to tell customers about the diesel blend they were selling because it contained only 5 percent biodiesel.

UIO BiH’x department does not agree. In a July 2015 report, it says customers were misled and paid for nearly 10 million liters of biodiesel as if it had been pure diesel that costs more because of excise tax. Moreover, the tax authorities have calculated that the state budget was cheated out of nearly 2.4 million KM. The tax authorities requested entity inspections to look into the matter. However, they could do nothing because the fuel had been already sold the law precluded them from inspecting bio-diesel. Only some traders in Repulika Srpska (RS) were hit with small fines for fooling customers according to the RS Law on Consumer Protection. These fines were several hundred times less than the profit they made selling bio-diesel.

“I have investigated a loophole,” Tihomir Matošević, a director  of Vitez-based TIOIL, the biggest importer and biodiesel distributer in BiH, told the Center for Investigative Reporting in Sarajevo (CIN).

Over two and a half years, his firm imported nearly 8.8 million liters, mainly from the Austrian firm Sibex. Matošević was one of the first who realized that it was possible to import huge amounts of diesel mixed with bio-fuel and thus avoid paying taxes and duties. According to the BiH Excise Law, bio-diesel is exempted from excise tax and toll fees.

One part, nearly 2.5 million liters of biodiesel mixture, TIOIL additionally blended with pure diesel and sold at its gas stations. TIOIL has 40 pumps in BiH. Then, it supplied the reminder of the mixture to other fuel traders and transport and mining companies.

According to UIO, TIOIL delivered more than 1.6 million liters of bio-diesel and diesel mixture to Jerry Trade and Buba Commerce, companies with gas stations also incorporated in Vitez.

However, Jerry Trade owner Tomislav Čeko said that TIOIL did not supply it with biodiesel, but with pure Eurodiesel 5, and that Čeko paid and sold it as such. UIO has listed Jerry Trade among 17 firms the misled customers by selling bio-diesel.

“I did not fool customers…I did not know that I was selling bio-diesel. I did not pay attention to it. I order and he sends it to me. Do you think that I am Einstein?“ Čeko told CIN.

Buba Commerce owner Dragan Jurčević, did not respond to calls.

TIOIL also supplied oil companies in other parts of the country with bio-diesel mixture. Mandić Petrol from East Sarajevo bought 660,000 liters that it sold as diesel. Monaco from Bijeljina did the same. It sold 151,757 liters of biodiesel as diesel, according to the reports of the RS inspection and UIO.

After UIO inspections became more frequent in TIOIL, the company stopped importing and selling bio-diesel last year. Matošević said that he stopped the bio-diesel business because of frequent inspections and the distrust of institutions.

“Because I had enough of those black suits, the customs uniforms (visiting) every day. I could not breathe because of them…I don’t do that anymore,” said Matošević. “As Rojs (a populist Croatian politician) said ‘who grabbed, grabbed’”.

Nevertheless, Austrian Sibex continued delivering bio-diesel to BiH through its Sarajevo firm Saga Energy. It imported more than 3 million of the total 3.4 million liters of biodiesel imported last year. The latest records from UIO show that import of biodiesel has slumped. This March just 200 liters came in.

If everything has been legal, why have the importers stopped? UIO officials have wondered aloud.

TIOIL Director Tihomir Matošević said that he was bolstered by the Law on Oil Derivatives in FBiH because it allows the blending of diesel and bio-diesel.

Bio-diesel fuel is less harmful to the environment than diesel but can be damaging to some engine parts. Vehicles need more bio-diesel to cover the same distance.

BiH fuel importers usually procure the mixture made up of around 67 percent of diesel and 33 percent bio-diesel.

Matošević said that in the beginning he tried to mix pure bio-diesel and diesel at his pumps, but the two fuels would separate after a time.  So he did the mixing under pressure in a facility in the Slovenian city of Kopar. The product was a bio-diesel fuel made up of two-thirds of diesel and one-third of bio-diesel which he imported into BiH without paying excise tax and toll fees. These was in accordance with the EU directives to which BiH is a signing party. Then he mixed the imported fuel with diesel at his gas stations to arrive at a mixture of 95 percent diesel and 5 percent bio-diesel. He said this did not cause problems as the first mixtures at the pump had.

Biofuel expert Dževad Bibić, a professor at the School of Mechanical Engineering in in Sarajevo, said he doubted an adequate mix of bio-diesel and diesel could be accomplished in the reservoirs at gas stations.

“It is one thing to make a mixture under the controlled conditions and another thing to do it measuring by eye…What percentage of mixture you’ll have can be quite questionable. I am not an optimist that such good mixtures could be created,” he said.

He said that European standards, allow up to 7 percent of bio-diesel in diesel and that such mixture don’t affect the lifespan of engines. However, BiH legislation allows for only 5 percent.

The most biodiesel was sold in central Bosnia. Car repair shop owners from that area said they did a lot of work unclogging fuel injection systems of sticky masses.

Workers at the car repair shop Božić in Novi Travnik said that they often saw the detrimental effects of catastrophically bad fuel in this area.

The worst is when during the winter a thick mass forms around car filters and clogs them. This fuel also destroys valves.

“Well, the costs can run up to thousands of Euros and more,” said shop owner Josip Božić.

In a nearby shop, the owners/brothers Davor and Dražen Dragić said that every fourth car that enters has problems because of diesel fuel.

UIO officials doubted the traders’ claims about the mixing of fuel and in March 2015, they ordered the inspections in the Federation of BiH and Republika Srpska, to inspect the fuel quality in several firms.

However, the inspections could not do the testing because laws and by-laws do not allow for testing of bio-diesel quality and apart from that, they received data on the sale of bio-diesel too late, only after it had been sold.

Still, the RS Authority for Inspection Affairs found in the paperwork that bio-diesel was transported in the diesel reservoirs and it fined several distributers because of violations of RS consumer laws. The fines range from 2,000 to 10,000 KM for companies and 800 to 4,000 for company representatives, but the inspectors called for the smallest possible fines. The combined fines for misleading customers amounted to around 16,000 KM, far below the profit distributers made from selling biodiesel at the gas stations.

The RS inspectors found that Mandić Petrol sold 510,155 liters of biodiesel at its gas stations in East Ilidža and Lukavica, Kula, Krupac and Grlica in the East Sarajevo during 2015.

They pumped out fuel into diesel reservoirs while the director told the inspectors that he could not be sure that bio-diesel was mixed with diesel in the acceptable ratio.

By selling the mixture as straight diesel, they failed to warn consumers about the possibility of damage and misled them about actual make-up of the fuel. This is why the inspection fined Mandić Petrol and its officers with the minimum fines of 2,000 KM and 400 KM respectively.

Mandic’s founder and director Nenad Mandić said he paid the fine, but he used the fuel in his own vehicles. A document from inspectors sent to CIN says that Mandić said the fuel was sold at four gas stations.

Asked about the discrepancy, Mandić said: “I could not resist. They said ‘We have to punish you and that’s it.’”

In the same way, Monaco sold the mixture at its pumps at ATC Bijeljina, Dragaljevac and Stefan Dečanski during 2014.

In this case, its director said that the share of biodiesel was within the legal limits in 91,326 liters it sold. However, no authorized lab for testing biodiesel exists in the RS. No company is authorized to blend biodiesel and diesel.

These are not the only problems with this fuel on the market.

Miljan Savić, an expert assistant at the state Institute for Standardization, said that a 2002 Decision on the Quality of Liquid Fuels is still in force. It stipulates the minimum characteristics of tested fuels, but it does not eliminate bio-diesel.

Companies TIOIL, Mandić Petrol, Jerry Trade, Buba Commerce and Monaco did not have the permits to trade in bio-diesel that the entity ministries of industry, energy and mining issue. One such permit was issued in the FBiH and none in the RS.

In the FBiH, five firms applied for a permit, but they did not submit required paperwork.

“We turn to them, but nothing. We send it, then nothing again. I call up and they say, ‘Come, we’ll find a way’. C’mon, we’ll find a way?!” said Matošević. He stopped communicating with the government.