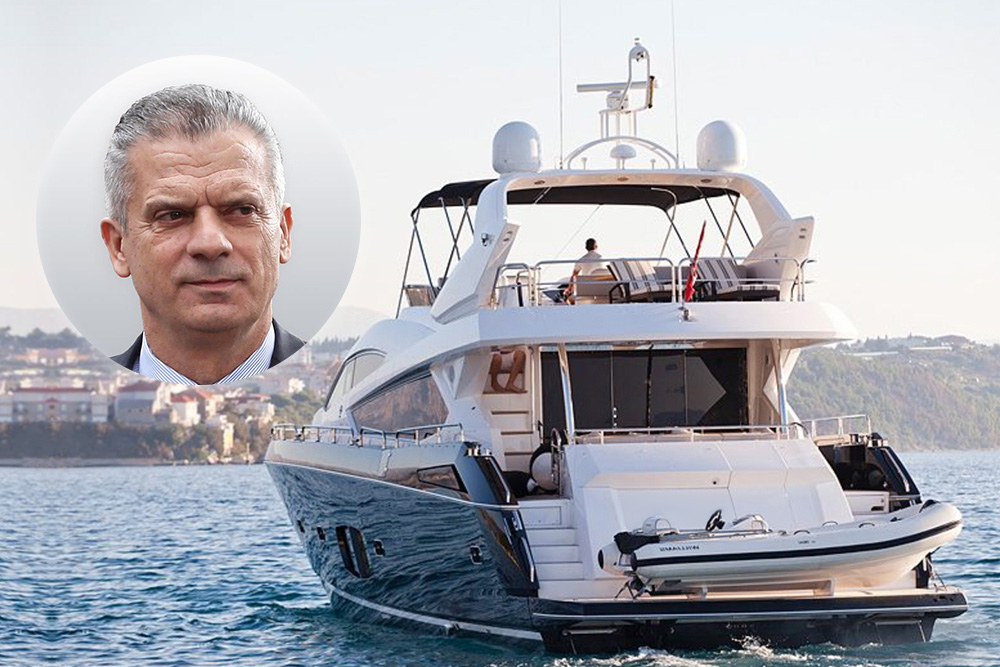 Fahrudin Radončić, president of the Party for a Better Future of BiH (SBBBiH), bought a yacht for BAM 3.03 million in October 2020.

A 24-meters long luxury black and white yacht Sunseeker 80 Black Mamba with a spacious living room, bedroom, and guest room was produced in 2010. A seasonal berth in the marina for this yacht costs about BAM 46,000.

A month before he bought the “Black Mamba”, Radončić sold his 17,5 meters long Princess 62, which he bought in 2018 for almost BAM 3.6 million. The Princess 62 ended up in the hands of the Serbian company Prointer Sistem this year.

CIN journalists discovered that Radončić sold this yacht to the business consulting company Infinle Consulting from Pale for BAM 2,414,425.

According to his account, the purchase agreement was signed in September 2020, but the Pale company paid the last installment only in February this year. A month later, they resold the yacht to the Belgrade company Prointer System for BAM 2.45 million.

Director of Infinle Consulting, Vera Đokić, told CIN that her company learned in 2020 that the Prointer System was interested in buying a yacht. At the same time, they had information that there was a yacht on the market that was being sold “at a slightly better price”. Hence, they decided to buy and resell the yacht to make some profit from it. According to papers, they earned BAM 45,133.

Early in April, Prointer System was registered as the owner of the Princess 62 yacht, and Martin Jokić, the company’s spokesman, confirmed that they bought the craft for the company’s needs: “To sail a yacht. It is our civil right.”

Radončić says that he did not know that the yacht was resold to a company from Serbia, and he claims they never cooperated.

“I sold nothing to Prointer. I did have not worked with Prointer because I sold it to them [Infinle Consulting, author’s note]. I really don’t know if they resold it to anyone else and whom they did it for.

Along with the Black Mamba, Radončić last year bought a luxurious five-room apartment near Gorica Park in Podgorica for one million BAM.

“Everything I buy in Montenegro is on credit”, said he, confirming to have taken a BAM 2.8 million loan.

CIN previously wrote about Radončić who had been passionately buying and selling luxury real estate in the Bay of Kotor in 2014. In two years, he paid almost BAM 11 million for four apartments, six garages, and the company PM 1.25 in Porto Montenegro, and shares in the Montenegro Telekom.

In the meantime, Radončić was left with only one, the largest apartment of 351 square meters and three garages. He sold the second apartment with two garages in 2016. He donated the company and the remaining two apartments with garages to his son Irhad, who later sold them.

In 2017, CIN journalists discovered that he took money for investments from the Sarajevo companies Avaz and Avaz-roto press, which he gave or sold to his wife Azra Radončić for BAM 200 million in mid-2012, after the divorce. He invested millions in real estate in Montenegro, although he did not receive these payments regularly. Radončić claims that money from selling these companies has not yet been fully paid to him, while not sure if he has any shares of Telecom yet.

“I don’t know, I swear, I have been selling some, and perhaps there are still some, but I do not know exactly how much”, he told CIN.