A CIN reporter Sadeta Bajrović won the UNICEF award for media contributions for protection and promotion of the rights of the child in BiH for a story about children suffering from a rare and incurable disease who were denied the right to treatment by the bureaucratic government. 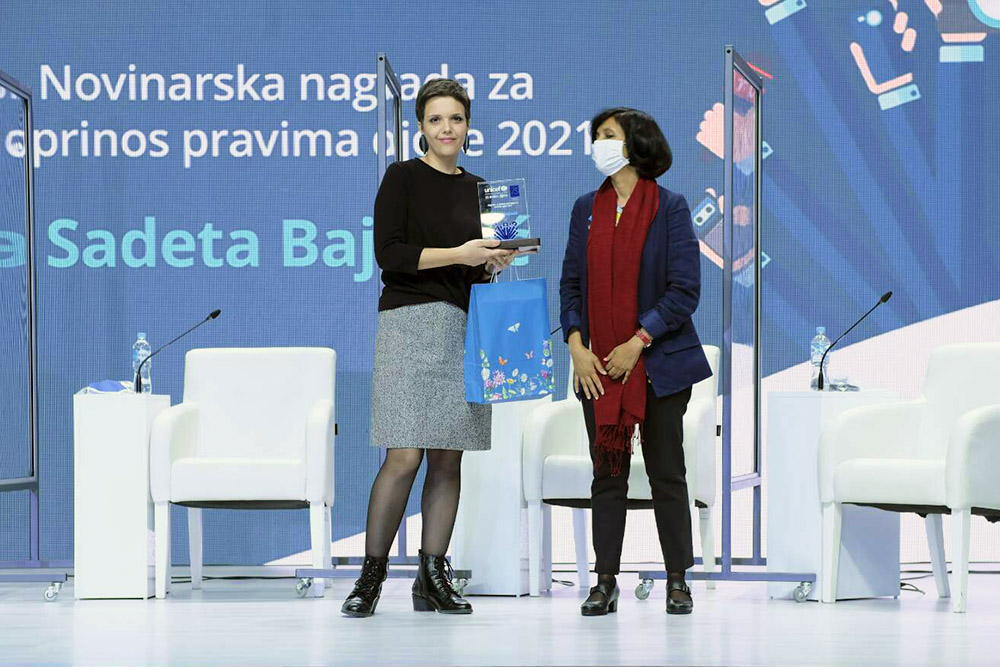 The story “Fighting Bureaucrats for Children’s Lives” by Sadeta Bajrović, the journalist of the Center for Investigative Reporting (CIN) won the UNICEF Award for media contributions for the protection and promotion of the rights of the child in Bosnia and Herzegovina (BiH).

Denis Bojić from Banja Luka received a special acknowledgment for his contribution to the rights of the child and persons with disabilities for his film “Some new Broadway”. Acknowledgments for individual contributions to the protection and promotion of the rights of the child in BiH in 2021 were presented to Željka Perišić Ninković from Banja Luka, Slavko Klisura from Goražde, and Jasmin Ligata from Sarajevo.

The award was presented today in Sarajevo, at the conference “Remembering the Past to Imagine the Future” organized by UNICEF BiH on the occasion of International Children’s Day and the 75th anniversary of this organization.

The awarded story is about children in the Una-Sana Canton (USK) who suffer from a rare and incurable disease – cystic fibrosis, and their parents’ struggle with the bureaucratic system for expensive medicines necessary for the treatment of this disease.

Fighting Bureaucrats for Children’s Lives
Children suffering from cystic fibrosis in Una-Sana Canton have been waiting for months for the Health Insurance Institute to approve expensive medicines. While waiting for approval, the health condition of some has deteriorated and some have moved abroad.

If not treated regularly, this disease may culminate in infections, pneumonia, and breathing problems, and the resulting accumulation of thick secretions leads to failure of other organs. Irregular therapies shorten the life span of the patients.

In BIH, 51 patients suffer from this rare disease. Their treatment, health condition, and life expectancy depend on the part of the country in which they live. The patients in the Republika Srpska have all the necessary therapy provided at the expense of the budget, while in some cantons of the Federation of BiH they receive no assistance for basic medicines either.

Seven children from the Una-Sana Canton (USC) who suffer from cystic fibrosis have waited for half a year for the Cantonal Health Insurance Institute to approve medicines that cost more than BAM six thousand a month.

This is not the only time they waited for the medications, but it is so far the longest. Their parents then confirmed to CIN that the medications come with at least a month or two delay each year. In addition, the Institute requires them to submit extensive medical documentation each month confirming their children’s need for medication for this incurable disease.

While waiting for bureaucratic approvals, parents have been exploring various ways to ease their children’s pain without medication– ventilation using a sterile mixture of salt and water or borrowing medication from parents from other places.

In the last few years, six children suffering from cystic fibrosis from the USC and their parents have left the state. Among them is thirteen-year-old Benjamin Semanić, about whom Bajrović wrote in the award-winning story. Earlier this month, Benjamin went to Germany with his mother Almedina Semanić because he could not get proper medical care in BiH.