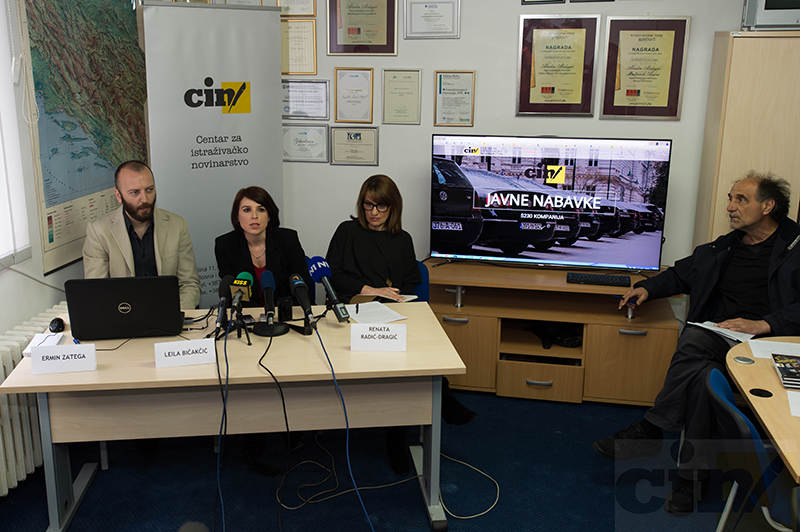 The Center for Investigative Reporting in Sarajevo (CIN) has created a unique online database about public procurement to give citizens insight into public spending and to show with whom government institutions and public companies are doing business when it comes to buying goods or services or doing public work.

The database features records of 39,178 contracts concluded among 828 government institutions and public companies with 5,230 companies. The value of the contracts is at least 6.2 billion KM.

At the press conference today in Sarajevo, CIN director Leila Bičakčić said that public procurement is an area that deserves citizens’ full attention, both for the amount of money being spent and because of frequent complaints of corruption and lack of transparency. She said that the database will be the basis for in-depth investigation into public procurement by CIN in the future.

“CIN decided to analyze processes, procedure and actors in the sector and to inform the public about what’s really going on in there in a series of investigative stories: how transparent is procurement? Are bids fair? Is political favoritism the key and what are BiH citizens paying for – quality or political games?” said Bičakčić.

Editor-in-Chief Renata Radić-Dragić said that entering information into the database took the resources of the CIN newsroom for around six months. “We have entered into the database the names of institutions and companies that got the contracts, the ways in which deals were made, the subject of each contract and its value.”

Ermin Zatega, a reporter who worked on the database, said that the most money in the past four years was spent in the energy and public health sectors. “Three publicly-owned power utility companies and all their connected firms have spent nearly 2.1 billion KM combined or one third of the total amount recorded in our database. This was followed by medical equipment and materials that have cost the taxpayers more than one billion KM,” Zatega said at the conference.

He said that most money, or about 1.4 billion KM, went to Sarajevo-based firms alone or in consortium with other companies. Banja Luka-based firms earned more than one billion KM, Mostar-based firms got contracts worth 534 million KM.

Reporters found among the winners of public contracts firms owned or co-owned by politicians. Their firms were awarded 295 contracts worth 103.8 million KM for procurement of cars, fuel, medicine, hotel accommodation, construction and forestry work. The database is available at CIN’s page www.cin.ba/javnenabavke. It is free of charge and mobile app compatible.