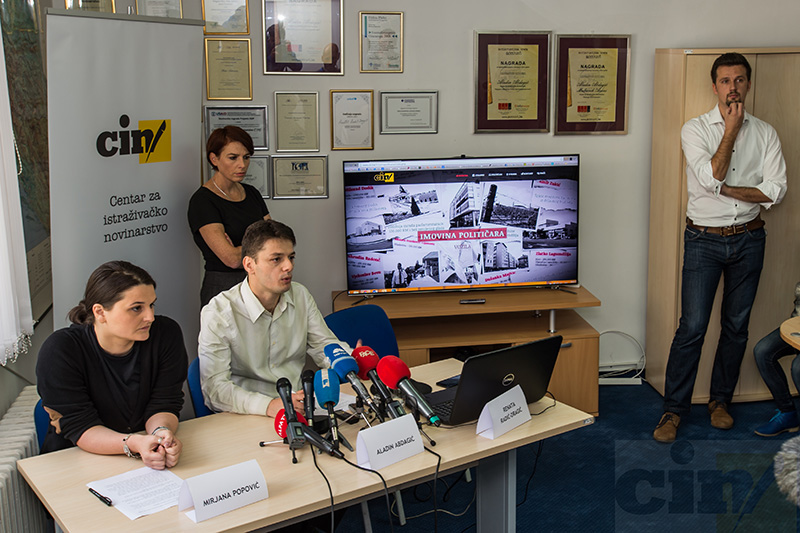 CIN reporters worked for nine months to compile the unique database, which contains records on the political and professional careers, real property, savings, vehicles, shares, loans and court proceedings of 160 legislators, ministers and other elected officials.

“CIN reporters have collected more than 2,700 documents, including all asset cards from the previous and current election year, land records, court rulings, indictments and other official documents,” said CIN’s editor-in-chief Renata Radić-Dragić at the press conference.

Of the 160 politicians in the database, nearly a hundred are running for office in the coming October elections. Of those, 51 declared savings worth more than 5 million KM. At least half of the latter group had savings growing at a steady pace. Some of the incumbents entered politics with no assets.

“In the coming period CIN will publish several stories about politicians who have acquired formidable property holdings as politicians. Along with this, we will regularly update the database with new information and documents,” said CIN reporter Aladin Abdagić.

He said that when the latest data is compared with records from four years ago, the rise of the officials’ salaries – especially the state MPs – is noticeable.

Along with the said documents, the database includes biographical information on each politician. The reporters have conducted more than a hundred interviews, but some politicians refused to talk about themselves or avoided contact with CIN reporters.

“Many agencies replied to us within the legal deadline with complete records. However, with some of them we had great trouble, because we had to keep insisting on an answer for months on end, and some refused our request,” said CIN reporter Mirjana Popović.

Access to the politicians’ information was made more difficult after the Central Election Commission withdrew politicians’ asset cards from its web page in 2012 because of the Court of BiH’s ruling on personal data protection. For this reason, the asset cards from 2014 are not available either.

CIN reporters have accessed the politicians’ asset cards, copied the data into forms that contained no personal records, and published them in the database.