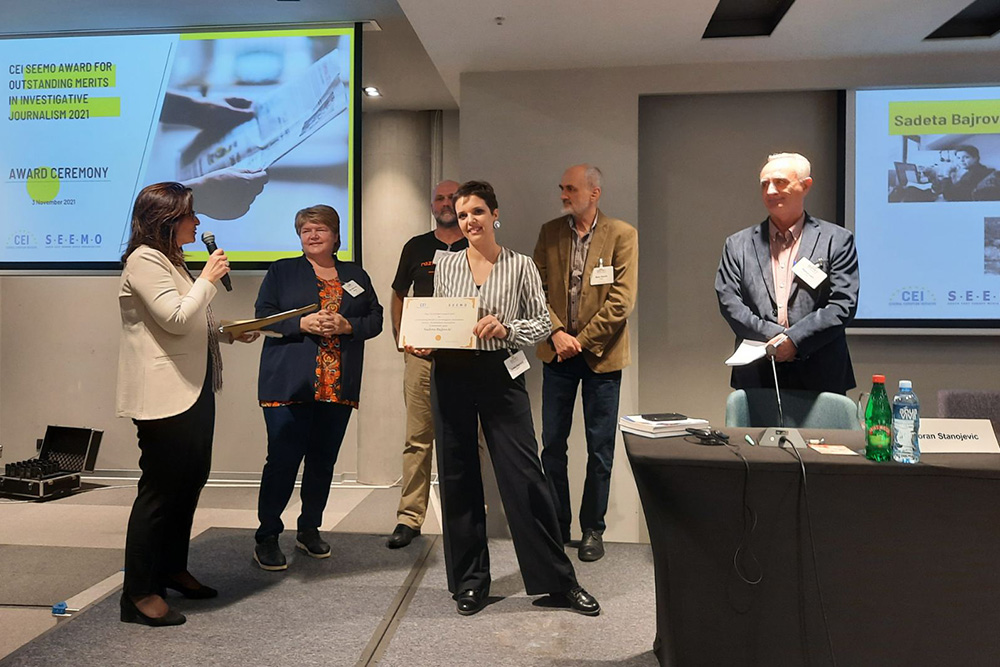 Sadeta Bajrović, a journalist at the Center for Investigative Reporting (CIN), is the winner of the 2021 journalism award presented by the South East Europe Media Organization (SEEMO).

Bajrović had been voted the best professional journalist and was prized for outstanding merits in investigative journalism for her stories “Citizens finance harmful private businesses” and “Fighting Bureaucrats for Children’s Lives”.

Milica Vojnović, a journalist at the Crime and Corruption Reporting Network – KRIK, Serbia, is the winner in the “Young Professional Journalists” category, for several investigative stories about organized crime. A special mention was received by Nermina Kuloglija, a journalist at the Balkan Investigative Reporting Network (BIRN) in Bosnia and Herzegovina, for the database she produced during the pandemic comprising public procurements across the country related to medical equipment, and Vlad Odobescu, a freelance journalist and member of the Romanian Centre for Investigative Journalism, for his contribution to an investigative project on the vulnerabilities of mobile workers at a time of Covid-19 pandemic.

The awards were presented at the international media conference “South East Media Forum” (SEEMF) held on November 3, 2021, in Belgrade.

The award-winning story “Citizens Finance Harmful Private Businesses” explains the system of financing electricity generators from renewable sources, the way of collecting money from citizens through electricity bills, and the damage that electricity generation plants cause to nature. The investigation has shown that the incentive scheme has turned power generation into a lucrative business with little investment and even lesser care for the environment.

Over six years, the Entity authorities paid at least BAM 207 million in incentives, mostly to private companies, for the generation of the so-called “clean electricity”.  These companies own 525 small hydro, wind, solar, and biomass, and biogas-fueled plants, which generate about two percent of the country’s total electricity generation.

The citizens interviewed by the CIN journalist did not know that they were incentivizing the work of these plants, and the reactions after the publication of the story showed that many citizens for the first time learned about who gets the money from the fee they pay every month with the electricity bill. The more the plants are entitled to incentives, the bigger the electricity bills of the citizens.

The second story is about children in the Una-Sana Canton (USK) who suffer from cystic fibrosis and their parent’s struggle with the bureaucratic system for expensive medicines necessary for the treatment of this severe and rare disease. Seven children had waited for months for the Health Insurance Institute to approve their medication. While waiting for approval, the health condition of some has deteriorated and some have moved abroad.

If not treated regularly, this disease may culminate in infections, pneumonia, and breathing problems, and the resulting accumulation of thick secretions leads to failure of other organs as a result of which the whole organism gets tired and weak. Irregular therapies shorten the life span of the patients.

Their parents confirmed for CIN that the medications come with at least a month or two delay each year. In addition, the Institute requires them to submit extensive medical documentation each month confirming their children’s incurable disease. While waiting for bureaucratic approvals, parents have been exploring various ways to ease their children’s pain without medication– ventilation using a sterile mixture of salt and water or borrowing medication from parents from other places.

In the jury’s explanation, these works were said to have brought attention to the socio-economic impact of the coronavirus pandemic on people’s lives, especially by researching topics focused on young people, minority groups, and people with disabilities. CIN’s research was named the best in a competition of 30 research stories from 14 countries.