Those sentenced to short prison sentences in BiH can buy their way out. Corrupt officials and others have been quick to do this then return to jobs where they broke the law in the first place.

At the end of 2016, officer Vedran Matović was sentenced to eight months in prison on corruption charges. That sentence was commuted to a fine and he did not have to go to prison. But he was fired. Now, he might get his job back because he won a lawsuit against his employer, the Tuzla Canton Ministry of Internal Affairs.

The court ruled that there was no reason to fire Matović because he had not been sent to prison.

Bosnia and Herzegovina (BiH) allows convicted people given short prison terms to essentially buy their freedom by exchanging their prison time for money. Over two years, the courts allowed convicts to buy 263 years’ worth of prison time for nearly 9.3 million KM.

Courts have calculated a day in prison to be worth from 13.8 to 100 KM. Reporters from the Center for Investigative Reporting in Sarajevo (CIN) found that the full sum has not yet been paid and some convicts delay payment or pay in installments. 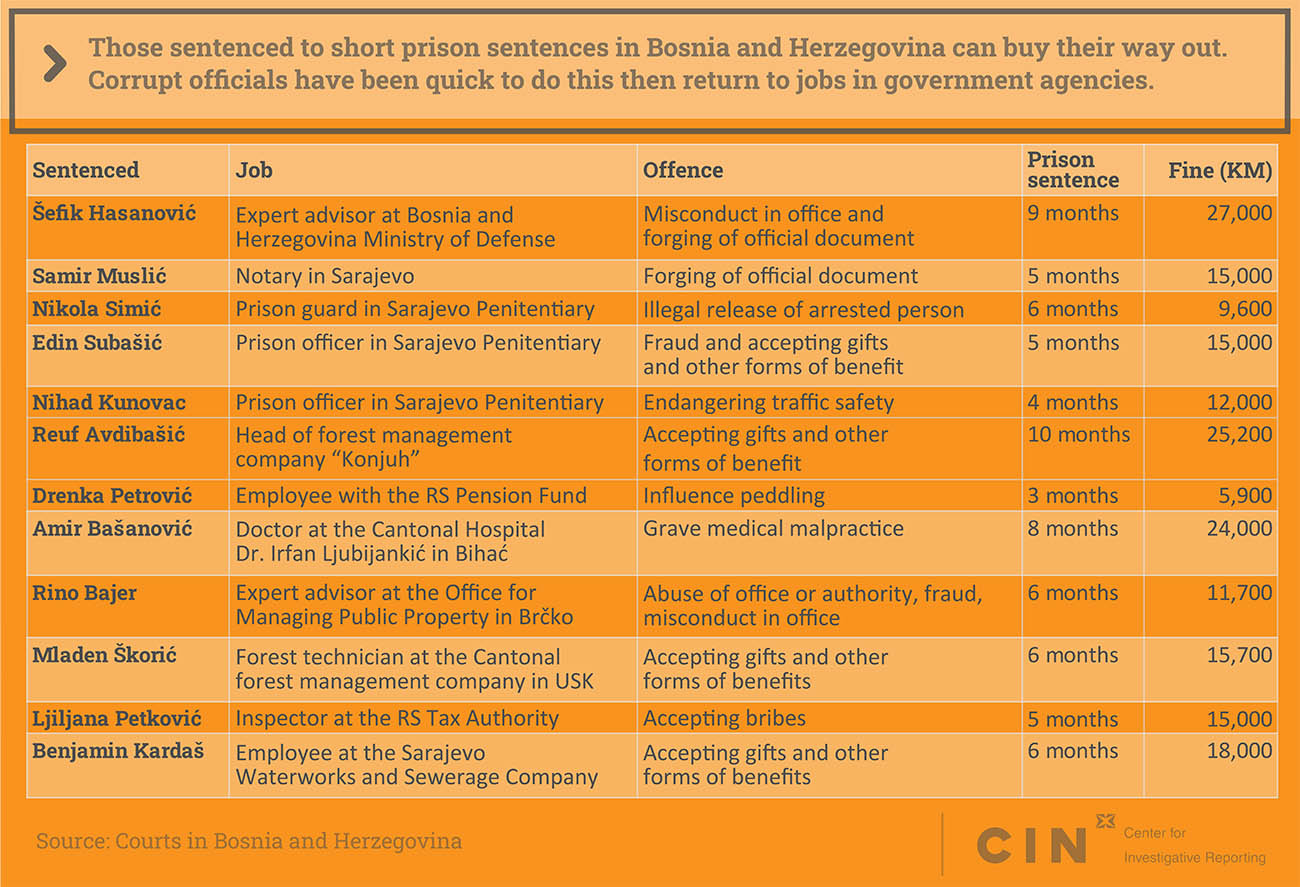 Officials and government employees – mostly convicted on corruption charges — are among those who have bought their way out of prison. Half reached plea bargains with prosecutors – that is, they admitted guilt in exchange for lenient sentences they could have commuted and remain free. And some returned to the jobs in which they committed crimes.

Return to the Police

The Tuzla Canton Prosecutor’s Office accused Matović and three other officers of abuse of office and taking bribes from local bus operators. For these crimes, the law stipulates a sentence of up to five years in prison. Matović did not wait for a verdict. He offered to plead guilty and testify against his colleagues in exchange for a prison sentence of eight months. Both the prosecutor’s office and the court accepted the plea bargain and Matović was sentenced in December 2016.

Afterwards, he asked for his prison sentence to be commuted to a fine and the court ordered him to pay 16,100 KM.

The option to commute a prison sentence into a fine was introduced in order to ease prison overcrowding. The length of sentence that is allowed to be commuted, the amounts and payment procedures are not unified at the level of BiH. Between 2014 and 2016, amendments to the state, the Federation of BiH and Brčko District laws have required courts to approve any and all requests for commuting prison sentences of up to a year.

Previously, the courts could review the circumstances of each request and make a decision for commutation accordingly.

After he was convicted, Tuzla police fired Matović with an explanation that having committed the crime made him unworthy to do police work. He sued the police and asked to be returned to his job. The municipal court in Tuzla upheld his lawsuit. According to the Law on Police Officers in Tuzla Canton, those sentenced to prison for more than three months must be fired on the day their sentence is executed. As the court saw it, Matović didn’t start a sentence and no sentence was ever going to be executed because of the commutation. The legal conditions for job termination were not met.

The Tuzla Canton Attorney General’s Office has appealed the ruling at the Cantonal Court in Tuzla. If the appeal falls flat, Tuzla Canton police will have to give Matović back his uniform and the position he abused by taking a bribe. It will also have to pay his salary and the benefits retroactively.

Matović’s lawyer Amir Morankić said that politicians created these rules for their own sake. “If something happened to them and if, God forbid, they got sentenced up to a year, that they could pay for (their way out).” He added that not everyone can afford to have their prison time exchanged for money. “The prisons were made for paupers; the courts are for paupers, while rich thieves have hotels of high category,” he said.

Unlike Tuzla Canton police, some government agencies and public institutions where other convicts have jobs did not even raise eyebrows about them returning to work.

In mid-2017, Dr. Amir Bašanović from the Cantonal Hospital in Bihać was sentenced to prison for failing to provide adequate medical assistance to 8-year-old Benjamin Redžepović. His parents brought the boy to the hospital bleeding, feverish, and in pain after surgery to remove his tonsils. The doctor, according to the verdict, failed to conduct necessary check-ups and to hospitalize the child. Instead, the boy was sent back to Mutnik, a village near Cazin many kilometers away, where soon after, he died.

For this crime the law stipulates between one and eight years of prison, but the court took into account the doctor’s family and lack of criminal record and he got only an eight-month sentence. Later, he got the court to commute his sentence to a fine and he paid 24,000 KM. Bašanović refused to talk to CIN and said he did not want to be reminded of that part of his life.

The cantonal hospital held no disciplinary proceedings against the doctor. Its officials said that Bašanović was suspended for a month following the tragedy. The chief of the hospital’s director’s cabinet, Almir Kovačević, said that they were waiting for results of the criminal proceedings. According to the FBIH Labor Law, an employee convicted to more than a three-month prison sentence will be terminated on the day “he starts serving the sentence.” This as in Matović’s case, did not happen because both of them bought their freedom.

“Considering the above mentioned provisions …we cannot terminate his labor contract,” said Kovačević.

Bašanović’a lawyer Alaga Bajramović agreed. “In my opinion, the court handed down a new verdict which commuted the prison sentence into a fine and this is now a new sentence.”

Fata Nadarević, president of the cantonal court in Bihać where the sentence was commuted, had a different opinion. “When it comes to employer, in fact, this decision on commuting a prison sentence into fine should not matter,” he said. “Only the verdict that established the existence of the criminal offense.”

The boy’s mother, Irma Redžepović, was shocked when CIN reporter showed her documents about the commutation and a receipt.

“According to this, a life means nothing…Someone pays to sit at home, while that child is gone,” she said sobbing.

The option to commute prison time to a fine is a boon to repeat offenders. Former FBiH legislator Hasan Samardžić bought his freedom twice for a combined sum of 37,000 KM.

First in the summer of 2014, he admitted to prosecutors, he and then director of the Odraz Foundation, Ivan Knezović, asked businessman Boris Horvat for a bribe in order for the foundation to give him a World Bank loan. The law stipulates a sentence of up to five years for this crime. 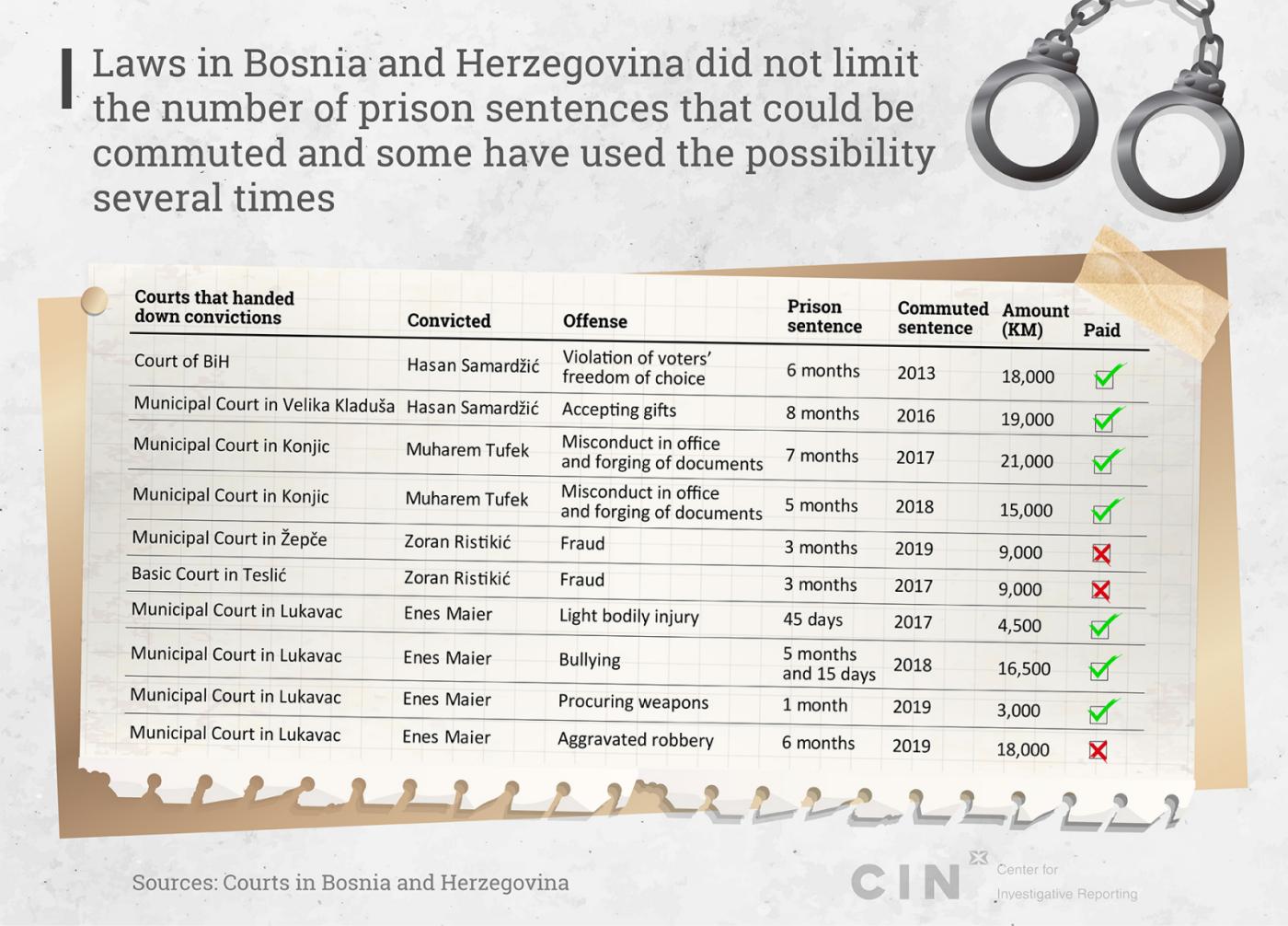 Samardžić told CIN that he made an agreement with the Prosecutor’s Office of Una-Sana Canton to get a punishment that he could pay for. “Because I knew that I could have commuted to money a sentence up to a year,” said Samardžić.

In the beginning of 2016, he was sentenced by the Municipal Court in Velika Kladuša to eight months in prison. He paid 19,000 KM to get out of serving that time.
Prosecutor’s spokesperson Irena Marjanović wrote to CIN that all prosecutors went along with the agreement and that the commutation of punishment “is not important in deliberating the guilt.”

Businessman Horvat did not want to speak about it. “I’m not going to expound on this,” he said curtly. “There’s no state; there’s no law”.

Samardžić had had previous run-ins with the law. In mid-2013, the Court of BiH sentenced him to six months in prison because in the days before the 2010 General Elections, he offered Cazin voters 100 KM to vote for him and other candidates from the People’s Party Work for Betterment. Following the elections, he became a legislator in the FBiH Parliament. He said that on the proposal of his lawyer, he asked to have his sentence commuted to 18,000 KM.

Nadarević said that the case of repeat offenders shows that commutations should be an alternative only after the courts looked into the nature of a crime, the way it was committed and its consequences: “If it’s a case of repeat offender, it doesn’t make sense to commute his prison sentence into a fine because you will miss the point and the goal of the punishment.”

Asked by a CIN reporter if it pays off to commit a crime, Samardžić said: “It didn’t pay off because only later did I find out that a sentence of up to a year can be commuted to community service,” said Samardžić. “That’s much better option, you don’t have to pay for anything. I wouldn’t be ashamed to do community service either.”

One Day in Prison for 22 KM

Unlike the rest of BiH, in the Republika Srpska (RS) a prison sentence of up to six months can be commuted only if the crime had been committed before the summer of 2017 when a new RS Penal Code erased this option. A court may grant or turn down a request. In case it grants the request, it may decide on a very low price for how much a prison day is worth and allow payments in installments.

The Basic Court in Doboj assessed the worth of a prison day at 22 KM for the former director of Doboj Penitentiary Milorad Novaković and his assistant Mirko Blažanović, based on their pensions and loans. At the end of 2015, they were sentenced for taking bribes for hiring and providing convicts with furloughs.

A plea bargain is an arrangement used to speed up court cases because a verdict is reached after a short procedure without the need to substantiate the facts. A prosecutor and a defendant or his lawyer negotiate the severity of a sentence and other details, and the court hands down a ruling. It was introduced in BiH legislation in 2003 after the judicial reform.

They could have received between one and eight years, but after a plea bargain with the District Public Prosecutor’s Office in Doboj, the court handed down sentences of six and four months respectively. Since they’d already spent two months in jail, Novaković paid 2,641 KM and Blažanović 986 KM not to serve additional time.

Lawyer Mirko Dabić said that the RS law should get back the possibility for commuting a prison sentence into a fine for all crimes sentenced up to a year in order to harmonize the legislation in the country. He believes that fines have a punishing effect. “More funds are provided from those minor offenses, mainly those are traffic accidents, and the number of incarcerated is decreased,” said Dabić.

A CIN reporter countered that documents show that public officials in the RS who commuted prison for fine were mainly sentenced on corruption charges.

“It is another matter that corruption offenses should be more severely punished,” said Dabić.