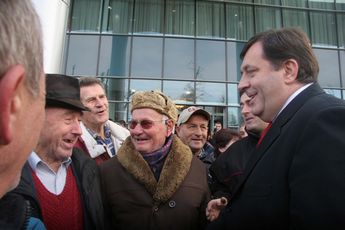 A controversial report by the State Investigation and Protection Agency (SIPA) report outlines widespread corruption in contracting for construction of government buildings and roadway in the Republika Srpska (RS), but it contains flaws and omissions that leave some of the report’s claims open to question.

Prime Minister Milorad Dodik has continued to brand the investigation as politically motivated, but without addressing the report’s extensive details that show extravagant spending, massive cost overruns and his role in keeping some of the spending confidential.

The full investigative report has not been made public, but the Center for Investigative Reporting in Sarajevo (CIN) has obtained a copy and reviewed it.

News of the report first surfaced two months ago and prompted an angry denial by Dodik. The investigation began last year after a government audit found abuses in the way the RS put contracts out to bid and questioned special consideration given to Integral Inženjering.

A few of the more questionable items include a 1,734 KM wastebasket, 1,294 KM table ashtrays and a 48,665 KM conference table, all for the new government center, and a contract for roadwork and tunnels steered to Integral, who, according to a competitor’s lawsuit, did not qualify for the bid and because it had not built a highway before. The work overran the deadline and cost much more than the contract, and Dodik abused his power by improperly proposed additional work, investigators wrote.

The report outlines a series of other charges, many of them criminal, involving 15 people. The findings covered actions including bid rigging, unnecessary cost overruns and even a suggestion of money laundering, principally on the construction at the new RS Government building and the ABC complex, the Radio and Television of RS building and the construction of E 661 section of the Gradiška – Banja Luka Highway.

Accusations of Abuse of Office

The SIPA document provides a portrait of a political administration and governmental structure enmeshed in questionable contracting and accuses Dodik and others of abusing their offices.

Investigators named Dodik and Integral Inženjering founder Slobodan Stanković as important members of the 15 accused of wrongdoing in the report. They, investigators wrote, worked together to inflate prices and make secret deals over a 5-year period. Implicated as members of the ‘criminal group’ are Stanković’s wife, Slavica, director of Integra Inženjering, and a range of current and former government officials and public figures, including Fatima Fatibegović, Minister of Physical Planning, Construction and Environment; Dragan Kokanović, President of the Commission for Monitoring RS Radio and Television Building Construction Activities; and Mladen Lazendić, director of the public company Putevi RS. CIN has written about Stanković’s role as a favored bidder in the RS.

Some of the largest expenses stemmed from construction of portions of the E 661 Gradiška -Banja Luka Highway. The report said Stanković was a member of the council that appointed a commission, which, in turn, selected the winning bid. The commissioners selected Integral’s bid. The contract, for 43 million KM, was for 4.7 kilometers of highway, Klašnjice and Laktaši tunnels and seven bridges. Investigators referred to the competitor’s lawsuit that said his company did not meet minimum bid qualifications and had never done such work before. The suit has been rejected by the Supreme Court of RS.

The 2002 contract that Integral had won stipulated that the ‘value of the works and the accepted unit prices would not be subject to change.’

Investigators wrote that they could not determine what work had been done from documents available.

The contracts signed with Integral did not stipulate any penalties for not finishing the work on time, which would have resulted in a 3.6 million KM fine, money that taxpayers would have to make up.

Another key piece to the investigation was contracting for the new government buildings in Banja Luka. Investigators focused on longstanding allegations that Integral received more than 49 million KM in extra payments on furniture and interior design for the Ministry complex buildings and the RS Government building in Banja Luka, including high-end pieces from Italy and a bar unit with refrigerator for each of the 15 ministers’ offices.

The report includes a statement that on April 3, 2007, the RS Ministry of Spatial Planning, Construction and Ecology approved the extra money to cover ‘additional and unforeseen’ expenses that Integral incurred while building the RS Government headquarters.

Such expenses included wall linings, fire prevention apparatus, paintings, flooring and furniture – necessities, investigators wrote, of any office building, and elements that should have been put out to bid.

The original contract and the addendum were made confidential by special order of Dodik, the report said.

Also, investigators said, Integral charged the government 23 million KM for furniture for the two buildings, adding an extra 7 percent ‘assembly’ fee for every item purchased, including tables, ashtrays, waste baskets and other items that need no assembly. Also included was a 4 percent delivery charge that was added to the cost of each item.

The report acknowledges that precise figures are difficult to establish, because record-keeping made an exact tally impossible, but investigators wrote that Integral got a profit of several million KM from the deal.

‘Given that we do not have at our disposal the complete documentation (invoices, dispatch notes, accounting data etc.) it cannot be established with certainty what the possible profit is in question’ the report said.

The investigation covers items from a 30,210 KM love seat with extra leather to 1,225 million KM for fountains at the government building.

The investigation attempts to demonstrate how the government of the RS funneled business and contracts to companies owned by Stanković and his wife, who benefitted from RS work and who, along with her husband, failed to report that she should have paid 7.3 million in VAT tax, investigators wrote.

Support for Some Claims not Complete

The allegations contained in the SIPA investigation are not fully supported in all cases.

Out of the tens of millions that the report contends was taken, none of the cash was linked to Dodik or others named in the reports, except for Stanković.

One of the report’s claims, that Stanković may have laundered nearly € 845,000 through a Brussels company without buying anything, did not hold up under further reporting.

Investigators wrote that Integral spent money on goods that were never imported, and therefore never purchased, which they said might have constituted money laundering. They relied on official import records cited by tax officials and did not contact the company or try to obtain the actual billing documents, according to the Brussels company’s attorney.

CIN obtained documents showing that Integral made purchases from the company, and the goods were shipped to Montenegro in 2008.

Those billing records indicate bank transfers and show shipping stamps and sales for the exact amount of money that investigators said was laundered. The money was spent to buy pipes and other fittings, according to the documents, although the records don’t indicate whether the purchase had anything to do with the RS contracts.

If investigators had called furniture maker R.A. Mobili of Milan, they might have included the information that company offered to CIN: The company sold the ministry 1.93 million KM worth of furniture to fill the offices of 15 ministers. Among the items purchased were a bar unit with refrigerator for each minister’s office, what is described in furniture company invoices and the manager of one of the companies as a special clothes hook for each office, and dozens of expensive desks, sofas and leather chairs.

R.A. Mobile’s receipts show significant markups once the furniture left the manufacturer. For example, RS taxpayers paid 12,841 KM for a leather armchair that R.A. Mobile sold for 4,815 KM. Similar markups are found on items ranging from a specialty coat rack to a gold-plated desk.

An intermediary company, Vizor, from Temerin, Serbia acted as the purchaser and importer for nearly all of the furniture, including items bought from Mobili. Mobili’s invoice shows, said a manager, that the government received deep discounts – as high as 45-percent in some cases – because it bought in volume.

Savings Not Passed to Taxpayers

But that savings apparently was never passed on to taxpayers, a comparison of the discounted prices and the records show. The RS government paid full retail price for the goods, plus the extra assembly and handling fees, an examination of the SIPA records and the Mobili records.

CIN reporters asked the RS government to address the details contained in the full report. A spokesperson instead sent a previous statement from a special assembly of RS ministers held in February that said BiH agencies ‘ignored and belittled’ RS staff and said the RS may have to rethink its cooperation with both SIPA and the BiH prosecutor’s office.

‘The RS Government is aware that the peoples and citizens of the RS and BiH are upset, which is why we are asking for all the agencies and institutions to do everything to eliminate this fear and legal uncertainty that the citizens feel’ read the statement dated Feb. 20, 2009. ‘The RS Government will do everything to protect the interests, freedoms and legal safety of the peoples and citizens of the RS.’

Prosecutors received the report in February and are not expected to decide whether to seek an indictment for months. An investigative report is used by prosecutors to establish whether there is probable cause for an indictment.

But news of the investigation was welcomed by government watchdog group, Transparency International BiH, which has repeatedly clashed with the Dodik government.

Srđan Blagovčanin of TI BiH said, ‘The fact that the report exists and is submitted to the prosecutor’s offices is good news for citizens of RS and BiH. This report and what will follow will show that nobody is above the law.’