Medicine on the other side of the law

In one month of reporting, a team of  nine journalists from CIN talked to doctors, patients and health care officials to find out how medical ethics had collapsed. 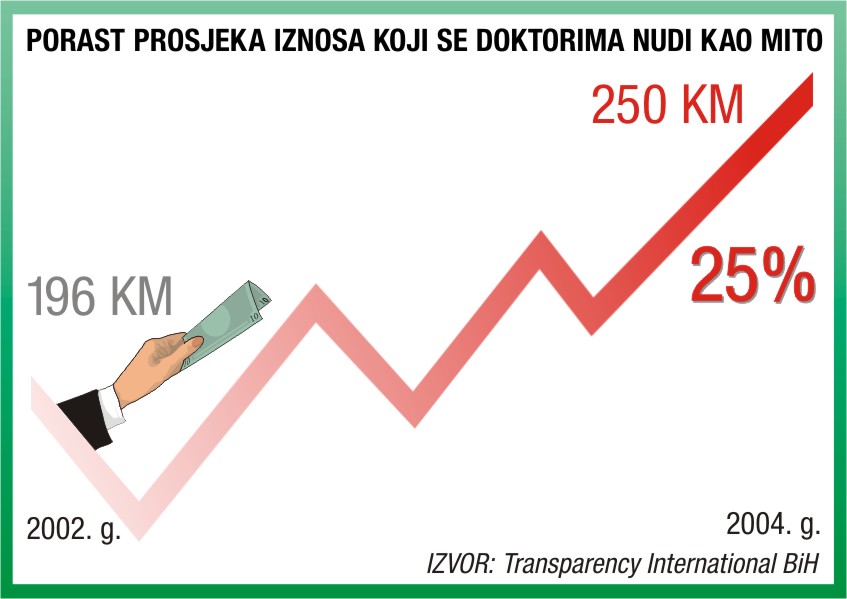 If it happened in any other profession, the people doing it would be considered common thieves and sent to prison. Charging someone again for a service he should only have to pay for once through bribery or extortion is a crime.

But most insured health care patients in BiH are quietly handing over the money to their doctors.

First, they pay for medical care with a salary deduction, then doctors often solicit an extra payment to put them first in line for an operation, and finally the patient tips the doctor after the care to make sure he is remembered favorably.

The ethical lines for doctors and patients have become blurred by desperation for medical care and low salaries for medical workers.

In four weeks of reporting, a team of nine journalists from the Center for Investigative Reporting in Sarajevo (CIN) talked to doctors, patients and health care officials to find out how medical ethics had collapsed to the point that allowed doctors and patients to slip to the other side of the law.

For the doctors the business is not a small one. Bribes can cost the patient from 100 KM to 2,500 KM, depending on the medical procedure needed, medical officials said. In a much more legally unclear area, doctors are also moonlighting away from their public jobs at private clinics they own or work for. The practice is partially legal in the Federation of BiH (FBiH) and virtually unregulated in the Republika Srpska (RS).

But regardless of its legal standing, moonlighting is helping to bankrupt the health care system with lost doctor time and doctors charging private patients for testing in public facilities, officials said.

The law in the FBiH and the RS is clear on bribery.

According to law, accepting and giving a bribe is a criminal offense for which the perpetrator may be sentenced to five years in prison. A doctor can also lose his license for a breach of the medical code of ethics.

Since the war, however, there has not been a single case of a physician convicted of accepting a bribe or losing his license for bribery, according to prosecution offices in both entities. Nor has a patient been convicted of offering a bribe.

The biggest reason why the law has not been applied is that there are few witnesses to the crime, said Marin Kvaternik, RS minister of health.

‘We all talk and we all know of things, but nobody wants to report it to police’ Kvaternik said.

Dr. Dragan Kostić, the vigorous manager of the Banja Luka Clinical Center, remembers one woman who did come to him to make a complaint about a doctor. As soon as he asked her to sign a written statement she immediately left his office.

‘The patients believe that the physicians are supporting each other, so if they run afoul of one of them they won’t be able to receive assistance in the future’ Kostić said.

But there is growing evidence that patients may be becoming bolder about resisting extortion attempts.

A Prijedor doctor will go on trial soon for allegedly asking a patient for money for ‘surgical thread’ before an operation. When the patient went to police, they used a marked KM note to gain evidence on the doctor.

Another man complained to police in Sarajevo when he allegedly was asked for 2,000 KM by a doctor who said he could find specialists for his wife’s problem pregnancy. The case has been sent to the Sarajevo cantonal prosecutor’s office.

In the most recent case, the director of Zenica Hospital complained to police after a patient in the gynecology department alleged he had been asked for 300 KM from a doctor. Police have just begun to investigate the case.

RS minister Kvaternik and others point fingers at the medical associations, which are in charge of issuing and depriving physicians of their licenses, for not enforcing ethical rules against bribery and gifts in their profession.

The regulations governing the medical associations in both entities anticipate that every physician who infringes the code of medical ethics, which is the same in the FBiH and the RS, shall be deprived of both his medical license and work permit. But there has never been a single case reported in BiH of a doctor losing his license for any reason, according to the medical associations.

Dr. Aleksandar Lazarević, the president of the RS Medical Association, claims that under the code doctors can only lose their license for malpractice, not for accepting bribes.

But the code clearly states that a physician ‘shall not take advantage of the patient either physically, emotionally or materially’ and specifically that ‘apart from the regular compensation for its work, i.e. salary or honorarium and personal satisfaction for helping the patients, he/she shall not receive any other form of compensation.’

The Sarajevo Canton Medical Association does not seem any more interested in dealing with the bribery problem.

‘We have not received any complaints on the part of citizens’ said Dr. Bećir Heljić, the association’s president. ‘We will not beg them to file the complaints against physicians if they do not want to.’

The ethical confusion over bribery is mirrored in the laws covering moonlighting in both entities.

The legal right to work and the ethical standards of the medical profession are in direct conflict in the entities.

Meanwhile, moonlighting has become a serious threat to the public health care system.

Physicians tend to leave their regular jobs during working hours to do surgeries in their private offices, explained Tomislav Lučić, the FBiH minister of health.

Sometimes they also take patients with them by suggesting they seek more care at the private facility. The public clinic or hospital ends up paying for costly tests that doctors in the private clinics also charge for.

‘It is really hard to work at two places because this job is very exhausting, physically and mentally’ said Dr. Jasminka Krehić, a member of the ethics committee of University Clinical Center in Sarajevo.

In the FBiH, health care laws protect physicians’ interests and earnings. Doctors are allowed to have private offices and to moonlight up to three hours a day.

Dr. Nedret Mujkanović, the director of University Clinical Center in Tuzla, tried to make the patient the priority by banning moonlighting entirely at the center.

Instead of basing his rule on health law, he used the labor law, which prohibits competition between an employee’s second job and his fulltime employer. The center’s doctors complained to the Tuzla office of the FBiH Ombudsman, which ruled against Mujkanović. But the minister of health overruled the ombudsman and Mujkanović’s ban remains in effect.

In the RS, doctors also went to war for their income rather than patient care, when a draft law banning moonlighting was proposed last year. They won when the law never made it to the parliament.

‘That makes us think about the political influence of the physicians’ lobby’ said Dr. Kostić, the vigorous director of the Clinical Center in Banja Luka who deprived all his physicians of the right to dual practice.

Kostić based his ban on the RS labor law, which also says that doctors cannot compete with their public full-time employer in the same profession. According to the labor law, doctors do not have the right to a private office as long as they are employed by the government.

The RS Ministry of Health is in charge of giving consent to the opening of private doctors’ offices and maintains a register of the existing offices. Therefore, the ministry should be able to prohibit publicly employed doctors from owning clinics.

But RS Labor Ministry inspectors conducted inspections of more than 223 private offices during the same period, according to inspector Zoran Mikanović.

‘The law prohibits competition between the employer and employees’ Mikanović said. ‘However, in reality the situation is completely different.’

According to Mikanović, moonlighting should be controlled by the health inspectors.

But doctors may not have to be overly concerned about losing their private practices any time soon.

‘Sure, there are health inspections in place, but I am not quite sure if they are capable of conducting such control (of dual practices)’ said FBiH minister Lučić.