Newspaper ads promising easy college degrees seemed too good to be true. As it turns out, the degrees are legal, but mostly worthless. 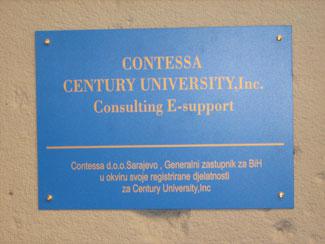 Century University USA sounded like an even better deal when reporters for the Center for Investigative Reporting in Sarajevo (CIN) called this month, posing as interested students. They could, they were told, ‘earn’ undergraduate or advanced degrees without taking classes, studying, passing exams or doing much homework. They could get credit just for having lived and college professors would be at their service to write their papers.

The only problem is that Century diplomas are essentially worthless. They are not accepted for most state service positions in BiH or for any positions through the U.S. Civil Service Branch, which hires government bureaucrats.

But the CIN reporters posing as students were told that large numbers of employers, especially overseas, don’t look all that closely at degrees anyway.

The public must beware of offers like those from Century University, because as bogus as their degrees may be, there is nothing illegal about offering them.

Century University, set up in 1978, is not accredited by any agency recognized by the U.S. Department of Education, meaning there is no indendent oversight of the quality of its courses or its faculty, or even if they have any.

Century is licensed in the state of New Mexico, but American education experts warn that the law in that state contains a troublesome loophole, which has allowed for some older institutions never properly accredited to be licensed. On its website, Century touts its New Mexico credentials and says it doesn’t have – and never sought — accreditation by the U. S. Department of Education. Instead, Century claims an alternative accreditation that education officials warn American students is not meaningful.

Century has no headquarters in Sarajevo or elsewhere in BiH. As a ‘distance learning’ school it largely conducts business through email, fax and a mobile phone number given in its ads.

That number is connected to a company called Contessa, which records show is a hair styling and cosmetics firm.

CIN staffers who answered Century’s ad talked by mobile phone to a man who identified himself as a Dr. Mirović.

One staffer presented the story that he was working with an international organization and needed a graduate degree quickly so that he could qualify for a promotion.

Mirović told him that he could obtain such a degree in two to three months. As a Century student he could pass an exam in the form of a research paper every week. He’d be told ahead of time exactly what to read, about 50 pages worth, in order to pass.

Another CIN staffer arranged a face-to-face meeting with Mirovic, posing as an older, harried student who hated to write papers and was too busy to attend lectures.

She met Dragomir Mirović at an apartment in the city center marked outside with a Contessa sign. Mirović told her that he held two advanced degrees. CIN could not confirm that.

Mirović reassured the CIN staffer that she could easily finish up her undergraduate studies and that papers would take the place of classes and exams.

He said that she could meet with him and he could help her find ideas for the papers. Or, she could pick any topic out of any book. Then, a professor from another country in the region – to insure her privacy it would not be a BiH professor — would write the paper in English. Century offers a range of paper-writing services, from simple translation of what students write into English for 20 KM per page, up to the delivery of a bound and polished paper for 500 KM.

Mirović told the staffer that some of what he was telling her in person was not public, but private. He showed her how Century sidestepped possible accusations of cheating. University paperwork that applicants sign promises only that “All academic work I submit for my degree program will be entirely the results of my own efforts, except for the use of text editors or translators if needed.” The words ‘efforts’ and ‘text editors’ allowed legal wiggle room, he said.

Finally, Mirović told staffers that a Century degree could help them if they wanted to work overseas. They could more easily secure immigrant visas to Canada, he said, and if they were invited to study at Century it would prove useful in getting a student visa valid anywhere in the U.S. Misunderstanding

CIN contacted Mirović officially after he talked with staffers and asked him about getting degrees with little real study, cheating on papers and promises of easy visas.

‘They misunderstood me’ he said.

‘I can’t tell anyone that (s)he will get visa, but if (s)he’s an American student and if the University invites him or her for further studies, of course (s)he will more likely get visa’ he said.

While he told CIN staffers that from the 700 replies to his ad he expected to end up with 70 serious students, he told CIN officially that had not signed up a single BiH student.

Almir Mašala, assistant to the minister of education in Sarajevo Canton, said that he had never heard of Century University.

The only American institution of higher education licensed to grant degrees recognized by the ministry is American University, which operates in partnership with the State University of New York, in Tuzla. AU has applied for permission to establish a Sarajevo campus as well.

Denis Prcić, chairman of the AU steering board in Tuzla, said the Century university ad was “BS.” He apologized for using a profanity, but said that the offer undermines honest American efforts to bring stability and progress to BiH.