Political party members who sit on school boards in Tuzla Canton are firing principals and appointing party peers in their place. 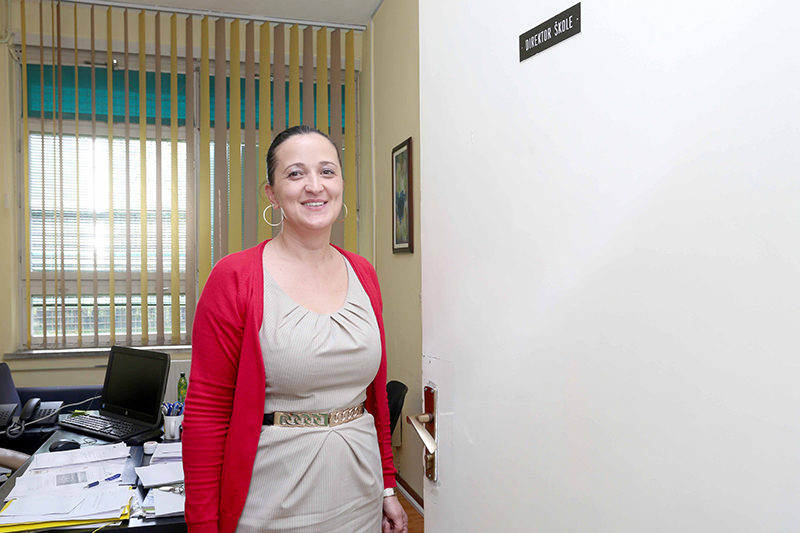 Ifat Mumić, principal of a Tuzla elementary school Gornja Tuzla, was dismissed this March in the middle of his second term, when members of a temporary school board appointed by the new government of Tuzla Canton convened. Mumić said that no one had told him why he was being replaced.

The board that fired him included neither of the two representatives parents nominated. The government appointed another person to represent the parents on the board. 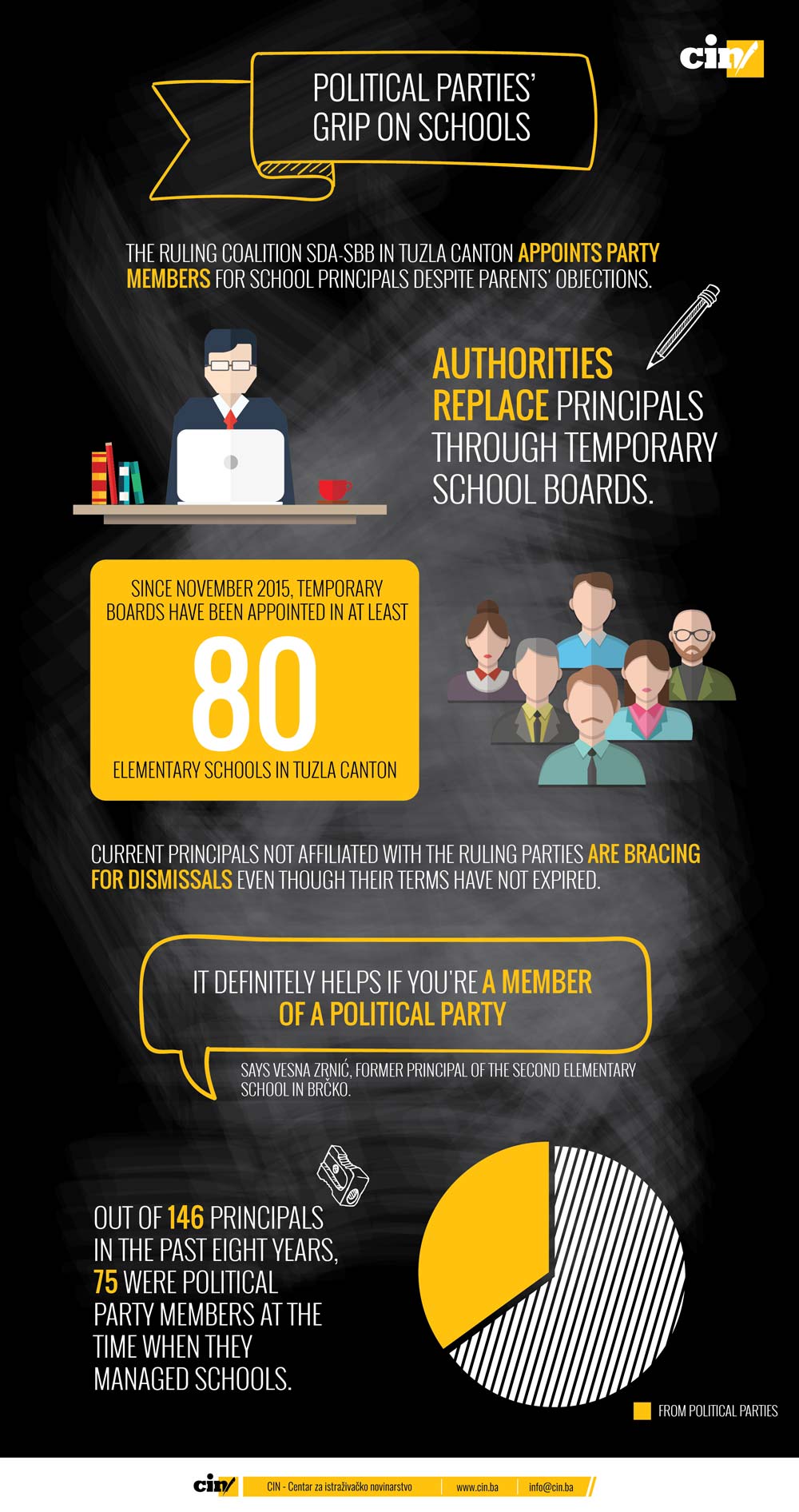 The Canton’s Anti-Corruption Commission says that the temporary school boards have not been established according to the law. Such a board for the Gornja Tuzla School appointed Azra Feukić as principal. Feukić is a member of the Alliance for Better Future (SBB), one of the ruling parties in the canton. Its coalition partner, the Party of Democratic Action (SDA), did the same in other schools.

Parents in Gornja Tuzla said they liked Mumić. “If all parents were asked to vote, they would have re-elected this principal with 80, and maybe even 90 percent of vote,” said Safet Hajdarević, one of the parents.

Since coming to power in November 2015, the coalition government of SDA and SBB has appointed temporary school boards in at least 80 elementary schools. Those boards then opened vacancies to select new management in at least 72 schools. Current principals not affiliated with one of the ruling parties are bracing to be dismissed too.

Politics intrudes into schools across Bosnia and Herzegovina (BiH). Reporters from the Center for Investigative Reporting in Sarajevo (CIN) collected records on the management of 62 elementary schools in BiH. More than half have principals who belong to political parties, CIN found. Some say that party membership does not guarantee the office, but it help. “It definitely helps if you are a member of a political party,” said Vesna Zrnić, a member of the Croatian Democratic Union in BiH and former principal of the Second Elementary School Brčko.

Party Board for Party Principal

According to the Law on Elementary Upbringing and Education in Tuzla Canton, a five-member strong school board has a say on all important issues related to schools during its four-year tenure: it signs off on the annual work plan; appoints and dismisses principals and sets school policies. Boards are made up of: one member from the Canton’s Parliament and from the local community each; two teachers and one parent nominated by the parents’ council. The final decision rests with the cantonal government which endorses nominees proposed by the Ministry of Education, Science, Culture and Sport.

The previous cantonal government in July 2015 passed a law on elementary education and upbringing that led to a change of the majority of the boards to the advantage of teachers and parents’ representatives.

The school boards were also important to the former government coalition dominated by the SDA. It had announced the vacancies for the selection of school boards and the candidates had been registered, but in the end nothing came of it because SBB joined the government that came to power in November 2015. The new government voided the vacancies only after it had first installed temporary school boards. Only then was a vacancy for filling out permanent school boards issued. Mersija Jahić, assistant to the Cantonal minister of Education and Science, says that the procedure is ongoing.

For example, the Cantonal Parliament and local community have sent to the temporary board of Gornja Tuzla School as their representatives Zijad Kulašević and Fuad Mehić, both SBB party members. Two teachers were appointed to represent the school, but the cantonal government refused to endorse the fifth member nominated by the parents. Instead, the government appointed Elvisa Hajdarević, the vice-president of SBB’s local board in Gornja Tuzla. She did not return CIN’s calls asking for comment.

“The party nominated her because her child attends the school,” said Kulašević. He said that the nominees did not submit required paperwork with the Ministry themselves, but that the party selected the nominees according to their education level.

Two teachers were outvoted during a show of hands on the dismissal of Mumić, the new vacancy and appointment of a new principal Azra Feukić, a member of Gornja Tuzla SBB board.

“Here we all politically lean in one direction or other,” said Feukić. However, she does not think that this was the case when she was voted in, even though her party colleagues were the only ones to vote for her.

”Members of the school board would not have been appointed if they were politically biased,” said Feukić.

The chairman of the temporary board, Fuad Mehić, did not want to speak to CIN. His party member Kulašević said that the party did not instruct him who to vote for. He said that he voted for Feukić because she was a better candidate: “We wanted someone from Gornja Tuzla, a woman, a younger person.”

After the appointment of the new director, some parents protested because the school board was ushered in without any candidates they suggested. They kept their children out of school for one day.

Parents CIN reporters talked with said that they were not against the new principal, but against the political appointments of principals. They were pleased with the Mumić’s work whose appointment in 2010 supported both the parents and employees.

Almira Kadribašić has been on the parents’ council for 11 years and said that Mumić secured grants for the school, while a parent Salem Terzić said Mumić planned to refurbish school floors and buy computers.

“You cannot replace a man who works like that. If parents have chosen him they should be the ones to replace him or the Ministry could replace him upon seeing some faults in his work – of which there was none,” said Terzić.

Mumić said that the temporary board has never explained to him why he was replaced. He told CIN he was not affiliated with any party and that he was replaced because, in the distribution of power between the ruling parties, the Elementary School of Gornja Tuzla was given over to SBB.

“The school board was appointed urgently and within a month it had put out a vacancy regardless of the fact that my term ends in 2018. They did not consider it at all. They just had one goal in their mind – to put out a vacancy, that is, to change the school’s principal,” said Mumić.

The temporary school board’s member Kulašević also said that parties’ affiliates have been appointed as principals.

“The rumors had it that a party candidate was appointed only here in Gornja Tuzla. However, beginning with Slavinovići, Simin Han, all schools will endorse party nominees,” said Kulašević. He added that the principals of most of the schools will come from SDA and SBB parties.

“Candidates do not come only from these two parties; there are others too. For example, Party for BiH won two schools. There are others. But, let’s say that these two are the most prevalent. SDA won the biggest number of schools,” said Kulašević.

According to the records CIN obtained, the Tuzla Cantonal government failed to respect the nominees selected by teachers and parents in at least 10 other cases. Instead, it installed its hand-picked candidates into temporary school boards.

Such was the case of Brčanska Malta school. Though never endorsed by teachers or parents, the school’s temporary board selected SDA affiliates — a parent Mirsad Mujović and a teacher Merima Hasić. Hasić said that the Tuzla Canton government selected her even though the school did not nominate her: “Frankly, I am in SDA party, but that makes no difference. I was not endorsed by the party.”

At the first session of the school board, Mujović said that he was endorsed by SDA and nominated by a local community council of Brčanska Malta. Asked to comment on this, he denied that he was appointed by the party and told CIN that he joked when he had said this during a school board’s session.

The temporary school board passed a decision to select a principal even though the then principal Sabina Jogunčić’s term (Member of the Social-Democratic Party of BiH– SDPBiH) was until 2018. Jogunčić did not even submit her application thinking that she stood no chance of winning: “I was informed that I would not be selected,” she said, explaining that most of the members in the school board were SDA affiliates.

In the elementary school Sjenjak, SBB affiliates Senad Salkić and Nermin Kasumović joined the board, as well as teacher Zumra Šahović and parent Senada Muratbegović who have never been endorsed by their constituency. The board then demanded opening a vacancy for a principal even though Damir Džafić (SDPBiH) was in the middle of his four-year term.

The Board’s president Nermin Kasumović said that the Board found no irregularities in Džafić’s work. “Frankly, we did not look for them,” said Kasumović. The board took opportunity of the legal provision and decide to put out a vacancy for a new principal.

“We thought that it needed to be put out and we put it out,” said Kasumović. Džafić said that he vetoed this decision because he considered the school board illegitimate. Džafić said he did not believe that he would remain the principal: “I expect that I will be dismissed. There will be a show of hands. The politics orders them to dismiss,” he told CIN.

Unlike him, Jogunčić did not veto a vacancy, but she did ask the Ministry of Education and Parliamentary Commissions for an explanation why candidates nominated by schools had been sidestepped. The Parliament’s Commission for Education responded that it was not authorized to interpret laws and regulations related to the selection of school board’s members.

She has not yet received an answer from the Ministry to a letter she sent in January. Assistant to the Minister, Mersija Jahić, said that the Ministry did not have time to respond. Jahić said that the boards have an obligation to appoint a principal: “They have to do it within a month,” said Jahić.

In January 2015, Tuzla Canton’s Anti-corruption Commission asked the government to change temporary school boards that did not include candidates endorsed by teachers and parents. The commission member Sabid Zekan said that temporary boards were “completely illegal.”

“The Anti-Corruption Commission took a stand and asked the minister and Ministry to respect the will of parents and teachers. As far as I know, they have not yet done our bidding,” said Zekan.

Assistant to the Minister Jahić said that teachers and parents’ nominations were not accepted entirely because these were temporary boards. When CIN reporters asked her to explain if the Law precisely stated that the temporary boards did not have to reflect the nominees of parents and teachers, Jahić said: “It does not say neither that they do nor that they don’t.”

The Anti-Corruption Commission has sent some records related to school boards to the Cantonal Prosecutor’s Office of Tuzla Canton. The prosecutors found irregularities in appointments but have not yet filed any charges.

CIN’s investigation that has encompassed 62 schools across BiH revealed that more than half of the principals managing elementary schools are politically affiliated. Out of 146 who have been principals in the past eight years, at least 75 were members of political parties.

Some of the interviewed principals told CIN that the parties did not appoint them, but that they joined the party after they were appointed. Jelica Žuljević said she did not believe that she would be appointed the principal of the elementary school Nova Bila in 2008 because she was not a party member. When she became the principal, she joined HDZBiH.

“Simply to say thank you for selecting me,” said Žuljević.