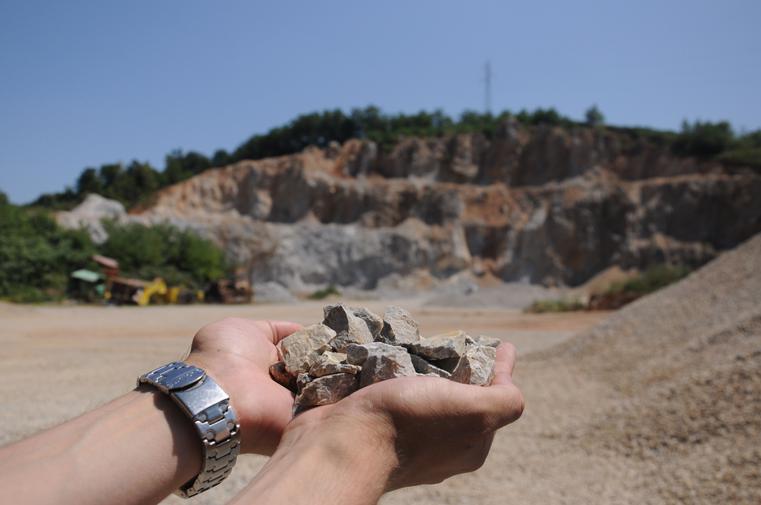 For years authorities in Una-Sana Canton have looked the other way at illegal quarrying and in doing so have relinquished concession fees for use of natural resources that could have boosted their budgets.

Some 60 quarries operate in the canton, at least half of them illegally because of lack of oversight. The cantonal government has signed contracts with the owners of 26 quarries, but most of them do not pay fees or only pay from time to time.

Far from being punished for this, their quarries still are awarded public contracts for repair projects in the canton.

They participate as stone suppliers to the construction companies, and the public agencies which put out bids most often do not require contractors to supply evidence of where they got their stone or that concession fees were paid for it.

Construction companies that a year and half ago won a bid to reconstruct roads in the municipality of Cazin used stone from the quarry operated by Rad, even though the firm owed 480,000 KM in concession fees. Rad is the concessionaire of the biggest quarry in Cazin, and it still has not paid its fees.

The municipality had earlier voided bids for the job because three other bidders had furnished fake confirmations of payment of fees.

Firms were required to file bidding paperwork and to show proof that their stone suppliers had paid concession fees until the end of 2009. The fees are computed based on a cubic meter of dug stone. The construction firms furnished confirmations for the quarries owned by Cazin-based Đuzelić, Bužim-based Beton and Ganić from Sanski Most.

Himzo Mulahalilović, former advisor for mining at the USK Ministry of Industry, the acting industry minister at the time, signed these documents during February and March of 2010.

However, Cazin officials ran a check and found that the information was incorrect.

Mirsad Topčagić, a legal consultant for the municipality, said that checks were requested because of suspicions raised by the fact that confirmation notices stated that the concessionaires had met their obligations toward the budget without giving any amounts or dates of payments.

The USK Commission for Concessions reported to the municipality that Đuzelić owed 44,463 KM, Beton 7,794 KM and Ganić 4,897 KM.

Cazin voided the tender on Aug. 10, and because of the fake confirmation notices filed a criminal complaint against Mulahalilović 17 days later. The cantonal prosecutor’s office is still looking into the allegations.

Mulahalilović denies the allegations and says that the confirmation notices were correct.

The municipality got money for road reconstruction from the International Monetary Fund (IMF). Municipality officials say that the deadline for getting funds was nearing so they asked the firms from the first tender to re-send quotes. They then chose the best.

Rad Putevi, Burgstaller and I-Selimović got the contract for 374,973 KM. These firms chose as their supplier Cazin Rad – which was the biggest debtor among the concessionaires in the canton. Representatives of these three firms told reporters from the Center for Investigative Reporting in Sarajevo (CIN) that Rad was best for the work because the quarry was close to the construction site. They said they did not check whether the supplier had met its obligations.

Topčagić said that in the second round of bidding concessionaires were not required to present confirmation notices of fee payment because of time constraints. The bid was put out for 10 days. Officials from the cantonal Ministry of Industry said that it takes two days to issue confirmations.

Lawsuits Because of Debts

A 2009 report of the Federation BiH Authority for Inspection Affairs stated that half of the quarries in the canton operated illegally, while others held concessionary licenses.

Cantonal authorities do not keep track of the amount of stone dug out from the illegal deposits.

In a 2011 report on the results of the concessions, the FBiH auditors concluded that the Federation was losing around 200 million KM a year in the area of mineral raw materials as a consequence of bad application of the concession laws.

Firms with contracts to extract stone have paid nearly 2.1 million KM into the canton’s budget since 2002. The Cantonal Prosecutor’s Office has sued 12 firms seeking to collect around 2.4 million KM in unpaid concession fees.

Concessionaires who talked with CIN said that they were not paying because cantonal officials have failed to control illegal quarrying, which they were supposed to do, according to the concession contracts. The cantonal government has closed no quarries, or punished their owners.

Amir Pobrić, owner of a Ključ-based Pobrić firm, signed a contract with the Ministry of Industry to dig stone back in 2004 but owns 35,000 KM in unpaid fees. He said that the stone from the illegal quarries is often used in public construction works since the price of legally exploited stone cannot keep up with it.

Meho Alešević, the owner and director of a Bužim Beton, said that stone from illegal quarries is cheaper on the market because firms extricating it do not pay taxes and fees.

At a May 2005 session, based on the proposal of the Chief Federation Mining Inspector, the cantonal government vowed to fight illegal quarrying.

A month later, a meeting with the concessionaires was held at the offices of the Ministry of Industry. It was agreed that the Cantonal Authority for Inspection Affairs and police would keep a close watch on the transport of stone. However, concessionaires say the Ministry has not followed up.

Nevertheless, Federation inspectors installed gates at the roads to the illegal quarries in July 2009. They also sealed them posting notices that extraction was banned. In their report, inspectors said that those benefiting from quarries were persons and firms that held no licenses, but also the owners of other – legal quarries.

Hase Hajrulahović, the current USK Minister of Industry, said that the political climate gave rise to such irregularities: “One cannot do something illegal in a society all those years without someone sanctioning it and without someone’s support.”

Illegal Quarries Are Not Subjects to Bans

Since August 2011, CIN reporters have visited the illegal quarries closed by inspectors several times. They found that the gates and notices were removed. The quarries were active.

Muradif Hairlahović, owner of the Hairlahović firm and an official with the Party of the Democratic Action (SDA), has been illegally extracting stone from a quarry near Cazin. Party members have held positions at the Ministry of Industry for 10 years. Hairlahović was an SDA councilman at the Municipal Council of Cazin between 2000 and 2004, and today is a member of SDA Cazin’s Executive Board. According to him, the quarry was closed and has not been used since May 2009. CIN reporters watch quarrying going on this summer.

Stone is also illegally dug by a Velika Kladuša firm Grupex, whose director Irfan Redžić, is an SDA member and the president of the Managing Board of the USK Chamber of Commerce. Between 2000 and 2004 Redžić was an SDA councilman on the Velika Kladuša town council.

His firm has signed a contract to exploit stones from Velika Kladuša. However, Federation inspectors found in July 2009, that Redžić’s firm was digging stone from another two illegal quarries and they closed them. Still, this summer both of them were active, and in April CIN reporters watched stone being dug from one of them.

The web page of Grupex states that it won 20 bids put out by local authorities to build local and regional roads between 2002 and 2009. Most contracts he got from the Municipality Velika Kladuša and the Una-Sana Canton Road Authority.

Redžić said that he did not use illegal quarries for public works, but only for testing. However, to test stone one also needs licenses.

Illegal quarry Pokojske Majne is located at a village near Bihać of the same name. A Muminović Bihać firm, owned by Seid Muminović, extracts the stone. He told CIN reporters that the quarry has not been worked since 2009 when inspectors closed it.

However, after reporters said that they came across several of the firm’s trench diggers and trucks removing stones, Muminović acknowledged that the quarry was active and he said he was planning on legalizing it in the future. Muminović has not yet received the concession, and his quarry is still active.