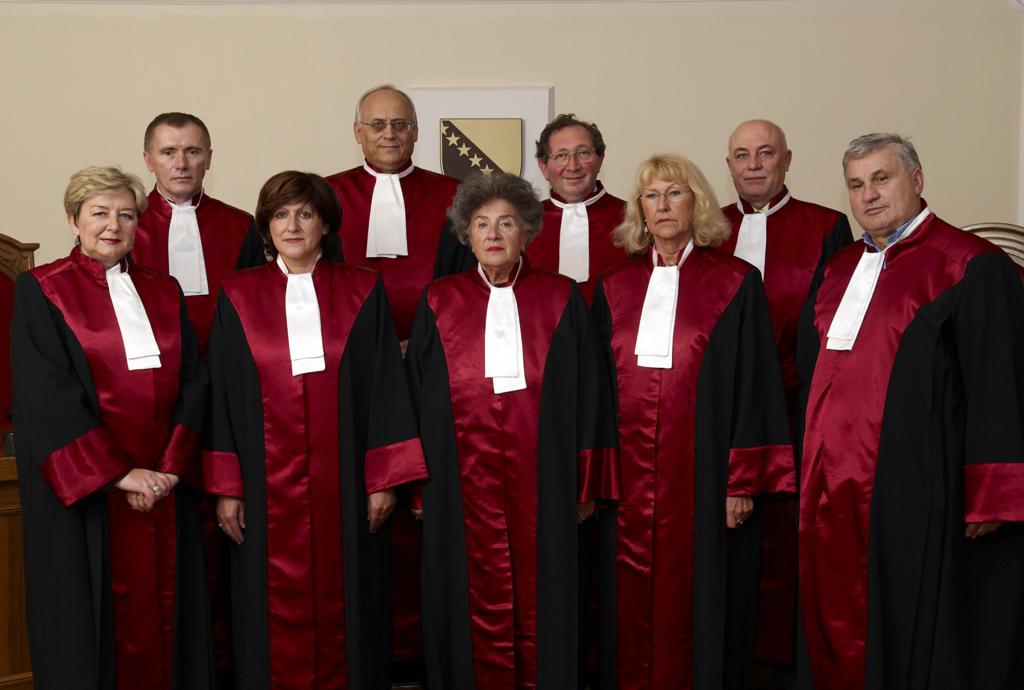 The nine judges of the Constitutional Court hold powerful, high-paying positions at the top of the court system in Bosnia and Herzegovina (BiH). They can examine and cancel the verdicts of every other court in the land, and their decisions become the model for all future decisions in similar cases. And they can serve until they retire at age 70.

But it is harder to become a legal counselor in BiH or a judge in a lower court than it is to rise to one of these prominent nine jobs. Would-be counselors or lesser judges must pass exams, have written extensively in their areas of expertise and show years of experience on their resumes. None of that is required of Constitutional Court candidates.

The Constitution set up by the Dayton Peace Agreement only asks vaguely that top judges be “distinguished jurists of high moral standing.” No law, nor any provision in the Rules of the Court, requires anything more specific.

The issue of who should be appointed to the top court is prominent once again because of a looming vacancy. Hatidža Hadžiosmanović-Mahić is retiring in August as judge and president of the Constitutional Court of BiH.

Fourteen people have applied for the job, which pays 4,200 KM a month. On June 24, the Commission for Selection and Appointments of the Federation of BiH (FBiH) Parliament will discuss the five finalists it has identified and decide which to recommend to the full body. Two of the five have superior legal backgrounds, while two are well-connected politically but have less impressive experience with the law. One has both political and professional credentials.

Picking the Qualified Over the Partisan

A lack of clear qualifications for Constitutional Court judges in the Constitution, law or court rules leaves it mostly up to lawmakers in the two entities to insure that the best qualified candidates are put on the bench.

The Parliament of FBiH selects four of the top judges; the Republika Srpska (RS) Assembly two more and the European Court of Human Rights in Strasbourg chooses three international jurists who also must be approved by the BiH Presidency.

Relying on entity-level politicians to put the best people on the court makes many people nervous. Politicians, legal experts say, have to be tempted, at the very least, to forgo the top legal minds for the candidates most loyal to their own interests.

For example, the Constitution is silent on the issue of ethnic origin of judges, yet lawmakers have adopted a strict formula in practice that does not give an individual’s professional qualifications the highest priority. The Constitutional Court always consists of two Serb, two Croat and two Bosniak judges, in addition to the three internationals.

Earlier this month, High Representative Miroslav Lajčak wrote to a working group of the parliamentary commission considering judge candidates and urged that it spell out precisely the qualifications to which the Constitution only alludes.

Judges should be appointed based on objective criteria that underline their merits, Lajcak wrote, including education, moral integrity, ability and efficiency. “Judges should be capable and experienced and properly qualified if we want an independent Constitutional Court.” He also said that better definition of qualifications would improve the transparency of judge selection and help ensure the integrity of the Constitutional Court.

The 2005 appointment of Seada Palavrić to the bench put form to fears about encroachment on the court’s political independence.

Palavrić, at the time vice-president of the Party of Democratic Action (SDA), was widely viewed as not as experienced and skilled in law as other candidates. Her competitors held advanced degrees in law and had taught university classes, according to Nurko Pobrić, a judge from the Cantonal Court in Mostar.

Nonetheless, she won the approval of the five-member work group that the Selection and Appointments Commission set up to interview the candidates and review their qualifications.

They were outvoted by the three members of Parliament, two of them SDA party members, who formed the rest of the work group. The commission then included Palavrić on a list of qualified candidates it handed over to Parliament. In a secret ballot she was picked for the judgeship.

In 2007, Krstan Simić, vice president of the Alliance of Independent Social Democrats (SNSD), the party of RS Prime Minister Milorad Dodik, was appointed to the Constitutional Court. The RS Assembly made the appointment using a procedure much like that of their counterparts in the FBiH. Simić, however, had been a prominent lawer who defended former RS president Biljana Plavšić, the most prominent political figure to be convicted of war crimes, before the Hague Tribunal.

Mahić, who is strongly opposed to the political appointment of judges, has few complaints about Simić, whom she desribed as profesional, easy to work with and someone who “observes things in a judicial manner.”

Zvonko Mijan, the acting registrar of the Constitutional Court, believes the fundamental problem in selecting good judges arises not from a lack of guidance from the Constitution, but rather the inability of members of Parliament to make sound decisions on judiciary positions.

The people deciding on appointments to the court are doctors, engineers and other professionals unconnected to law, and simply don’t know, in his view, who is the most qualified. “Had somebody put me on the commission to select a doctor, I would thank them and say I can’t do it and I don’t know how,” said Mijan.

Of the 11 members of the Selection and Appointments Commission, only one is a lawyer, Munib Jusufović, who was sentenced by the Appeals Court in Brčko in 2004 for abuse of official position while head of the Ravne Municipality in Brčko. A pardon from the BiH Presidency saved Jusufović from serving any prison time. Triggered by this case, then-High Representative Paddy Ashdown revoked the law on pardons.

Commission President Ismet Osmanović and member Muhamed Ibrahimović have master’s degrees in political science. Other members include a biologist, an ophthalmologist, engineers, a graduate of comparative literature and librarianship and a pop singer studying management at the Sarajevo University School of Economics.

How to Raise the Qualifications

In 2005, the Selection and Appointments Commission took the initiative to come up with new judge selection criteria compatible to what the High Judicial and Prosecutorial Council adopted for the regular courts in BiH, which it oversees.

This came about after the commission put out ads for a judge opening that called specifically for Bosniaks to apply. The court declared this discriminatory and unconstitutional. To amend the judge selection criteria, the court said, required a change to the Constitution.

Constitutional changes require a two-thirds vote of both houses of the BiH Parliament, a degree of consensus difficult to achieve because of political division in the country and reluctance to make structural changes that weaken the entities.

The rules are intended to regulate the daily procedures the Court follows. One such rule, for example, requires that the entity parliaments secure the opinion of the court about any candidates under consideration for appointment. Entity lawmakers are not bound by these opinions, but they can be influenced by them.

Sali-Terzić said in the same way that the court in the past has regulated the duties and role of judges and granted judges immunity from criminal prosecution, it could regulate the conditions for the selection of judges through the rules.

While experts warn of the dangers, there is little evidence that the Constitutional Court has been hindered by incompetent or politically motivated judges, just the opposite.

“I see solid legal standpoints being taken and I see real experts working there,” said Bijeljina lawyer Slobodan Cvijetić, who admits that he sometimes feels smarter than some of the lower court judges he presents cases to. He can see their mistakes. That does not happen before the Constitutional Court, he said. “There are working people who know their business.”

Similarly, Adil Lozo, a Travnik lawyer said: “Even when the Constitutional Court brings decisions that are not in my or my clients’ favor, my colleagues and I stand strongly in support of the court. We believe that the Court stands on the healthy foundation of the European Law and Convention on Human Rights.”