The president of the Republika Srpska (RS) loaded two passengers into a helicopter and took them on a ride over the Lim River, nine kilometers downstream from the town of Rudo in the east of Bosnia and Herzegovina (BiH). He pointed to the river’s canyon and asked the Russian billionaire if he wanted to invest there.

This is how RS president Milorad Dodik and the Russian investor Rashid Sardarov struck a deal two years ago to build a hydro power plant Mrsovo. Duško Perović, the third passenger in the helicopter and Sardarov’s right-hand man in BiH, recounted part of their conversation to the reporters from the Center for Investigative Reporting in Sarajevo (CIN).

After the flight, Dodik told reporters that Sardarov would build the plant. Over the next five months, the RS government went through all the motions of publishing a call for applications to award a concession license and of choosing Sardarov’ firm as the only bidder and of signing the contract.

By giving Sardarov the contract for the Mrsovo plant, the RS Government thwarted plans of the entity-run utility Public Enterprise Electric Utility of RS (EP RS) for the second time in two years. Earlier, Sardarov’s firm received a concession for the majority of the coal deposits at Ugljevik – East, which Public Enterprise Ugljevik Mine and Thermal Power Plant was exploring for years and considered its own.

“I wanted him to invest in other facilities and he asked me what. I took him here and this is the result,” said Dodik at the groundbreaking ceremony of the Mrsovo plant.

The entity-run utility EP RS based its own construction project of the Mrsovo power plant on a 30-year-old blueprint. It would finance it with its own funds.

The plan was collecting dust in a drawer until October 2011, when Serbia and Italy—with the approval and participation of the RS Ministry of Industry, Energy and Mining—reached a deal that guaranteed a higher price for electricity that came from renewable sources, reflecting higher investment costs.

Italy lacks power from renewable sources, such as hydro power plants, so it’s ready to buy it from Serbia and the RS, a BiH entity that uses just one-quarter of its hydro potential.

According to the agreement, Serbia and the RS should build 24 power plants—including Mrsovo—on their own or with investors’ funds. Italy guaranteed to pay €155 per megawatt hour in the first 15 years of the plants’ operation, which is nearly four times the market price in the region during 2013. After 15 years, Serbia and the RS will sell the power at the market prices.

Soon after the agreement was made, EP RS  made a plan for the start of construction at Mrsovo. Ten million KM was to go out over the following three years to buy land from private owners, for research and preparatory works and for setting up a firm that would hold the concession license. During 2012, the utility spent around 75,000 KM on the blueprint and a  feasibility study for construction of the hydro dam.

The plans of the public enterprise were thwarted by its founder- the RS government- which is run by members of the Alliance of Independent Social Democrats (SNSD), whose leader Milorad Dodik is also the president of the RS.

After the helicopter flight on July 9th 2012, Dodik announced that Sardarov was going to build the Mrsovo plant. Some forty days later the RS Ministry of Industry, Energy and Mining put out a public call for the construction of the hydro power plant.
< 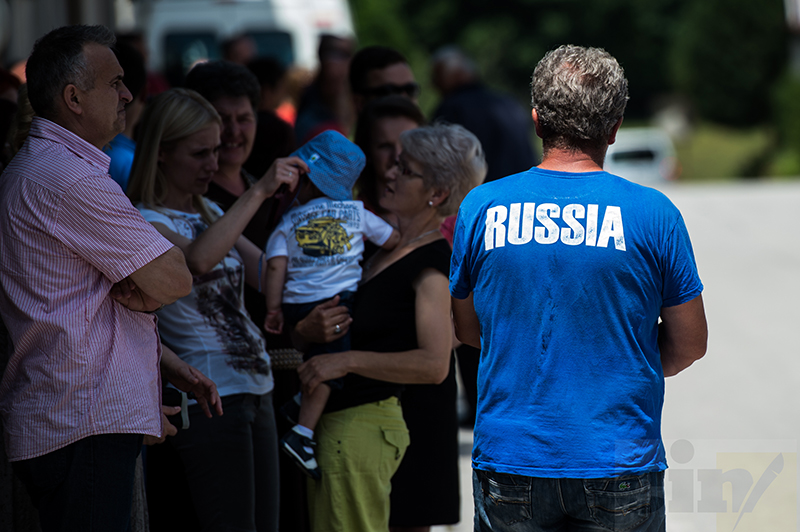 A holiday atmosphere took hold in Rudo on the day construction of the Mrsovo plant was announced June 23, 2014. (Photo: CIN)[/caption]

The call looked for a concessionaire to build and manage Mrsovo over the following 30 years. Three months later, in November, the ministry signed the concession contract with Sardarov’s firm Comsar Energy Trading. The concessionaire paid a one-time fee of 123,750 KM and will continue to pay 2.6 percent from the annual revenue in electricity sales once the hydro power plant becomes operational.

If the electricity is sold to Italians at the price agreed upon, the plant will make 42.5 million KM a year. The RS will receive around 1 million KM in concession fees.

This June, when Dodik and Sardarov broke ground for the plant, Rudo was festive. Some shops were closed, waiters offered free juices and sandwiches to the gathered townsfolk. An official program included a kolo circle dance.

“This is a gift to the municipality that has been awaiting it for several dozens of years,” said Dodik about the power plant. The Russian billionaire thanked him for his support.

“You don’t meet such an open president often. No matter what I say, he always asks us to invest ever more. To build. To open up more jobs. And this, of course, is motivating,” said Sardarov.

The Winner Known Before the Call for Applications

The Mrsovo plant is a second energy facility whose construction went to Sardarov by way of direct negotiations with RS authorities in advance of any call for applications.

According to the records CIN has obtained, Sardarov sent a letter of intent to the RS government in the spring of 2011. He asked for a concession license to mine coal and another one to construct and manage two thermal power blocks in Ugljevik, which would connect to the infrastructure of the existing state power plant.

The RS government’s prime minister at the time was Aleksandar Džombić of SNSD. The government accepted Sardarov’s offer within nine days. Almost 2.5 years later, the RS Ministry of Industry, Energy and Mining put out a call for applications for awarding the concession.

On top of this, at Sardarov’s bidding in a letter of intent to the RS government, authorities approved setting up of a firm Comsar Energy RS (CERS), two years before the call was published. CERS was founded in partnership with public enterprise Ugljevik Mine and Power Plant (RiTE). More than 98 percent of the firm belongs to Sardarov’s Comsar Energy Group LTD.

This firm is registered in Cyprus, an island state and one of the world’s many offshore havens that offer anonymity to the owners of the firms and bank accounts, which is often used for tax evasion and money laundering.

CERS first received a concession to mine coal at the major part of deposit Ugljevik – East. Having one’s own coal was put afterwards as a condition to participate in the call for applications for the construction of the Ugljevik plant.

The call was closed after for 45 days. The required paperwork included a feasibility study to be done in line with the laws on awarding a concession following a sole-source contract. This was not possible to do on such a short notice.

The RS Law on Concessions stipulates that a concession can be awarded based on a sole-source contract only if the RS Government has established that it is in the public interest to do so. That means that it is either urgent business or that only one bidder has the right to a certain methodology of doing business, according to the Guidelines for Assessing Public Interest.

In the case of Sardarov’s business deals, neither of the conditions for establishing public interest has been met.

Chairman of the RS Concession Commission Predrag Aškrabić said that the RS government decides who will be awarded a concession, while his agency only follows procedures.

“If you want someone to back you up, it is only natural that you want to attract his capital,” said Aškrabić.

According to October 2013 concession contract, CERS will build a 600 megawatt (MW) power plant and use it over the next 30 years. The plant will use more than 4 million tons of coal annually from the three deposits awarded to CERS that have a total of 118 million tons.

Construction of the plant has not yet started and Dodik and Sardarov blame problems at the local level and the paperwork necessary to harmonize the project with the European standards.

Along with these two major energy projects, Sardarov’s firms are researching the limestone deposits in the municipalities of Ugljevik and Zvornik. Limestone is needed to desulfurize smoke from thermal power plants and to build the hydro power plant.

Sardarov also owns hotels in Rudo and Ugljevik, though hospitality is not a business in which he makes his money, said Perović, director of Comsar Energy Trading. These hotels will also serve to house the construction workers building the plant.

In a short interview with CIN, Sardarov said that he did not take “a single nail” from the state and that he has built everything from scratch as well as that he’ll gladly give the contracts to another company if it can prove that it can do the same for three and a half to four years.

“If someone wants to build the facility, let him have it. I will give him the project.” 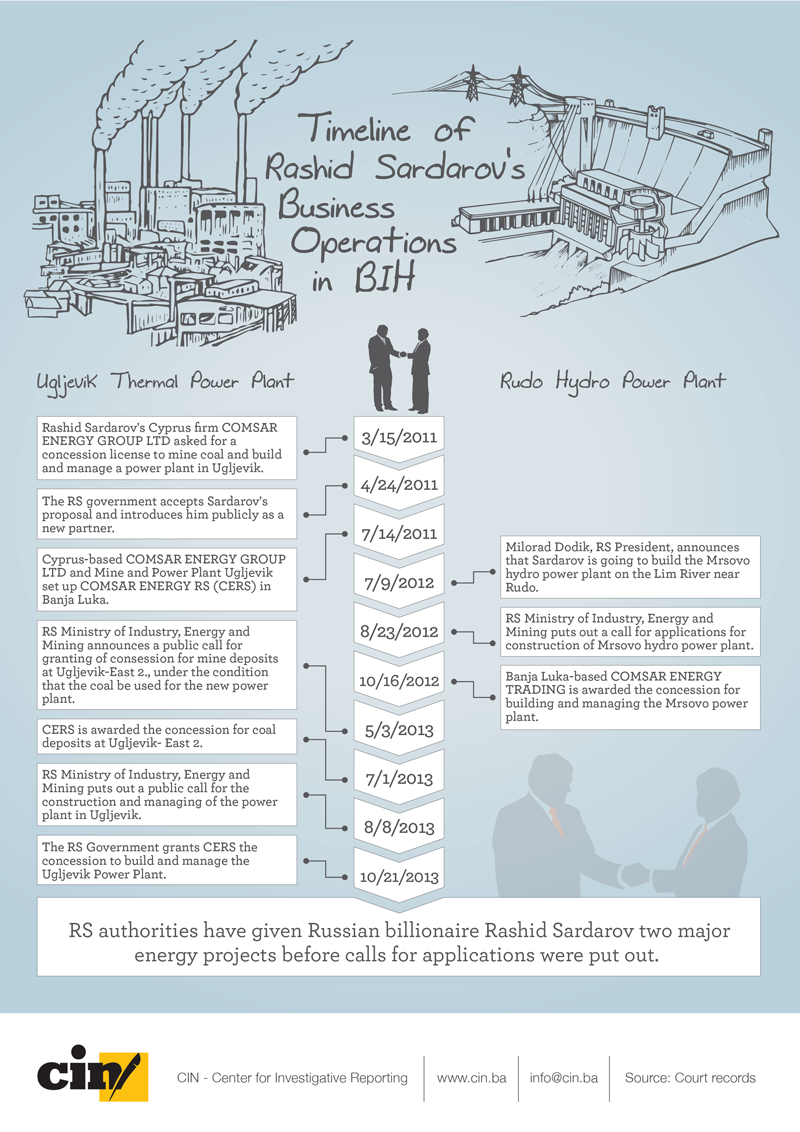 Perović told CIN that Sardarov earned his first millions in Orenburg, a Russian federal region that borders Kazakhstan. There he received a concession for mining natural-gas condensate that can be processed into drip gas to power vehicles, benzine, and light distillate.

He was processing raw materials in the refinery of the state-owned Gazprom until he built his own refinery. He established South Ural Industrial Company in Moscow in 2003. The company extracts and processes oil and gas. His wife Mariana Ljubim Bogatyrjevna co-owns the company which has around 1,500 employees and the annual revenue of about $1.5 billion.

In 2005, Sardarov expanded his business to Europe by establishing a number of companies, some of which he has since closed. In Luxemburg, with his then 22-year-old son Timur, he established Ocean Group International, a jet chartering company.

But these are all side businesses because, as Sardarov told CIN: “My main job is to process oil and gas.“

He has been present in BiH since 2011. To date he has established five firms in Banja Luka: CERS, Comsar Energy Trading, Comsar Energy Hydro, Energy Group Limited and Comsar Energy Agro. All are fully or majority-owned by his Cyprus-based offshore company Comsar Energy LTD.

By the decision of BiH Council of Ministers, Sardarov received Bosnian citizenship on Dec. 21, 2011, as a major investor.

He told CIN that he’s been rich for years.  “I’ve been a billionaire for years and I’m not ashamed to say so.” Asked if it ever crossed his mind that he’s rich enough and that he’s fed up with money, he answered:

“I have enough to live on, but I feel alive as long as I work.”