Saving the Bank at Any Cost

Despite the advice of the World Bank, the government of Montenegro refused to seize the bank controlled by the family of former Prime Minister Milo Djukanovic even though a low interest loan hung in the balance. Instead, it spent two years trying to remove government funds from the ailing bank. 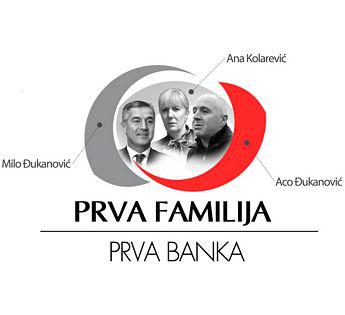 Montenegro was not able to access €60 million in a low-cost World Bank loan for almost two years because state officials had not met the organization’s condition that they either fix First Bank or remove state funds from the bank controlled by the family of former Prime Minister Milo Djukanovic.

The World Bank in 2010 told officials they were “deeply concerned” that the state was still exposed to significant fiscal risk because of state deposits left in the bank 17 months after a state bailout.

Montenegro could have righted things by recapitalizing the bank with money not connected to the first family or by seizing and liquidating the bank. Instead, officials took two years to meet an alternative condition of removing all central government money from First Bank.

The World Bank felt the government was making enough progress to release the loan in late 2011.

A recapitalization or seizure would have meant the Djukanovic family could lose some or all of its significant investment in the bank.

When a similar request was made of the International Monetary Fund (IMF), it was more blunt than the World Bank and demanded that the government take over First Bank as a prerequisite to even negotiate for loans.

Instead, the government gave up on low-cost loans and opted to pay higher interest loans from commercial banks. The move cost taxpayers millions and contributed to a tripling of Montenegro’s foreign debt.

First Bank was the bank that was not allowed to fail.

In April 2009, the government said negotiations between the World Bank, Ministry of Finance had begun. The country, like many around the world, was dealing with the fallout from a global crisis characterized by a tightening of credit, falling real estate prices and stagnating economies. The World Bank was promising favorable loan terms.

According to a letter from the World Bank to the ministry the Organized Crime and Corruption Reporting Project (OCCRP) has obtained, the primary obstacle to getting the loan was the First Bank. The World Bank made it clear that any loans would be conditioned on either cleaning up management and ownership issues with the bank or removing government money from the bank.

At the time, officially 31 percent of the bank’s deposits were from government sources although later the Central Bank would find these numbers were badly underestimated because the bank had been counting state companies as private companies. The share of deposits from government bodies was more likely around 50 percent of all deposits at the bank.

A second search for funds started around the same time when Central Bank chief financial expert Nikola Fabris said it was time to look outside of the country for solutions. An IMF loan, he said later in local media, would be the most cost-effective way to drag the country out of the economic doldrums.

The IMF was willing to enter a standby loan agreement, but during preliminary talks, the global lender raised three conditions, two of which centered on First Bank, which they said was severely undercapitalized and illiquid.

IMF European Department Director Marek Belka wrote to Finance Minister Igor Luksic that “intervention in First Bank needs to be immediate and decisive,” according to the letter obtained by OCCRP.

Belka said that in order for the IMF to issue a loan, the government and the Central Bank needed to “Take over [First Bank], prepare it for restructuring, and install new management with an impeccable reputation of integrity, extensive banking experience, and independent from the bank’s new owners.”

This rigid condition may have proved a deal breaker. Montenegrin authorities did not pursue the deal. In the weeks that followed, press accounts portray the government as negative about cooperating with the IMF.

Work on the World Bank loan continued but the organization refused to lend any money until First Bank shaped up.

“Efficient remedies for First Bank represent the most important and most urgent challenge for the responsible authorities in the banking sector,” World Bank officials wrote in a June 2009 report. “This bank stopped functioning in regular fashion in fall 2008 and it is unable to fulfill its obligations to the depositors.”

“This is of great significance in order to regain public trust in the banking sector, protection of state interests, and reduce the effects of further contagion,” said the June report.

A month later a World Bank team visited again for negotiations for the loan.

“The tangible progress in resolving the problem of First Bank represents the key prerequisite for getting the loan,” they wrote in a September 2009 report. The mission identified the following course of action: recapitalization by shareholders or new investors, nationalization of the bank, determining some other solution in agreement with the Central Bank or bringing in a guardian or interim management. They set a deadline for the end of December.

The World Bank also warned again that the dependence of First Bank on government deposits, then at €98 million or 31 percent of the bank’s total, was problematic.

“Considering the ownership structure of bank, the government should consider again the appropriateness of those deposits which could be interpreted as additional state support through an unpaid loan of €22 million which the bank got from Ministry of Finance.”

First Bank managers told the World Bank that they would be able to significantly improve liquidity in 2009 as a result of an expected €100 million from the privatization of EPCG and additional measures.

The World Bank assessment team worried that the effect would be only temporary, as it did not solve the “deeper problems of liquidity or corporate management.”

The World Bank recommended that the government order all state institutions, including companies and non-profit institutions under the control of the state, to not increase deposits in First Bank.

The government did the opposite. In July around the time of the meeting, First Bank had €5.2 million in government deposits. By August that had increased to €15.6 million, €20.6 million in October, and €22 million in November despite follow up letters. Deposits finally dropped to €18 million in December.

The World Bank also wanted to clear up conflicts of interest between the bank and the government.

“We expect that prior to negotiations the authorities will address the inherent conflict of interest between [First Bank’s] ownership structure and the bank’s dependency on state entities for its funding, by adopting a time bound plan for withdrawal of state-related deposits,” wrote Jane Armitage, the regional coordinator for Southeast Europe and Central Asia, in a letter dated March 18, 2010.

In a progress report from May 2010, Gan-Peter Olters, director of the World Bank in Montenegro, said, “In addition to the apparent capital deficiency of first bank, the mission remains deeply concerned regarding the size of the state’s direct and indirect exposure to First Bank, which amounted to approximately €139 million as of 31 March 2010.”

Others added “The mission is disappointed that despite its repeated advice, no action appears to have been taken to reduce the state’s exposure to First Bank, which has in fact grown significantly since the matter was first discussed during July 2009 visit.”

But the government finally was able to get the World Bank to relent through promises.  In July 2011, the government had €17 million in First Bank, and €8 million in other banks. It announced that it had already withdrawn €10 million, and committed to withdrawing all state deposits within the year.

Finally in September 2011, more than two years after negotiations began, the government signed a loan contract with the World Bank for €60 million as development support for its budget. The terms were favorable: a five-year grace period, and a 2.7 percent interest rate.

But it took the government two years to address the issues. In the interim, it took expensive private loans. During this time, foreign debt more than doubled. From roughly the time it began negotiating with international lenders in June 2009 to when a World Bank loan took effect in April 2012, the foreign debt of Montenegro grew from €553 million to €1.2 billion. That number represents 35 percent of its gross domestic product, a value considered high.

First Bank’s current condition is not known. It has never filed its 2008 and full 2009 audit as required by law – it published only nine pages of 2009. The Central Bank said it never received its 2010 report and the court has refused access to OCCRP of the company file.

A spokesperson for the World Bank said the bank is satisfied with the progress of Montenegro. First Bank did not agree to an interview request nor did Luksic.