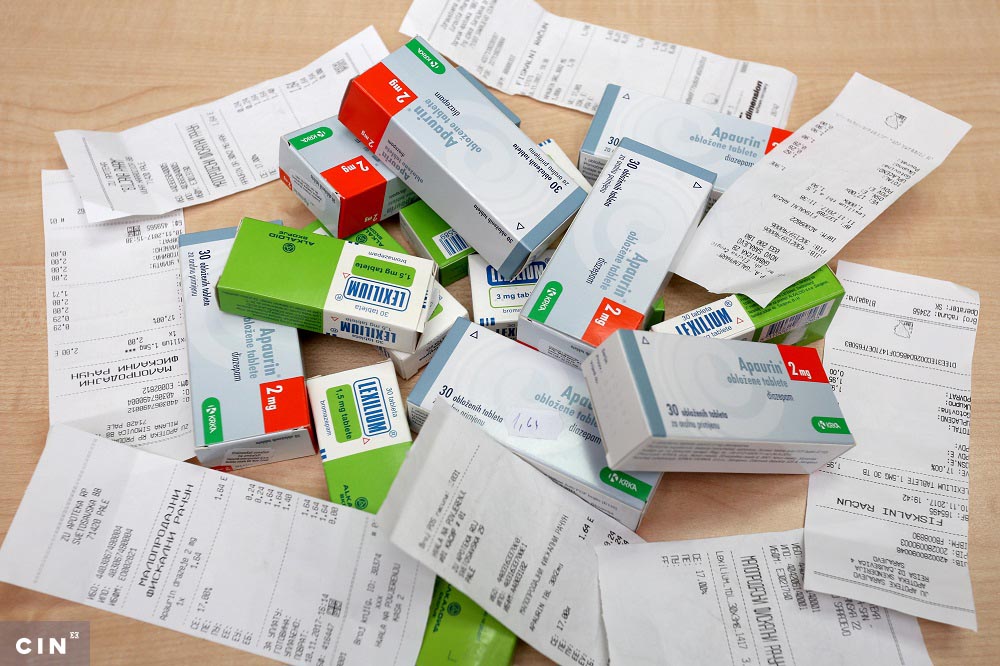 NOTE: This story was authored by student reporters working under the supervision of the Center for Investigative Reporting in Sarajevo as part of a Sarajevo-based Mediacenter’s program titled: “Free Voices: Advancing Freedom of Expression and Media Freedoms in BiH”.

In 14 pharmacies in Sarajevo and East Sarajevo, reporters bought without prescriptions medicines that could be used as narcotics. By selling medicine that required prescription orders, pharmacists violated the law on the prevention of drug abuse, found a group of young reporters during an investigation conducted under the auspices of the Center for Investigative Reporting in Sarajevo (CIN).

Over three days, reporters visited 46 pharmacies in Sarajevo and East Sarajevo. In 14 pharmacies they bought Valium and Lexilium without prescriptions. Some pharmacies did not issue receipts for drugs and in that way also violated tax regulations.

The active substances in Valium and Lexilium – diazepam and bromazepam are benzodiazepine drugs from the list of psychotropic substances. The Law on Prevention and Suppression of Abuse of Narcotics in Bosnia and Herzegovina (BiH) treats them as narcotics. Serious drug addicts use them. These substances can cause problems with coordination, memory impairment, blurred vision, confusion, depression, and other side effects. Dosage guidelines and administration information for Valium and Lexilium specify that they should only be sold by prescription. These drugs may also impair the ability to drive vehicles. 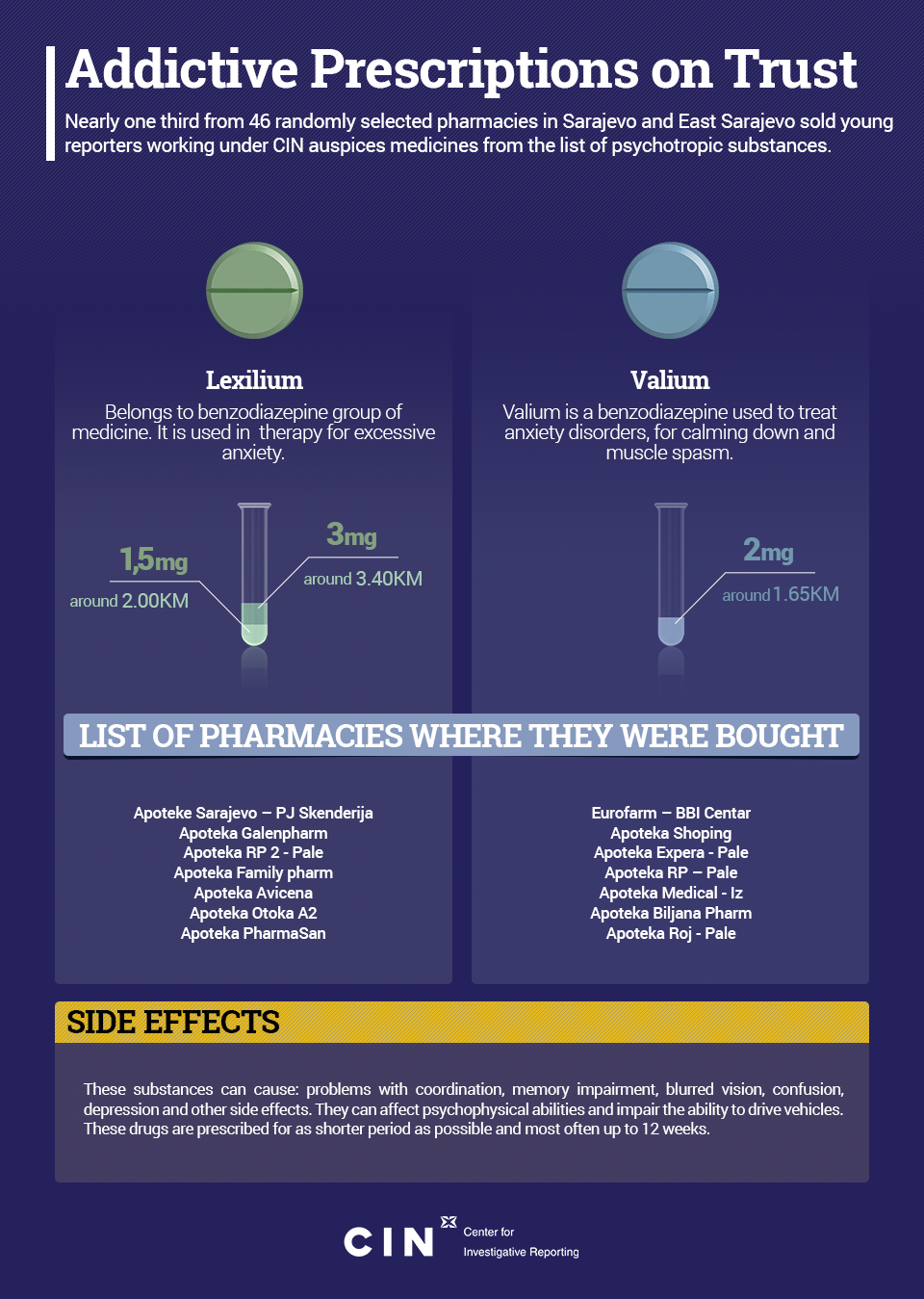 A 26-year old former drug user and a member of the Sarajevo-based Former Addicts Club, told reporters that as a minor he used to buy these drugs over-the-counter without prescription:

“No worries, what do you need that for, just show the money”. He started with two or three pills for fun and over time he reached 50 pills a day.

Later, he started buying large amounts in order to resell them. “In Lukavica (East Sarajevo) they would not give more than 20 packages, “ he said.

Benzodiazepine drugs can be addictive.

Chief physician Amir Balić, a neuropsychiatrist from the Sarajevo Canton Institute of Addiction Illnesses, said use of these medicine for longer than three months may be considered uncontrolled and “after that time addiction to benzodiazepine can happen.“

Balić said that ever more people are using benzodiazepine such as Valium and Lexilium.

When a reporter introduced herself as a student who had just flunked out of school, sxhe was allowed to buy three packs of Valium and two packs of Lexilium in five pharmacies in Pale. In each pharmacy she was first told a prescription was needed, then she was sold them anyway.

When the reporter met with the pharmacist afterwards, she explained that she did not issue a receipt because she did not take money, and she said she would try to get a doctor to fill out a prescription for the drug. Asked by reporters if that were possible without the personal data of a person who bought the drug, the pharmacist answered: “We often receive a piece of paper with the physician’s stamp, without the full name (of a patient) and we fill out the patient’s full name here.”

Two years ago, CIN published an investigation about the prescription drug misuse in Una-Sana Canton. CIN reporters uncovered that some doctors and pharmacists were billing the Una-Sana Canton Health Care Fund for medications never dispensed. One doctor issued around 600 fake prescriptions in a month, while some pharmacies added increased doses to otherwise legitimate prescription orders in order to bill the Fund for them.

A pharmacist from Biljana Pharm pharmacy in Pale has sold a 2mg Valium to a reporter. The head of pharmacy Biljana Gluhović explained later to reporters that when pharmacist takes pity on a patient, she gives medicine on trust.

Reporters also talked with Nevena Vuksanović, the pharmacist who sold the medicine. Asked how she would justify the medicine she had dispensed, Vuksanović answered: “I had on the side a prescription order in the name of my mother which she never picked up and I just used that.“

According to the BiH Agency for Medicinal Products and Medical Devices, around 7.3 million KM were spent on these two medicines in 2016, or nearly half million KM more than the previous year.

In Sarajevo, reporters introduced themselves as persons looking to buy medicine for their mother’s. In eight out of 26 pharmacies they bought drugs even though they did not have a prescription order.

The manager of a private pharmacy “Medical-Iz“ where the medicine was bought said that the staff “makes a judgment if a person lies or not, if he’s serious or not.” He said that he’ll cut 130 KM from a wage of the pharmacist who sold the medicine.

Zineta Čičak, the manager of Otoka A2 pharmacy told reporters that it was not possible to buy a medicine without prescription. When reporters told her that they managed to buy Lexilium of 1.5 mg, she answered that the pharmacy owner would make sure that did not happen again “even if somebody drops dead here.”

Senad Biberović, manager of the Club of Former Addicts, was a heroin addict. But he also was addicted to benzodiazepine. “In the meantime, I ended up five times at the emergency department because of benzodiazepine. More times than because of heroine,“ he said.

While buying drugs without prescriptions, reporters did not get receipts in six pharmacies – five in Sarajevo and one in Pale.

The laws on fiscal cash registers in the Federation of BiH and Republika Srpska stipulate that service providers must issue customers a receipt even if they don’t ask for one.