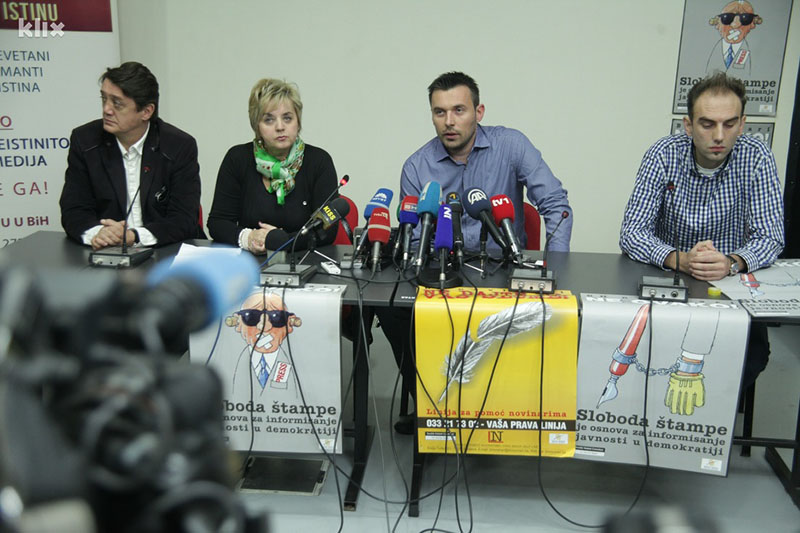 Journalists who have gathered today in Sarajevo in protest said that there were 400 registered cases of violation of journalistic rights and freedom of expression in Bosnia and Herzegovina (BiH) in the past nine years.

A police raid of Klix.ba premises assaults on crews of BN Television and TVSA; revoking of press credentials to BN TV journalists covering the Office of the RS President; and a verbal assault on the editors of the Tačno.net portal are the latest cases that led the reporters from across BiH to take to the streets in several towns. At today’s rally in Sarajevo the protesters released a list of demands and called on the authorities to prosecute illegal acts against reporters.

Secretary General of the Association BiH Journalists Borka Rudić said that their emergency phone line for journalists has recorded 60 physical assaults on journalists, including 17 death threats, over the past eight years. “Nine cases ended in final and binding judgments. Out of the nine cases, two were processed as criminal proceedings and the remaining as misdemeanors,” said Rudić.

She said that the law does not label death threats and assaults on journalists, as well as seizure and destruction of their equipment as criminal offences, but as brawls. “It is very important that journalist be seen as public officials at work,” said Rudić.

The editor of the Tačno.net portal Štefica Galić talked over a video link with the reporters that gathered in Sarajevo. She said that she felt neither safe nor sound after she had been verbally assaulted together with her colleague Amer Bahtijar in Mostar.

Director of a web-based portal Klix.ba Dario Šimić said that his media outlet filed a complaint because the police had recently seized the newsroom computers after the web site broadcasted a tape allegedly featuring the Republika Srpska (RS) Prime Minister Željka Cvijanović. “This is not an attack on Klix but on all media,” said Šimić.

One of the demands was that the government creates a more secure environment for journalists. “Basically, we don’t ask for anything special than the current laws to be respected and that we are allowed to work,” said Dario Novalić, the president of the BiH Press and Online Media Council’s Board of Directors.