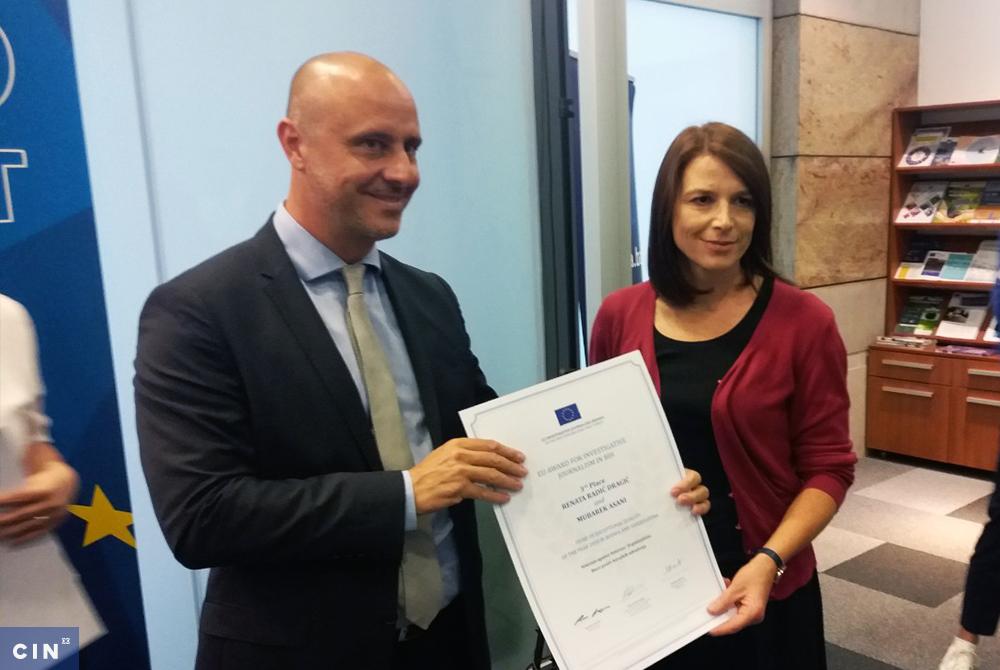 The awards were presented today at a ceremony that took place in the European Union’s Info Center in Sarajevo.

The award is presented in six Western Balkans countries and Turkey with a goal to promote excellence in investigative journalism.

This year’s call for applications featured 19 nominations, nine of which were shortlisted. The jury was made up of Davor Glavaš (Internews Balkans), Vildana Selimbegović (Oslobođenje) and Milka Tadić-Mijović (The Center for Investigative Reporting in Montenegro).

CIN’s story “Veterans Against Veterans’ Organizations” is a result of months-long investigation and collecting of records from all government levels in BiH. Reporters reviewed hundreds of documents – indictments, court rulings, financial and auditors’ reports and conducted several dozen interviews with veterans, and the representatives of the veterans’ associations, co-ops, relevant ministries and municipal and cantonal departments.

During the investigation, reporters uncovered that the authorities in BiH spent in excess of 83 million KM for around of 1,600 veterans’ associations over a six-year period. On top of this, around five million KM in grants was given away through veterans’ co-ops and individual co-op members as incentive for hiring former veterans and their family members. Some individuals kept money for themselves instead of hiring veterans.

Along with a video and two accompanying stories, we have published a database about the financing of veterans’ associations and co-ops to provide the public with access to this data.

CIN’s investigation into the financing of veterans’ association received yet another award this year from Anti-Corruption Network in BiH − ACCOUNT for best multimedia reporting on corruption.